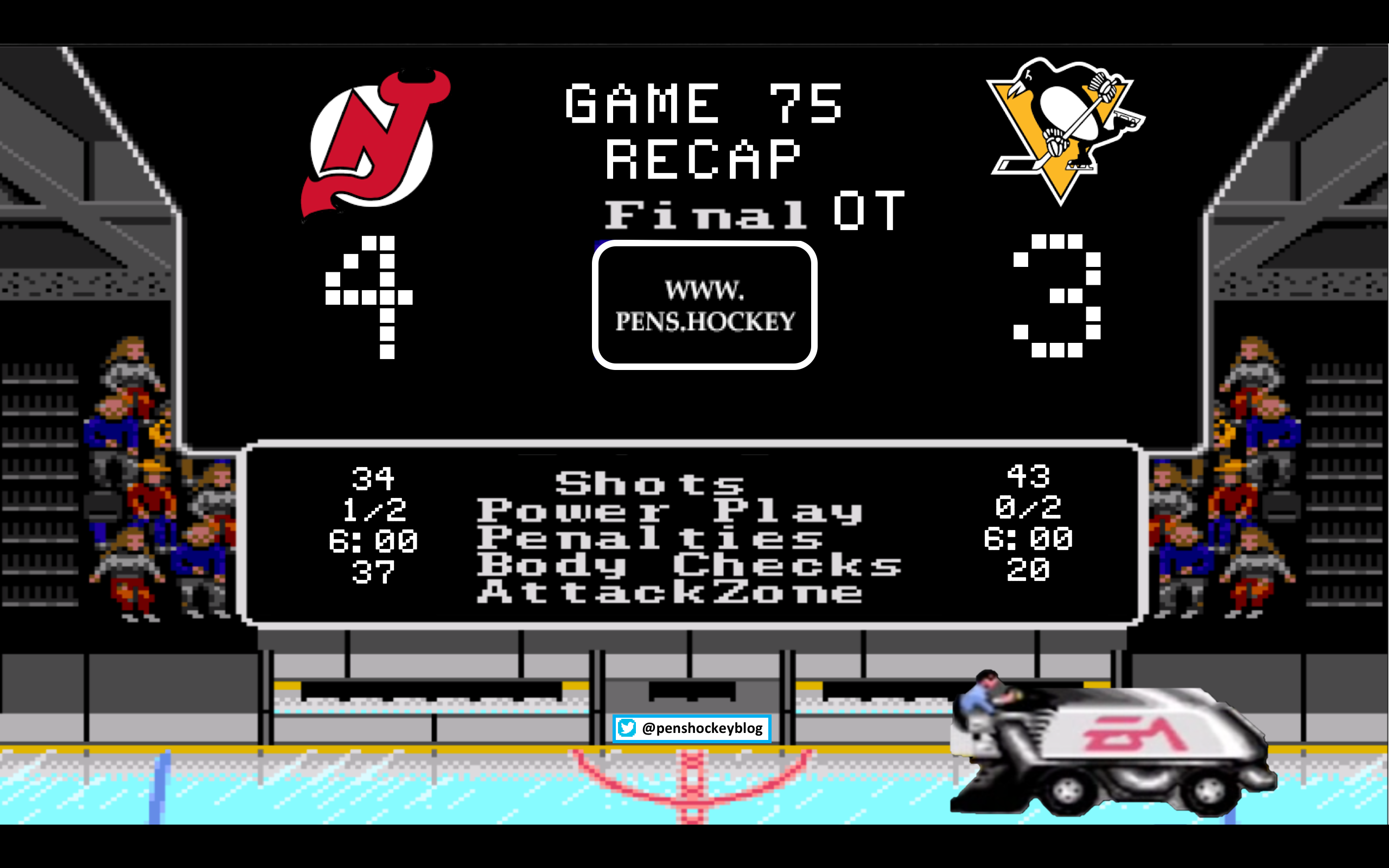 Stats linked to the banner

Coming into this game the Penguins had participated in a few matchups against bottom dwelling teams that brought their desire and focus into question. With this game circled for the last couple of weeks I mentioned that the way the Pens respond in this game would be a good measuring stick on if the team was truly just scraping by against Montreal and the Islanders or if there are bigger problems. Short answer, and you’re going to call me crazy, the Pens are fine.

The Penguins got the start we all wanted to see them get in this one as they were playing keep away right from the opening faceoff. After a few near misses the Devils appeared to clear the zone but a nice keep in resulted in the puck on Oleksiak’s stick, the big rig wasted no time in firing it to the net in the direction of Mr. Crosby…

The #Pens now have three players with 80+ points for the first time since the 2000.01 season. pic.twitter.com/Z1WXeVtnlH

Oleksiak with a really good play here to put this puck low looking for a deflection, of course he could’ve put this puck in Allentown and Sid most likely would’ve gotten a  piece of it. After the initial save Crosby has about 0.001 seconds to react with his skate then stick before Kinkaid can, unbelievable reaction time. Crosby with his 80th of the year (he would get his 81st later) meaning he is two points away from 13 straight seasons with more than one point per game.

The Penguins continued to pressure the Devils and 7 minutes into the period the shots were 10-2 Pittsburgh. Unfortunately for the Penguins Keith Kinkaid remembered that he was put on this earth to thwart them, and  all of the offense they created would result in nothing on the scoreboard. For what it is worth though, this was the best period of hockey Sidney Crosby has played in a very long time as he was everywhere and appeared to play at least 24 minutes int he period.

The Devils would eventually make up the shot differential but Murray was standing tall early on and we were heading to the break with a 1-0 game.

Here are your #NJDvsPIT numbers after 20 minutes of play. pic.twitter.com/LKLso9hHNK

The Pens had some carryover powerplay time to start the second, a scenario I am pretty sure they convert on 4% of the time and this would fall into the 96% failure rate as they could barely get the puck into the zone. After the conclusion of the penalty Bryan Rust was called for tripping and it would be the Devils turn with the man advantage. The penalty killers looked sharp for the first shift, then Will Butcher showed up to tie the game.

It should be mentioned that right before this goal the puck was under Tom Kuhnhackl for like 5 seconds while he was on all 4’s, he couldn’t find the puck but the ref didn’t blow it dead so New Jersey crosschecked Kuhnhackl in the face to free it up. Generally crosschecking isn’t legal but what do I know.

The Penguins had a textbook response to the goal as they put the pedal down once again and were all over the New Jersey zone. Unfortunately the Devils have copied the Penguins transition blueprint perfectly and when the opportunity struck 2 minutes after the tying goal they quickly turned it into a favorable situation with Sheahan becoming the lone defender.

Some attacked Murray for this play but we need to digest some things first. From a goaltenders perspective Coleman is leaning into the defender and on his backhand with one hand, instinctively Murray is expecting Coleman to make the power move to his forehand. With that in mind, Coleman not only takes the shot backhanded (hardest shot to predict for a goaltender) he takes it one handed, which Murray wasn’t expecting at all. Does Murray want it back? Absolutely, should he have been in better position and predicted this from a guy you didn’t know existed? No. Sometimes other players on other teams score really good goals, had Crosby scored this it would’ve been retweeted 2082024 times a minute.

The Penguins once again respond appropriately and drew a penalty one minute later in the offensive zone and look to be heading to the powerplay except…. Carl Hagelin was shoved into Kinkaid during the delayed call and the refs call him for goaltender interference so we went to 4 on 4. It is ridiculous that with everything else that can be reviewed in the game today a blatantly (and potentially game changing) call like this can’t be. The Penguins didn’t have time to argue before the Devils were once again racing with speed and Letang was caught chasing nobody and it was 3-1 as the Devils score for the third time in less than 4 minutes.

We want more of this! The third period is underway in Pittsburgh.

How to really mess up at your job, a play in 3 parts:

Initially coming down the boards Letang is in decent defensive positioning keeping Hall to the outside with his stick ready to deflect a shot while Dumoulin is between his eventual man and the goal.

Instead of the higher probability drop pass Hall decides to go for a heroic cross ice feed that was tipped into the air by Letangs previously mentioned perfectly positioned stick. In the image above the puck is in the air, Dumoulin looks like he will play it but again, the puck is in the air which is never a guarantee. Letang is watching the puck, he can see a Devil on each side of Dumoulin, he is in position to get in front of Murray and help Dumo out…

Instead he skates behind the goal leaving Hischier and Taylor Hall wide open. At this point Murray doesn’t even know Letang isn’t guarding Hischier and by the time he finds out it is too late. This is an absolutely confusing decision by Letang. Even if Dumoulin gets control of the puck what was he hoping to accomplish from being behind the net? 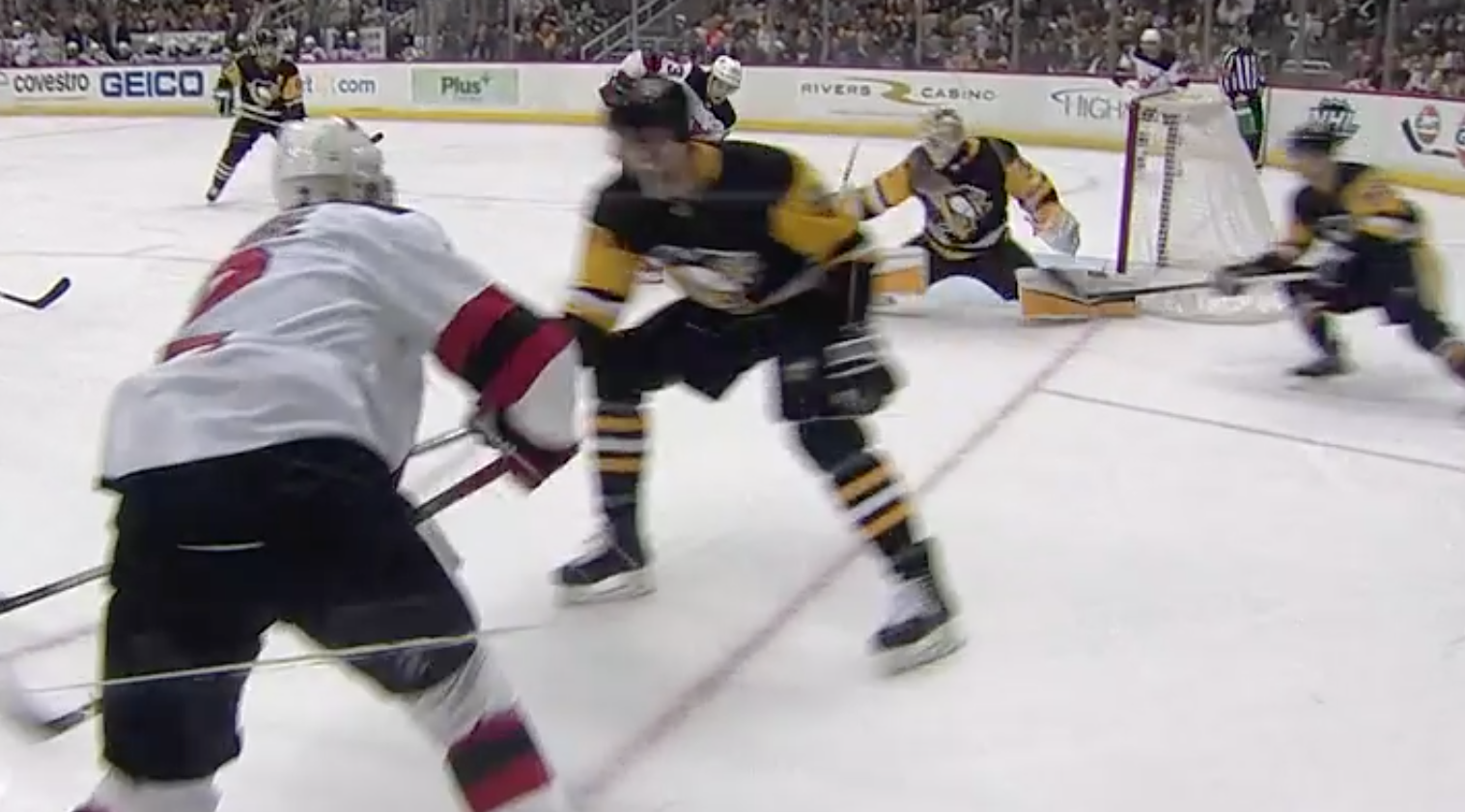 Even if this pass didn’t get to Hischier Taylor Hall, a man with 81 points was left wide open by Letang. You can sort of see in this image that Murray didn’t expect Letang to be behind the net and took an aggressive approach, it is better seen here:

Murray isn’t out of position here, he has to stay close to the post to block that off and he has to assume his defense doesn’t suck. He makes an aggressive leg jab to try to block the pass from getting through which was the only reason he looked out of position as the puck went in. Eve if Murray makes that heroic block with his leg on the pass Kris Letang is still behind the goal, Murray would’ve been down and Hischier and Hall would still be alone.

The Penguins would continue pushing but Kinkaid wasn’t having it and the period would end 3-1.

Even with the 3 goals scored by the Devils this was a really strong period by the Penguins, they just couldn’t get the puck by Kinkaid. I feel the score of the period was a little misleading to the overall play of the period as the Penguins in my opinion responded perfectly after the first two goals.

Heading into the third period down by 2 against the Devils is a death sentence as they are 27-0-2 with a lead after 2 period this season and 46-0-12 in that situation over the last two years under John Hynes.  Though those numbers are impressive did you know Brian Dumoulin can chug 5 beers at one time? He also doesn’t give a damn about no stinking records

Following the goal the Penguins tasted blood and they started going after Kinkaid at every stoppage. It became clear that this was a message in the lockerroom during the intermission as shift after shift the Penguins were in the Devils face and the intensity that had been missing in the last few games was front and center. The Devils did all they could to answer but the Pens weren’t letting them set up shop at all as they were tired of giving the Devils breathing room. After 7 minutes of pressure the puck came to our one balled savior and

If the hockey that followed in the next 9 minutes didn’t get your blood pressure up and your heart racing then you are watching the wrong sport. Back and forth these two went with crazy chances on both ends of the ice, it is sometimes inconceivable that the team that has played a watch the paint dry style of hockey my entire life is now entertaining. I assume there have been at least 5 heart attacks in the New jersey faithful due to this change of playing style. Somehow, some way this game would remained tied at the end of regulation.

After the fanatic final 10 minutes of the third three on three overtime promised to be even more exciting. Sometimes promises are broken however, and this would be one of those times. Kessel battled Hischier along the boards and appeared to have forced a turnover, which made Kris Letang jump up on the play. Hischier found the puck again and quickly hit Taylor Hall who was now alone in the center of the ice. Hall walked in and put one on net that Murray got a piece of but not enough and that was the game.

How to lose a game in 4 seconds:

Here Kessel and Letang are pursuing the puck while Malkin is with Hall.

After the 4 second puck battle Hischier looks up, Malkin hasn’t moved but Hall has slowly made his way to the other side of the rink. It’s easy to point the finger at Letang on this goal but Geno filled in for the defensive position as soon as he switched with Letang, Hall was Malkins responsibility from that moment on.

3 black shirts in a line with only 1 white shirt is not an ideal defensive formation as all three players (and Sid) realize the fatal mistake at the same time.

Sometimes it is hard to see through the results of a game to get an idea of the bigger issue, sometimes our desire for the Pens to win every game 5-1 because they have won a game 5-1 before blocks us from appreciating things that go right during a loss. Was this game everything I wanted to see from the Penguins? The response from the Pens after each Devils goal was the best it has been all season. The team had crisp passing and defensive zone exits with a great neutral zone presence on the forecheck. New Jersey is a fast team and the defense limited the number of chances. If the Penguins continue to build on this effort for the remaining games then I have no worries heading into the playoffs.