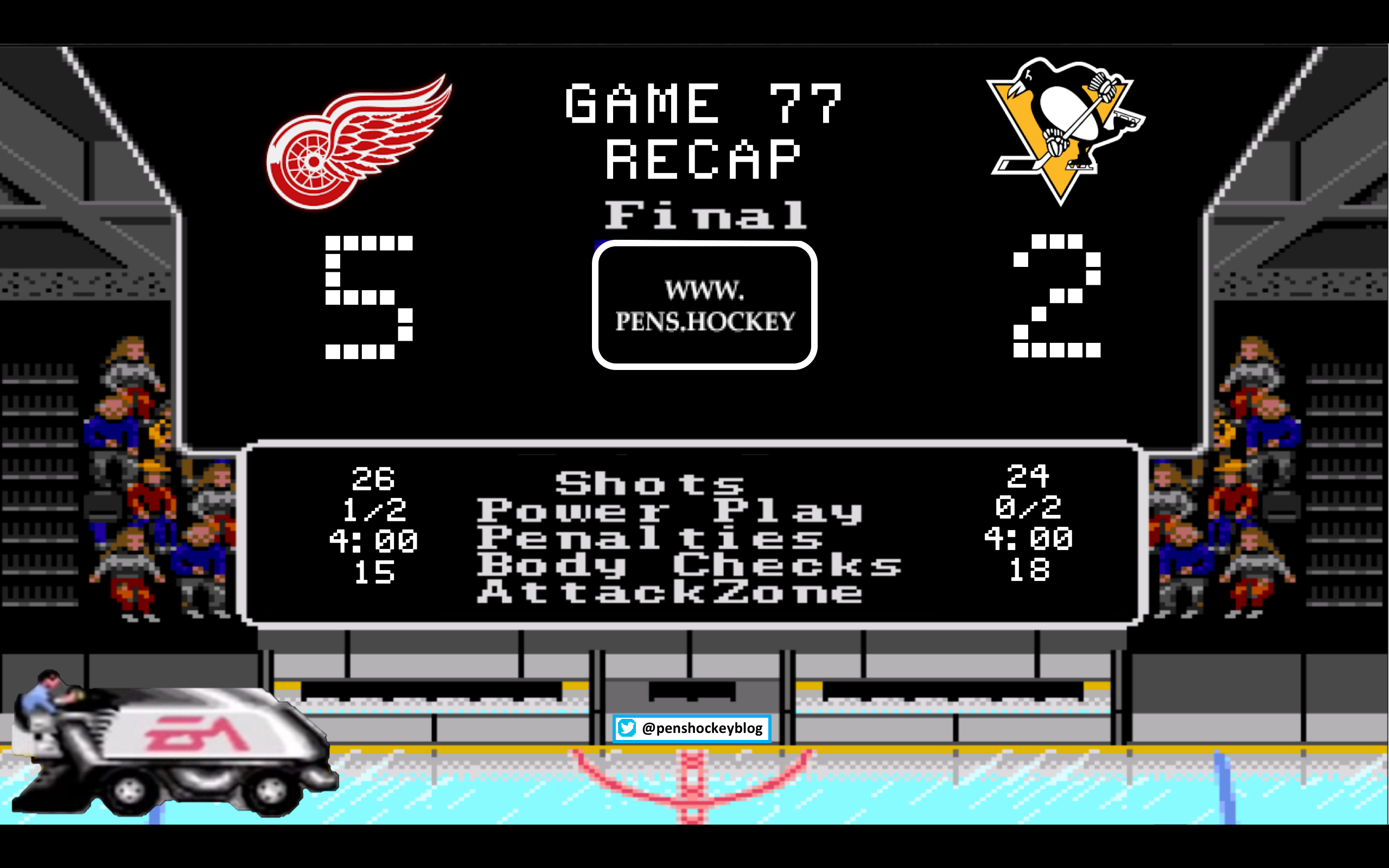 The Penguins went into Detroit and much like everyone in Detroit lost everything and left with nothing. Here’s how it went down.

Sheahan’s average TOI on the PK w/ Pens (2:41) leads the team and is a career high. Only other teams w/ forwards leading in PK average TOI are Florida (Sceviour & Mackenzie) and Vancouver (Sutter).

Does this say more about Sheahan’s PK skills or the lack of trust in any defender?

Hornqvist has 4+ shots in 9 straight GP (50 total), the longest such streak of his career.

Hornqvist has been playing some of his best hockey in March not only with scoring and helping out his line but also with getting in the middle of things and stirring the pot. He may be the heartbeat that gets the team ready for the playoffs.

Crosby is third on the team with a 52.3% (Rowney is 2nd with 52.9% but has taken considerably less draws than Sid). After that the team is behind the 8-ball as Malkin is sitting at a 44% and Brassard is 46.9%. This is why we will see Riley Sheahan sneak onto the ice for defensive zone faceoffs in the playoffs like we saw Cullen do last year.

Remember when Justin Schultz for a third was a win for Edmonton? After 3 years with the Pens and a +54 rating Schultz is still a -24 on his career thanks to a -78 in his 4 years with Edmonton. Larry Murphy though, 336 games played for the Pens, 78 goals and 223 assists for 301 points, damn.

It was hinted at over the course of the last few days and made official right before the game as it was announced that Zach Aston-Reese would be returning to the lineup.

The other switch was the flip-flop of Rust and Hornqvist once again as Sullivan continues to toy with things.

There was some slight hesitation on my part as I wondered if the Penguins would step on the gas early in this one considering the Wings played the night before, the answer was quickly provided.

Straight up Sullivan playbook right here, force the turnover, get the odd man break, deliver. There was a delayed penalty as Rust was hauled down right when the turnover occurred otherwise this could’ve been a 3 on 1. Of course with the way Crosby is playing right now this was essentially a 2-0 with an empty net, no offense to Howard.

The Penguins did not fall into a cocky shell which was nice to see and they continued pressuring the Wings. There were multiple chances for the Pens to score but they apparently hung out with Tyler Kennedy as no shots made it on the actual net. 7 minutes in momentum was halted when Bryan Rust took a tripping penalty but the penalty killers were aces. Zach Aston-Reese was teamed up with Tom Kuhnhackl as one of the forward duos and they were excellent together, not to be outdone Sheahan almost had a shorty.

Following the kill the Penguins would get a powerplay of their own but it was the definition of balls. The failed attempt actually took some air out of the Pens and Detroit started getting more and more shots on net. Eventually the puck went behind the goal and everyone on the Penguins decided they weren’t going to pick up Kronwall.

Around the horn to Kronner for career point 400. #LGRW pic.twitter.com/XUnzYNk5kf

Bob Errey was quick to point out that this has been an issue for the Pens as they seem to get lost watching the puck below the goal line and completely forget that other players exist.

Plays like this don’t fall on one player as this is an overall communication breakdown that needs to be addressed before the games really start mattering.

Following the goal the Penguins landed a few shots on net but nothing really to note and the period finished the way it started in terms of goal difference.

Numbers after the 1st period of play. pic.twitter.com/JruDmAkIiX

The first half of the second period was about as thriving as Detroits job market.

Then Sidney Crosby thought he scored, on further review it was determined that he didn’t. Personally I think everyone knew the puck crossed the line but there wasn’t video evidence to prove it so whatever. After that the Wings received a powerplay when Oleksiak high sticked someone and drew blood, the refs only gave the Wings a 2 minute powerplay and Bob Errey defended them saying it is a “gray area.” It’s actually a pretty simple rule, if there is blood of any kind, even if the player bit his lip, it’s a 4 minute penalty plain and simple. The Wings would get the Pens penalty killers jumping around like hookers on payday and it was a 2-1 game after Martin Frk faked the frk out of everybody.

That is one of the nastiest fake shot passes you will ever see, right to the tape, just a prayer for Murray at that point. The Pens responded with an Asians dick worth of effort and before we could get mad the Wings were scoring again.

#RedWings on the score sheet. #LGRW

Dumoulin caught in a tough situation here where he can either block the shot or give Murray a clear view of the puck, he opts to jump out of the way and it is the wrong decision; note that this is not the same as Letang on the Philly tying goal last game because Letang was actively trying to block the shot with his stick, here we see Dumo get out of the way. A point shot that is missed by the defenders and a deflection. Three times I almost always give the goalie the benefit of the doubt, powerplays, backhanders, and deflections. Powerplays and backhanders can get criticism if the play is squarely on the goaltender, getting upset over any deflection is a waste of your time. With that said lets go to Twitter. 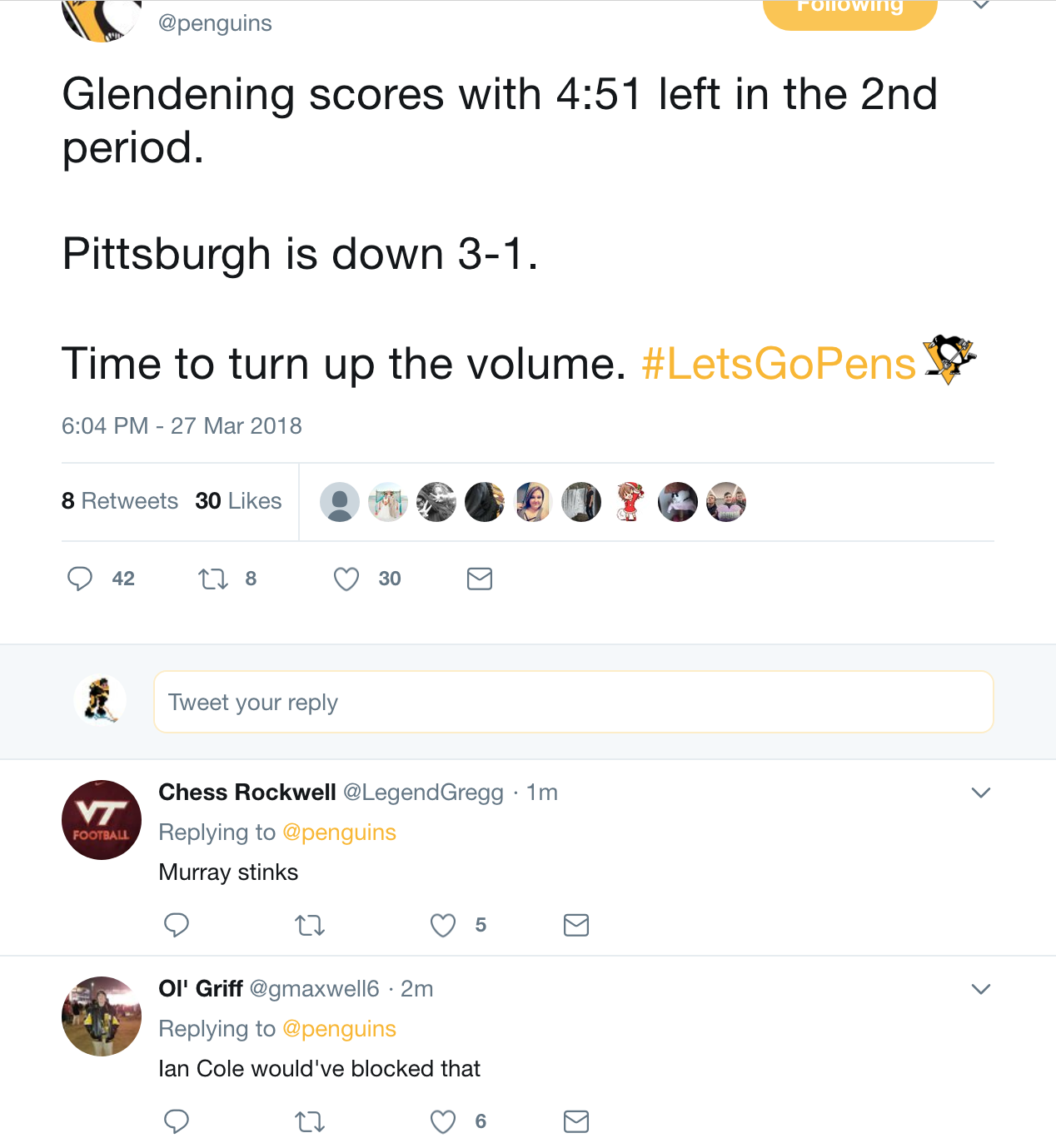 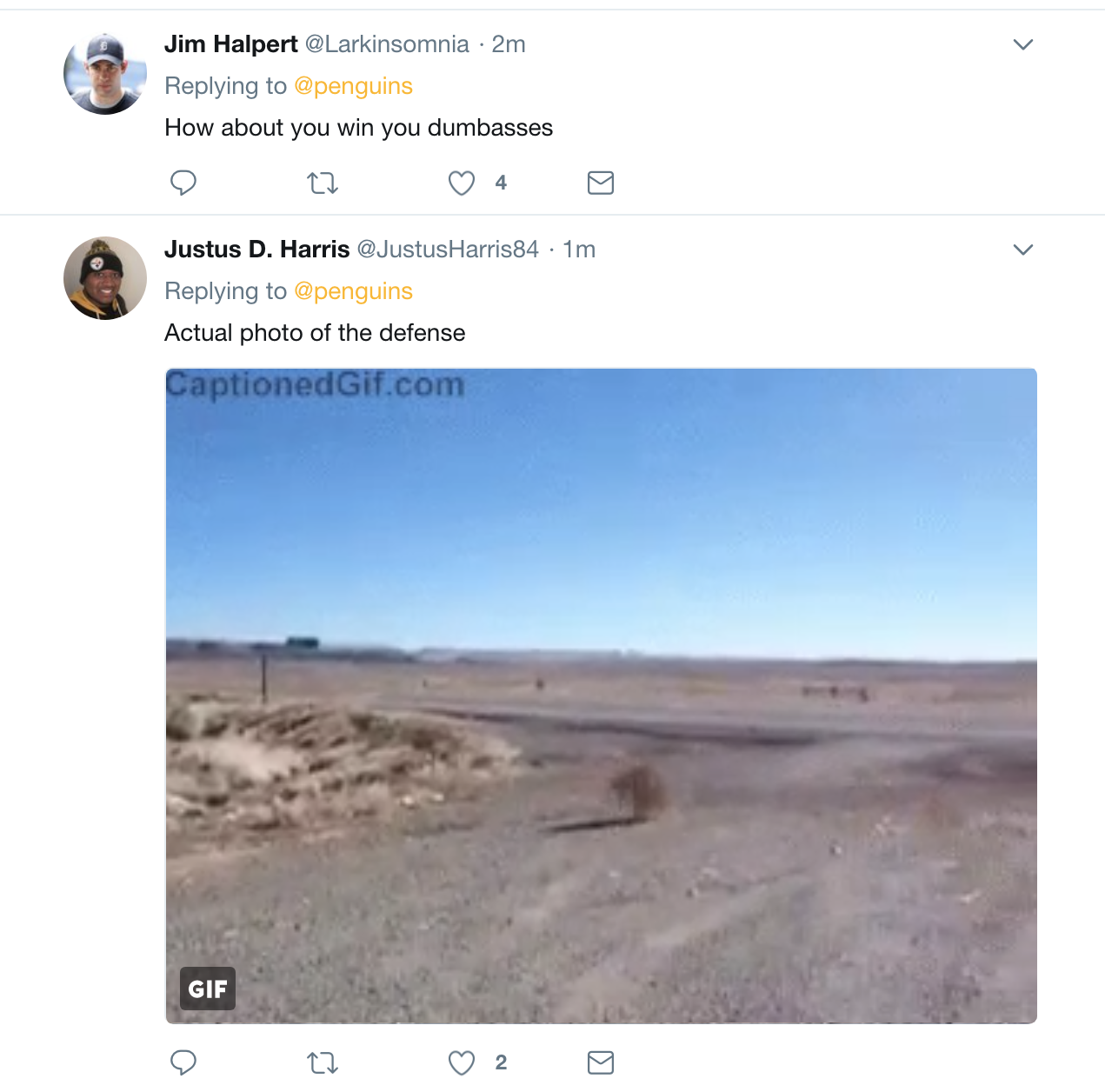 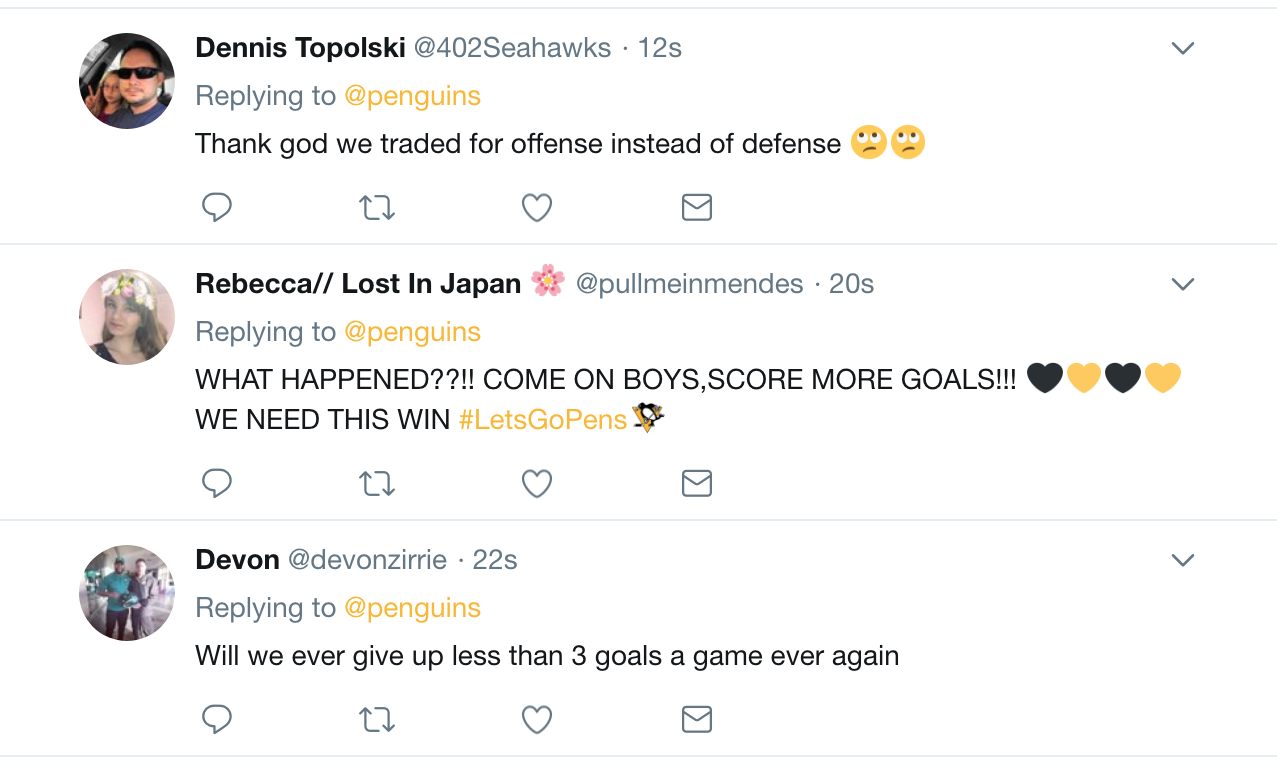 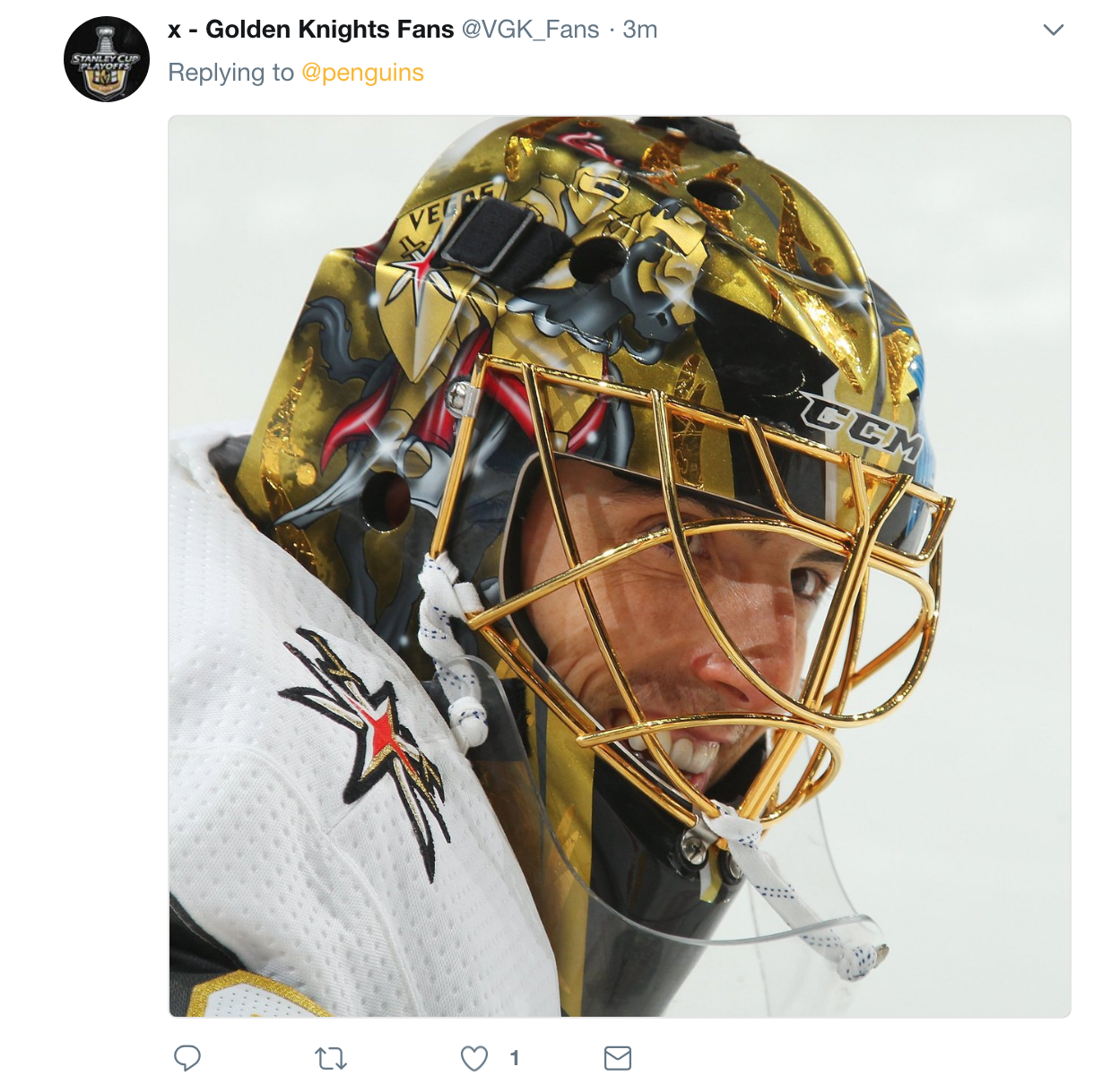 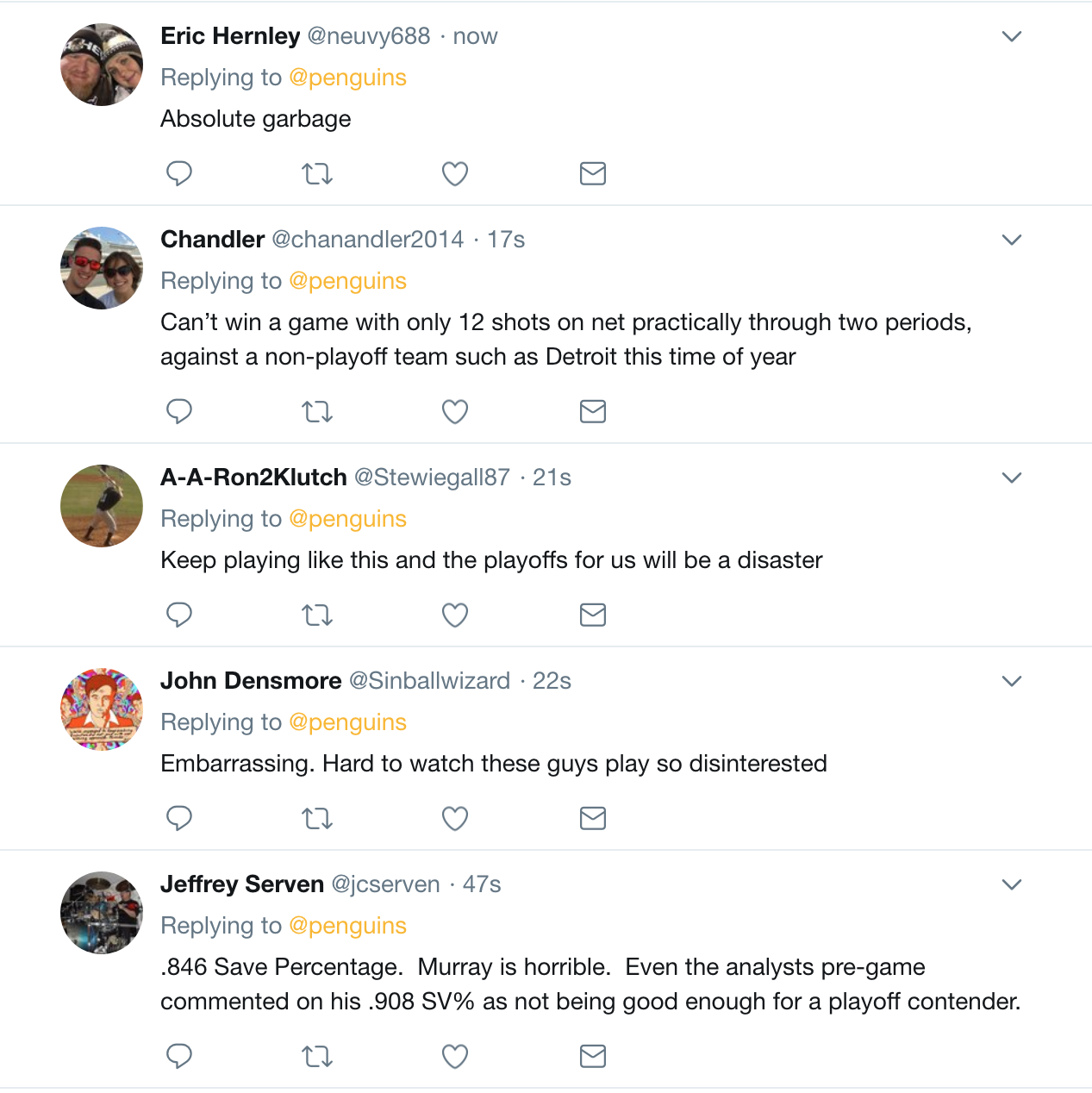 Well by George Jeff, if the analysts that pick the Capitals to win the cup every year said it then it must be true, it simply must.

The Penguins would try to get a goal before the period came to an end but it wasn’t happening and they would once again head to the third period trailing a failing team. 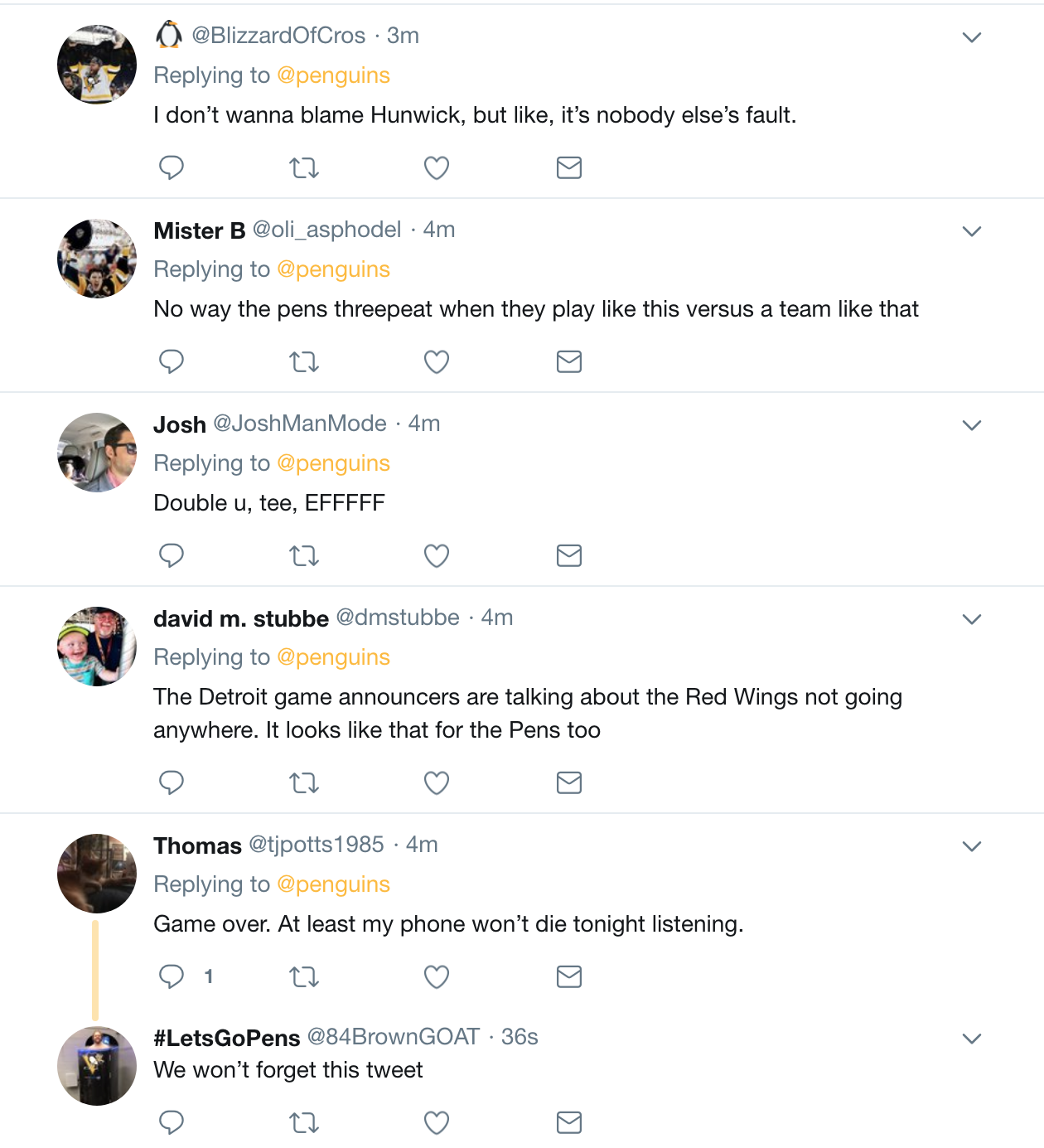 lol to that first comment. No way Pens repeat without Letang is probably something Mister B said last year. Josh needs to learn that commas aren’t used in abbreviations. Sick burn by Dave. Someone tell Tom you can get like 5 phone chargers on amazon for a buck.

If the Penguins wanted to get any points out of this game it would require a solid third period start. They were given an early powerplay chance and any thoughts of a comeback were answered by the effort given on that man advantage. The team was not interested in playing hockey in this game and it became evident following the powerplay when Helm scored after the Penguins decided defense was optional.

Can somebody backcheck? Nah, okay cool.

Here is a play by play of the following fifteen minutes:

Penguins get a shot on net, easy save

Sullivan makes the then comical move of pulling Murray with just under 4 minutes left, 30 seconds after that decision it paid off.

Malkin with the attempted pass that found its way to Letang and he actually put it on net.

The following faceoff saw the Sheary-Sheahan combination out for the Penguins so Sullivan left Murray in net until that line was off which I found hilarious, it’s the little things. Murray then headed to the bench when the top line was ready and Luke Glendening found the empty net to make it 5-2. 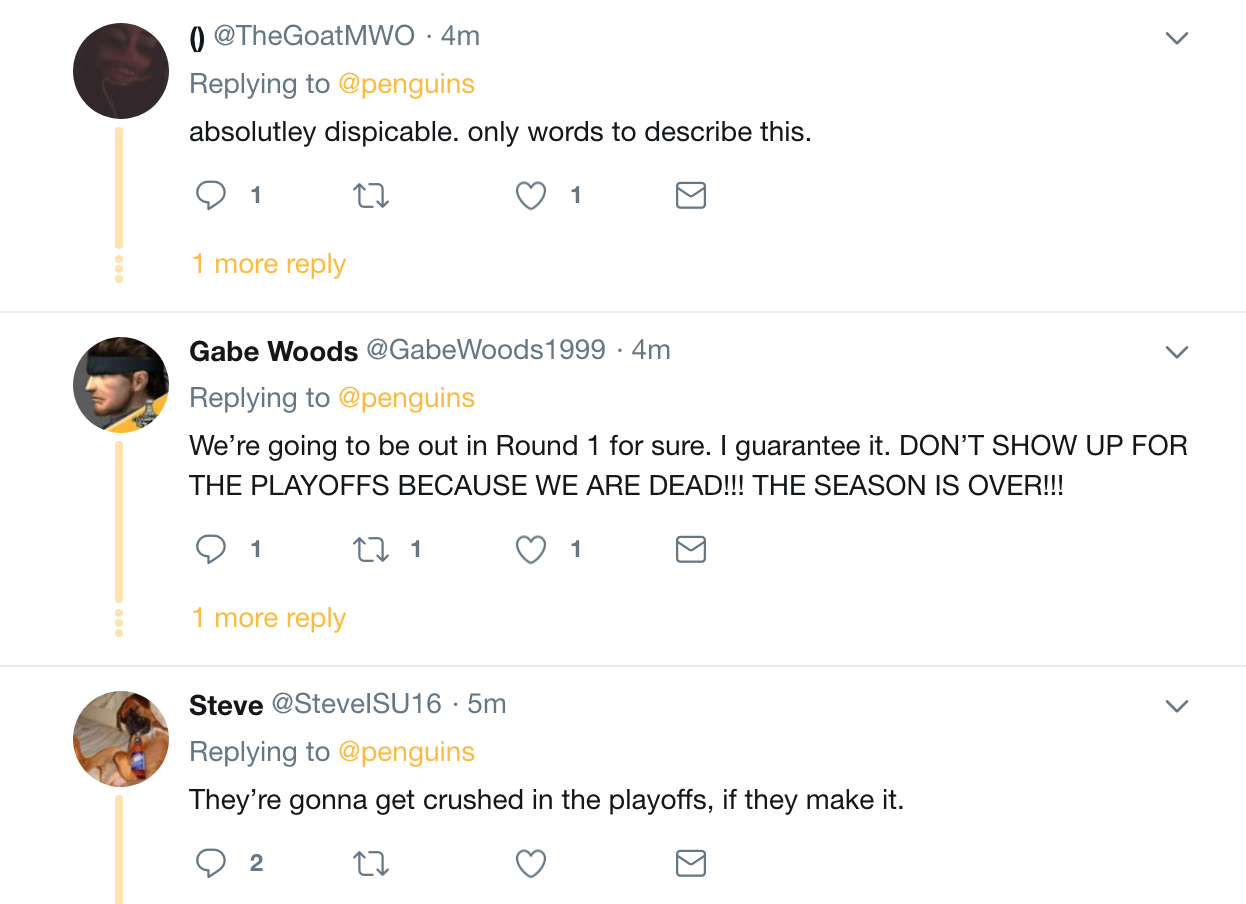