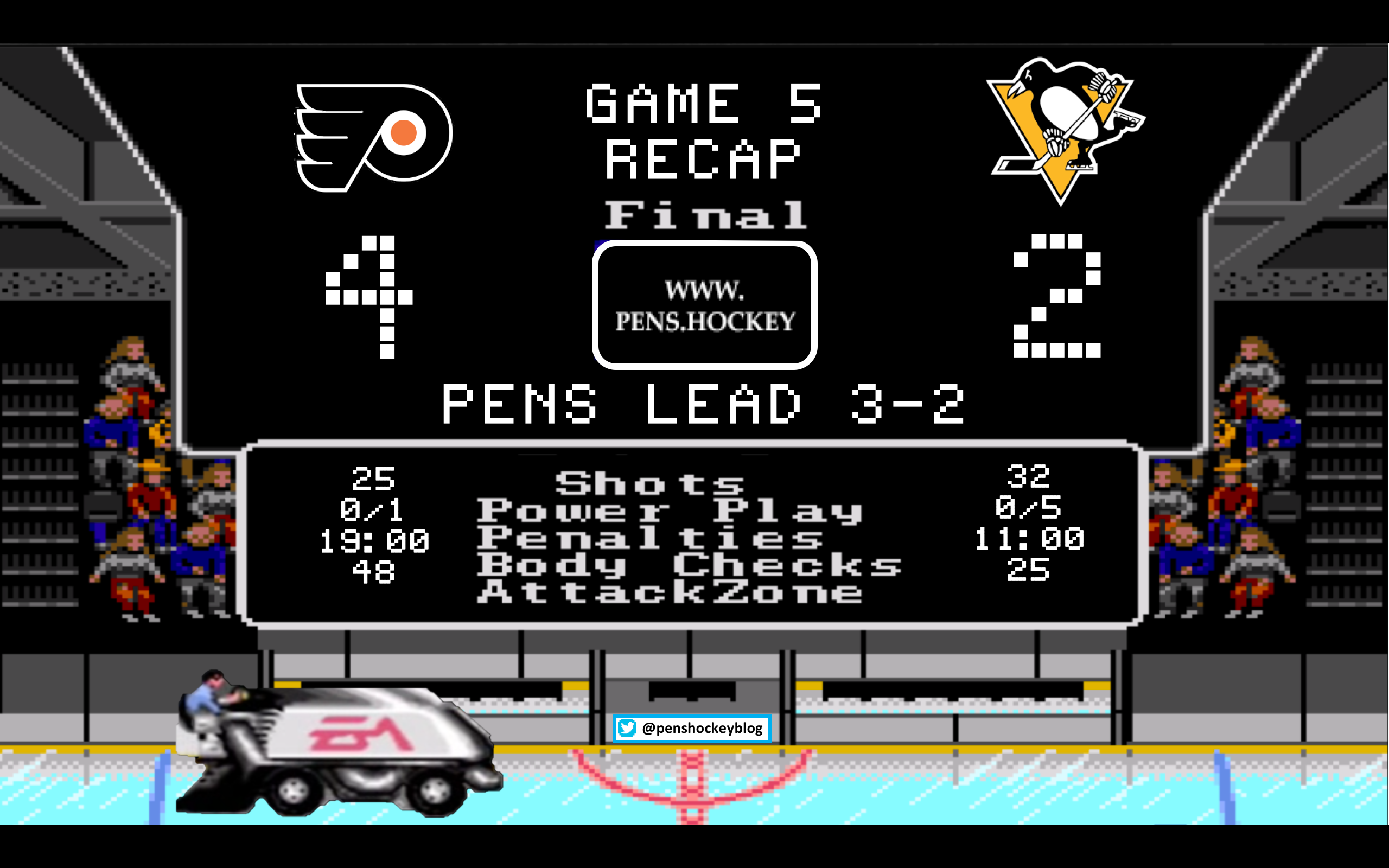 Banner is linked to stats

The Penguins home vs road record was constantly mentioned before the playoffs began as we were told how important the game against Columbus was. The Pens returned home Friday night for a chance to close out the series in 5 games. This is how it went down:

No changes for the Pens in the absence of Hornqvist. It is the postseason so you have a better chance of winning the lottery than you do getting updates on his injury status.

There was a stark difference at puck drop in this game compared to the other games of this series in terms of the crowd. The Pittsburgh faithful were cheering of course, but it wasn’t the same excited anticipation that we heard in game 1 and 2 and this was accompanied by a few prime empty seats in the lower bowl. Could be nothing, could be that first round hockey isn’t exciting anymore because we’re spoiled. Bryan Rust mentioned before the game that the team was hoping to feed off the energy of the crowd and get an early start to jump ahead quickly. The team opened the game pretty much exactly like the crowd and put together their worst 20 minutes of the postseason. Passes were missed by feet, not inches. There has been better communication between mimes than there was with the defense at times. The neutral zone was apparently lava. The sight of Neuvirth in net confused the Penguins into not wanting to shoot. The only thing that save Pittsburgh in the period is the fact that the Flyers aren’t that good.  Eventually in the final minutes the Flyers wold break through when the Pens hung Murray out to dry

Both defenders and a forward behind the net on one puck carrier initially is the type of mistake you see in Pee-Wee. Letang was originally at the front of the net and for some reason decided to leave his post to join the very capable Dumoulin incredibly moving both defenders out of the way for Giroux to have his pick of the litter.

Following the goal the Flyers played their best 3 minutes and completely put the Penguins against the wall. Murray was able to shut the door long enough for the Pens to be saved by the bell.

In the second half of the period Evgeni Malkin and Lehtera were going for a puck which resulted in Geno landed awkwardly on his leg:

This is kinda sorta technically interference but it is never called and I’m not upset it wasn’t called. Really odd decision for Geno to stick out his left leg like that as it almost looks like an attempted slewfoot. He would not return in the first but would be out to start the second.

The Penguins thankfully looked a lot more like the Penguins to start the second period as Mike Sullivan once again demonstrated that he has complete control of his room. The Penguins were slowly ratcheting up the intensity but the Flyers weren’t giving inuntil the 6:42 mark when Shayne Gostisbehere (my apologies to Shayne, I’ve been spelling his first name wrong all season because I’m fucking normal) took a slashing penalty against an outraged Evgeni Malkin. The Penguins wouldn’t cash in on the powerplay but it resulted in a huge swing of momentum that finally resulted in the Penguins looking like the dominant team in the series. The next 5 minutes was all about the Flyers holding on and they did what they could until the puck landed on Mr. Showtime’s blade.

This is such a great goal by Rust on so many levels, initially he uses a self bank pass off the wall to spin out of what would be a two on one situation against the boards. Then he protects the puck nicely as he heads behind the goal and finally he finishes with a wrap-around on his backhand that he is still able to curl into the goal. That ain’t easy, folks, pour me a tall glass of Youge Rusty Ale please.

Following the goal the arena and the team had life and the Penguins kept charging and just 79 seconds later the Pens were heading to the powerplay after Crosby may have gotten away with some embellishment on Gostisbehere to draw the holding call. TO be honest it was a questionable penalty call in the first place even with Sid falling and if anything it should’ve been matching minors. The Penguins would fail to convert on the opportunity so there was some poetic justice.

Following the powerplay the Pens continued looking sharp. The difference between the first and the second was the decrease in neutral zone breakdowns and the increase in precise passing, both of which were on display perfectly in the sequence that resulted in the Pens taking the lead.

There doesn’t seem to be a good gif of it but Dominik Simon received a pass to Crosbys right and made a super smart one touch pass to Sid in the middle. This opened up the quick swinging of the puck giving Guentzel time and space to make his decision as he goes 5-hole.

The Penguins were right where they wanted to be, the fourth line got a shift and ZAR pulled away for a breakaway which was fended off by Gudas drawing a holding penalty. I was pretty surprised at the call to be honest and it pains me to give Gudas any credit here but I thought he played the situation pretty well. The Penguins powerplay had a chance to put the dagger in and instead one minute into the man advantage Phil Kessel attempts a cross-ice pass along the blue line as the team sets up, resulting in a turnover and an odd man break the other way. The Flyers put the puck on net and Murray makes the initial save, then Kris Letang is about 10 seconds too late on the stick lift

Solid “Always Sunny” reference but his name is Filppula so it doesn’t make sense. Crushing goal for thePens powerplay to allow and the period would end 2-2.

The Pens put up 15 shots after only getting 5 in the first outshooting the Flyers 15-8 in the period. This was a really good response period by the Penguins as a mistake on the powerplay and some hot goaltending by Neuvirth were the only reason this thing was tied.

Throughout the third period the Penguins had the upper hand and looked destined to score but much like game two the Flyers were getting above their norm goaltending. I don’t complain about the audience often because I hate the whole fan police thing but there were times where the building was silent despite it being a tied game with the Penguins dominating. The Penguins had an early powerplay when Brian Dumoulin incidentally fell down and the refs incorrectly called Filppula for tripping. This was probably second only to game two in terms of worst officiated game, most of the calls went against the Flyers but yikes, what a shitshow by the stripes. The Pens didn’t convert on their 5th and final powerplay opportunity and the make up calls never game for Philly.

100% interference but so was Girouxs hit on Letang so we will go with Grover:

The play went on throughout the third and this game seemed destined for overtime. With less than 3 minutes left it was all but a sure thing until the Pens couldn’t get the puck out of the zone. Sheary attempted a short pass instead of clearing it out and Rust couldn’t handle the puck, it came to the point where Sean Couturier took a wrister in his heroic return that deflected off of Dumos skate and right over the glove of Murray

Unreal break for Dumo and Murray there as this puck was 100% going to be saved. The Pens would pull Murray and within seconds the puck was on Sids stick at the goalline

Just not enough distance for Sid to get enough air on this thing but a terrific save by Neuvirth who made Dave Hakstol appear to have brain cells after making him the starter.

The Flyers would add an empty net goal and we are heading back to Philly for game 6 tomorrow at 3:00 PM EST.