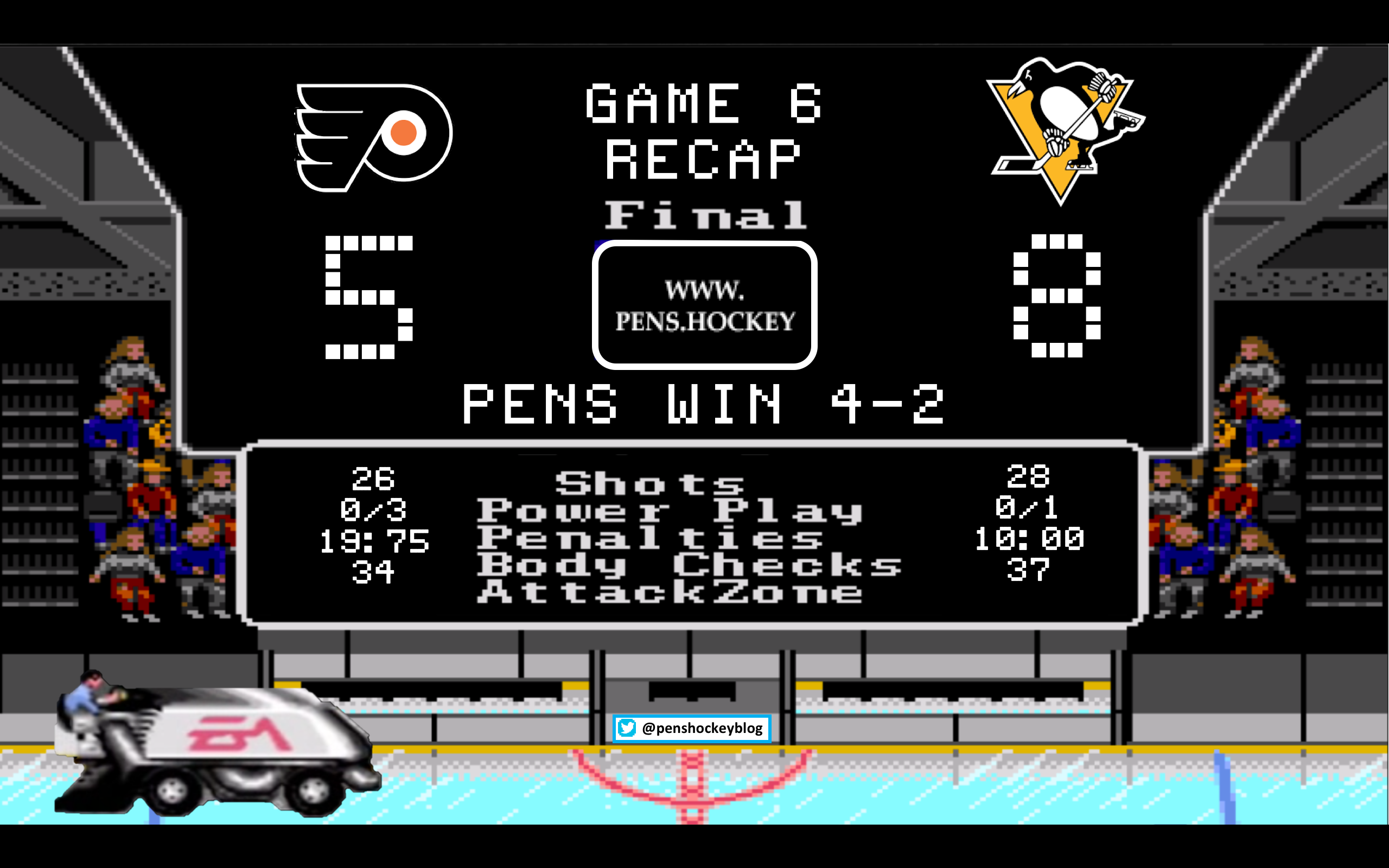 The above banner is linked to stats from nhl.com

A Sunday afternoon tilt with the Flyers in Philadelphia with a loss bringing a decisive game 7 back to Pittsburgh, this is a scene that would’ve frightened the hell out of anyone covering the Penguins 4 years ago. There were slight doubts circling the interwebs this time around, too. Many people predicted the Flyers would win this series in seven, bringing their 2012 series victory as part of the equation to success in 2018 while negating the Penguins recent history.

Mike Sullivan was one win away from winning more playoff series than any other coach in Penguins history. The Flyers were one loss away from not winning a playoff series since that 2012 series.

As the team touched the ice for pregame warmups the media went nuts as Patric Hornqvist took the ice wearing an “A” above his left breast, the crest of an Alternate Captain. For a brief second there was slight hope that Letang had been punished and lost his “A,” then the last person on the ice was Crosby, not Evgeni Malkin. Apparently too banged up from his nasty collision in game 5 to play in this game so the Pens ran with these lines in his absence:

The biggest talking point for the Pens and their coaches during the day off was focused on getting a better start in this game compared to game five. They didn’t take that lesson to heart as Sean Couturier was making the Philly faithful very happy just 2:15 into the game.

The puck is stopped by Murray and then sneaks through his legs where neither Ruhwedel nor Oleksiak can get a stick on it. I have absolutely no clue how neither of these players managed to clear this puck out. Not the start the Pens wanted and apparently the peeps on Twitter weren’t thrilled either: 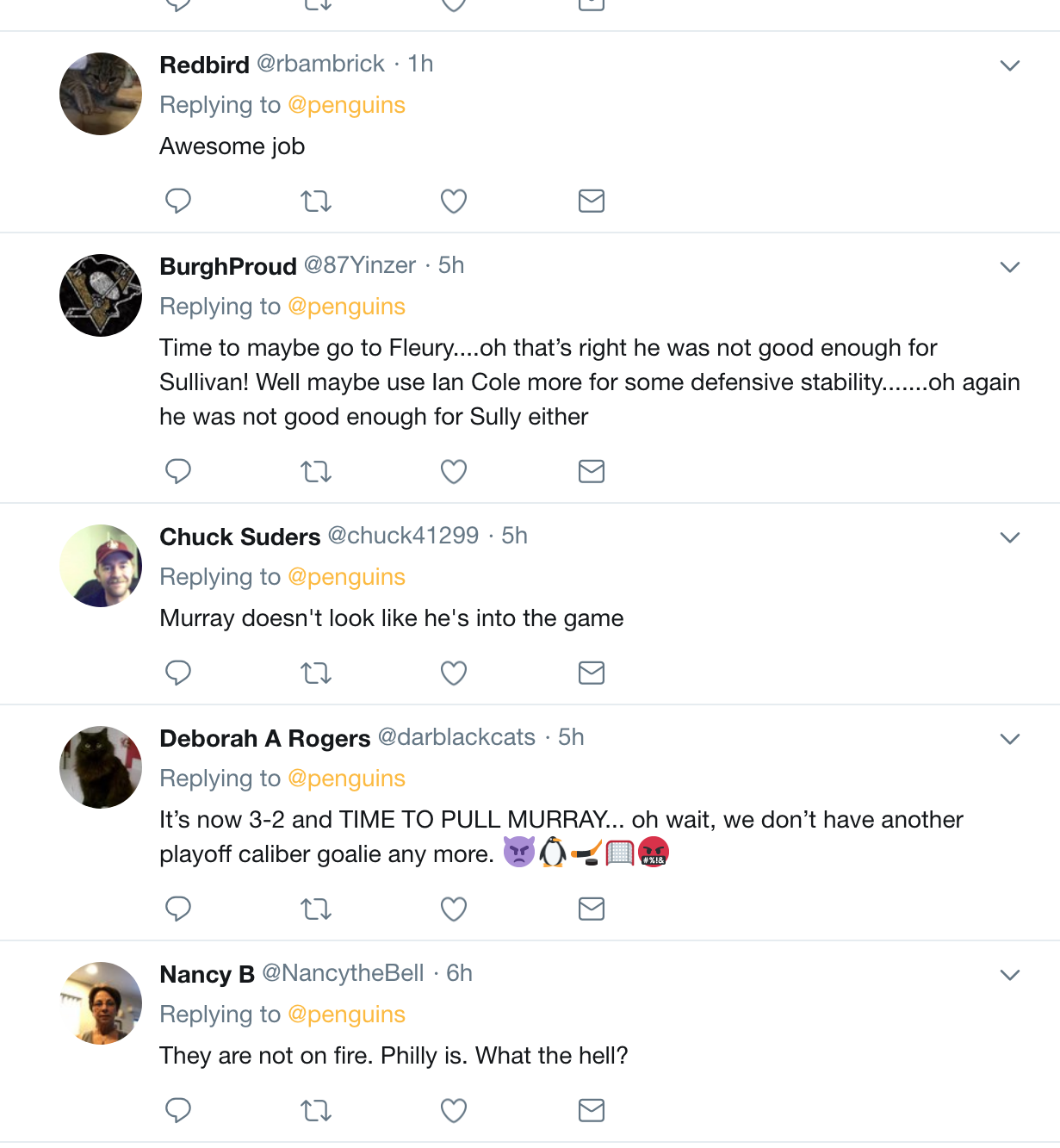 87Yinzer with some original thoughts

The Penguins started looking even mroe sloppy following the goal as the neutral zone sloppiness that started in game five continued. Finally a few stoppages later the Pens were able to take a deep breath, and just like he has done time and time again it was the Captain letting them know that everything is okay

Off of a clean faceoff win the Flyers break out into defensive covering and Vlateri Filppula forgets to cover the best player in the world.

The Penguins used their newly formed second line on the following faceoff, they got to the zone and just 47 seconds after the tying goal the champs were up by one

This is a nasty pass by Phil Kessel as he puts it between two blades and right on the tape of Hagelin, and I am glad this is becoming Hags go to celly because it is great.

The Flyers were caught off by the Penguins quick strike offense and the game settled down offensively for a bit as the physicality started to pick up. With just under 5 minutes remaining the Flyers had the puck in the offensive zone and cycled it up to the best defender in the world and he pulled a Blue Jacket and fired a cannon

Even the gif version of this shot is fast as hell, no chance for Murray here. Lets check in with Twitter after the Pens announce the tying goal: 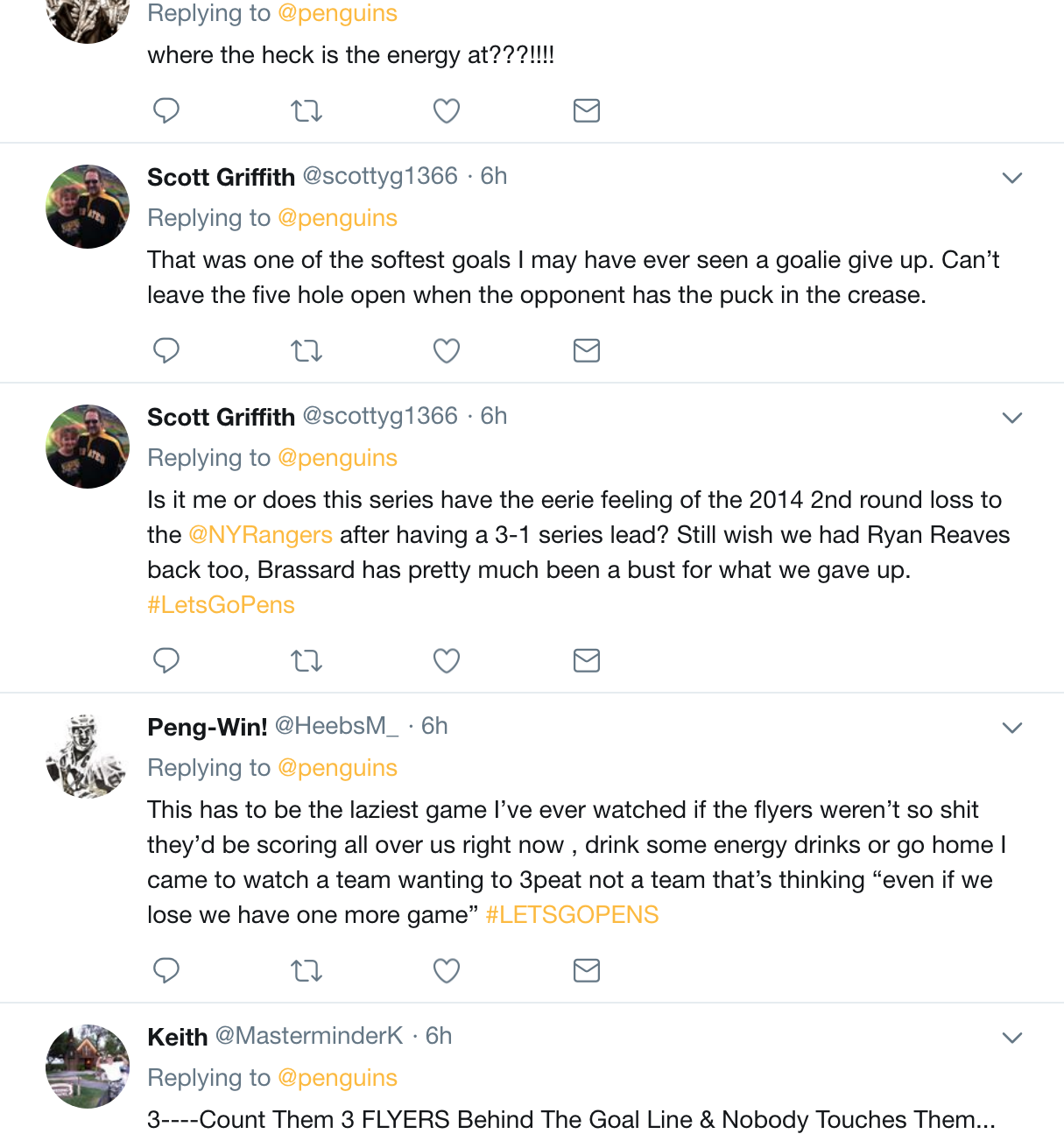 I’m not sure what these people were looking at

The Pens received a powerplay with 1:25 left in the period but couldn’t cash in before the horn sounded to end the first.

Despite being outplayed for large parts of the period the Penguins ended up outshooting Philly in the period. If you would’ve stopped watching after the Couturier goal you would’ve been thrilled as hell for this period to finish tied so that is the attitude we are rolling with.

The Penguins had 35 seconds of carry over powerplay time to start the second so they should be able to get to a better start in this frame compared to the second, so we thought. As the powerplay concluded Patric Hornqvist had the puck along the boards and looks for a East-West pass that was read perfectly by Couturier and he showed off some really good patience to beat Murray and make it 3-2 phuckers

The Penguins didn’t back down, then Claude Giroux continued his bullshit

Giroux doesn’t appear to leave his feet to make the hit and I’m not surprised there wasn’t a penalty called since it was right in that grey area of not quite interference but could be interference. Phil Kessel went after Giroux and was called for a roughing penalty… okay.

The Flyers didn’t score on the powerplay because it is as useful as a car without an engine. Once 5v5 play resumed the Penguins were completely out of sorts and there were some bad feelings brewing in the stomachs of those that bleed black and gold. Right after the powerplay concluded Sean Couturier took advantage of a slightly out of position Oleksiak and sent a saucer pass to Scott Laughton, Laughton ripped the shot right by Murray

This one is definitely on Murray as he is not on the angle he wanted and Laughton recognizes it. 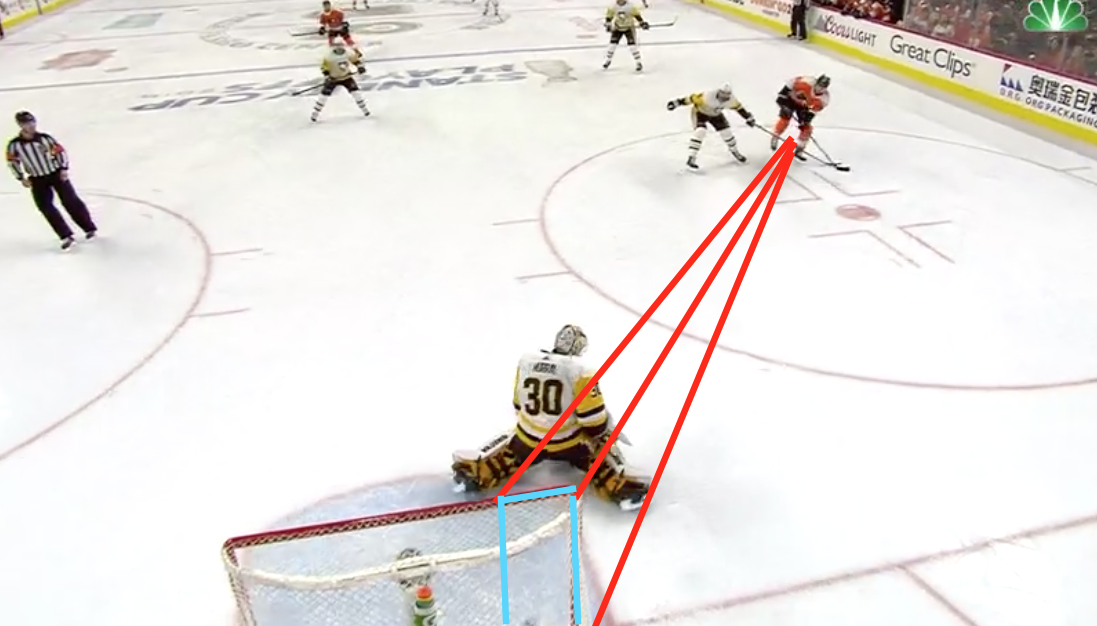 The following image is super blurry but you can see the opening I illustrated above clearly, Murray will want this one back big time. 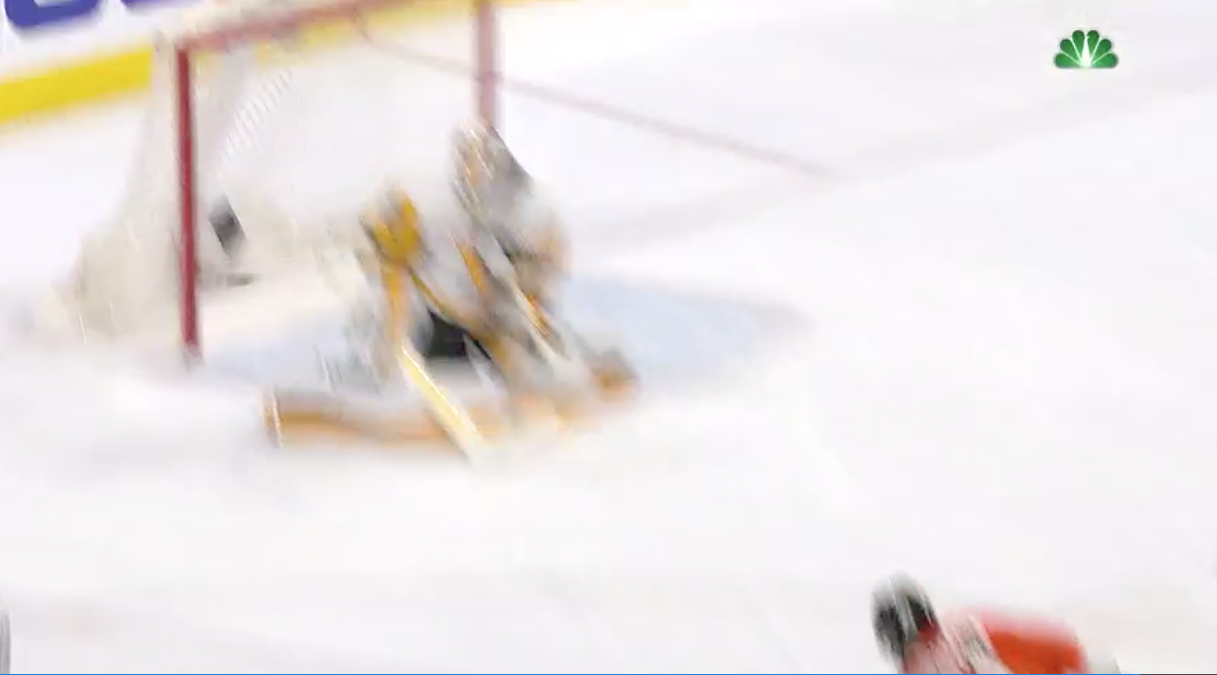 I wonder if anyone will bring up MAF on Twitter? 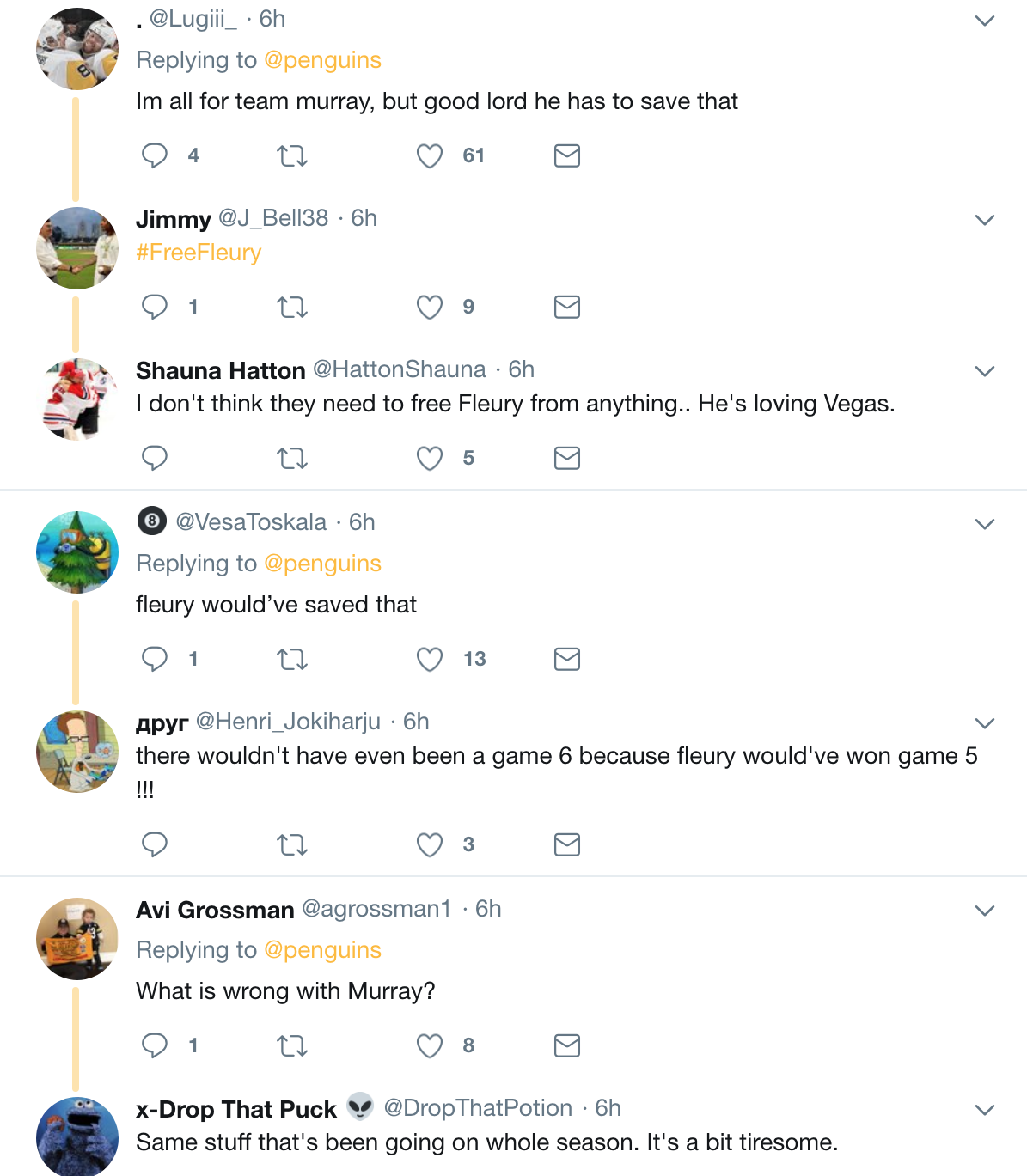 The beautiful part about this Penguins team is that they are never out of a game. They believe in their team and they know they have what it takes. Just over one minute after getting the 2 goal lead the man with the new “A” gets the Pens within one

Some unbelievable patience by Guentzel here to hold this puck until the poke check pulls Gudas square to Guentzel, opening up the legs through which he finds Hornqvist. Just a killer play by Mr. Playoffs.

The next 4 minutes looked like two hockey teams that wanted to lose and were trying their best to beat each other at losing. Sheary and Konecny would get into a cross checking match because why not?

As the period ticked down it looked like the Flyers would be taking a one goal lead into the third, it was around this time that I thought to myself that if they could somehow manage to tie this thing up before the period ended they would win by 20. With 51 seconds left it was the man, the myth, the legend cashing in to tie things up

Can you say elite freaking tip?!?! Absolutely nasty deflection from Guentzel here, thanks for teaching him this Sid. With that the Pens were even, nobody else would score in the remaining 50 seconds and the Pens would only be tasked with winning one more period to move on.

Just an incredible amount of character by this team to come back in Philadelphia after being down by 2, don’t take that for granted kids, it is not something a lot of teams can do.

This is just nasty by Mr. Kessel as he freezes Neuvirth like a wart leaving him to slowly wither away as the puck goes into the net, also like a frozen wart. Guentzel with an elite celebration and all of a sudden the Penguins just had to play 19:30 of shutdown hockey to move on.

The Flyers wouldn’t go away easy, turns out the teams in the playoffs are capable of playing hockey and there isn’t an easy win, especially when a team has their back to the wall. What changed was the Penguins became a wall through the neutral zone and the Flyers could not get anything on net. Twelve minutes into the period the puck was coming to Couturier along the boards and Kris Letang got to it first, enraging the Philly faithful as Coots went down, the puck went to Guentzel and he did not hesitate to fire away

It was an unbelievable play indeed. Everyone wanted a tripping penalty to be called, but Letang clearly hits the puck first. If this is a breakaway and the defender makes contact with the puck first it isn’t a penalty, nothing changes here. 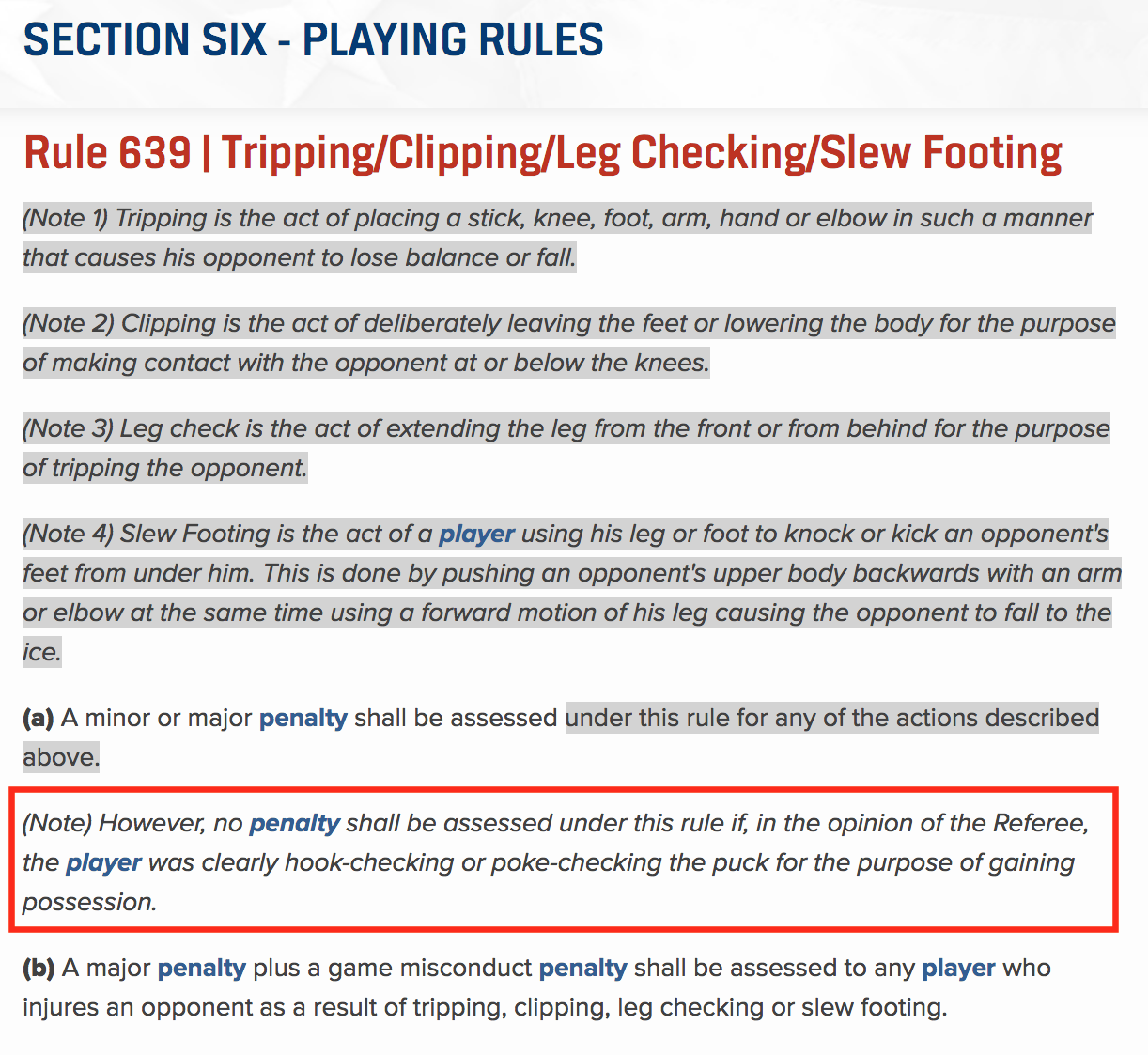 Sure if the roles were reversed I would’ve been pissed as well but I always try to justify calls when they go agains the Pens (see Giroux hit above), this may have been one of the only correct calls the refs made, even the NBC crew including Roenick said it was the right call.

ARE YOU KIDDING ME? Guentzel with four consecutive goals including two 10 seconds apart. What a performance. This is a perfect example of the Flyers, they weren’t prepared for the faceoff and the Penguins experience was just too much. Underrated pass by Hornqvist here too but the spotlight is and should be on Jake Guentzel right now 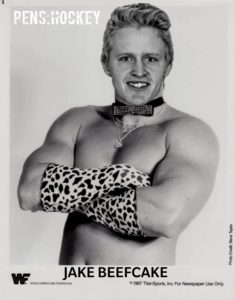 With a 7-4 lead the Penguins just had to play basic hockey. By the time there was 5 minutes left in the period the Flyers had managed just 3 shots on goal. That is the definition of Sullivan era hockey.

With 4 minutes left the Flyers pulled their goalie and would quickly convert to make it a two goal game with 2:53 remaining as many buttholes across western PA clenched up. The Penguins continued cutting off passes in the final 120 seconds until finally the puck game to Bryan Rust, Rust had his issues in teh regular season with empty nets but this is an elimination game and that is Rusts music.

The Penguins would shut the door the rest of the way. It wasn’t always pretty, it doesn’t have to be. The road to success takes 16 wins and no team in the history of the NHL has had the Cup taken away from the for ugly wins. For the Penguins, they move on and wait for either the Caps or the Blue Jackets. For the Flyers… 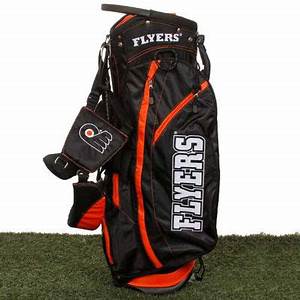 Enjoy the links, I hope you get to have a nice cold on on the 19th hole bragging about your 75. 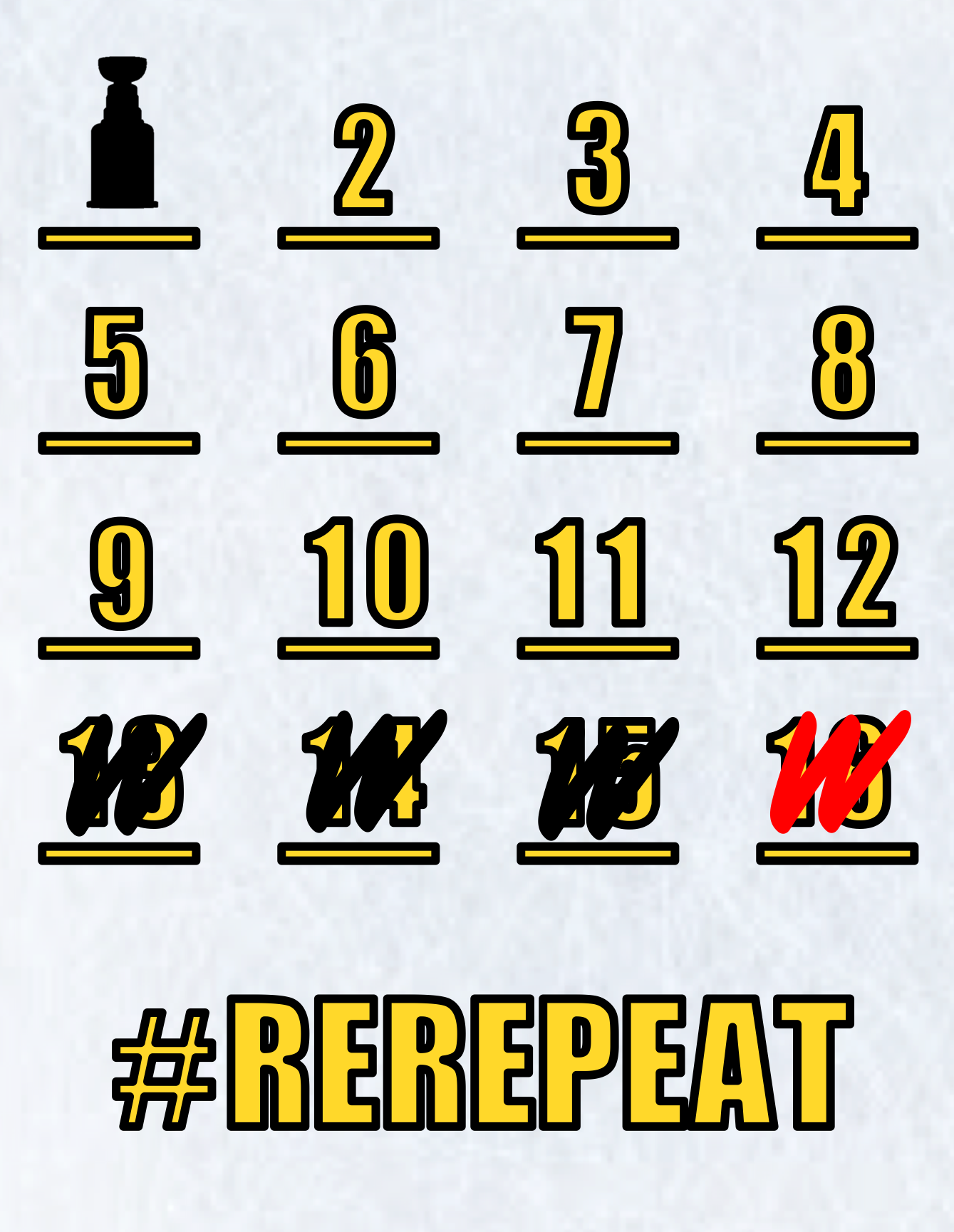 How’s that regular season road record narrative holding up for ya?