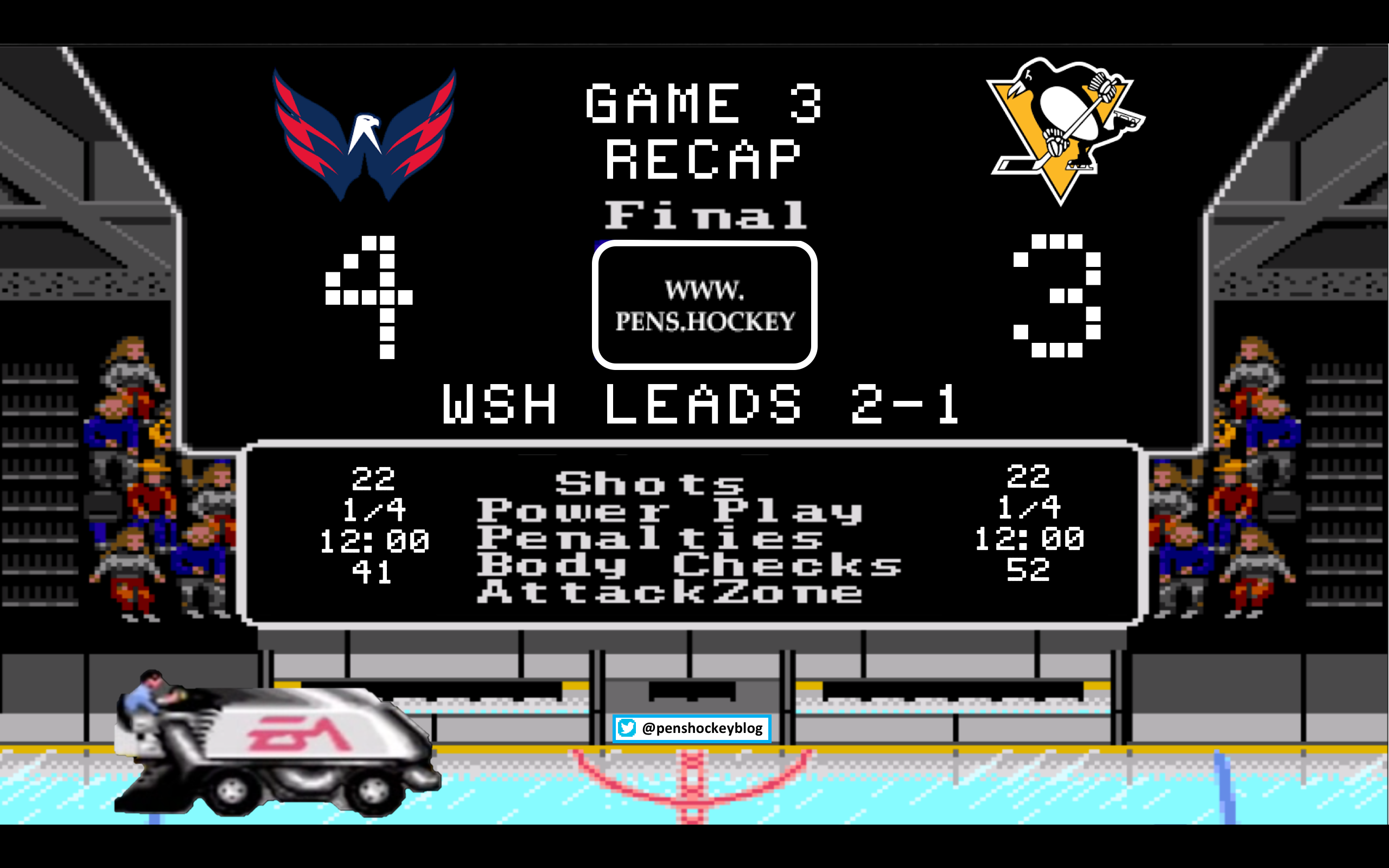 Game 3 in Pittsburgh with the series tied 1-1. Actually every series in this round was tied 1-1 after 2 as the league finally has a second round full of the teams that deserve to be there. Honestly all of these series are going to go 6 games and 3 of them have the possibility of going 7, this one included.

Carl Hagelin scores a SHG in his first game back, book it.

This isn’t possible Bob. I was told online that the series is over after a team goes up 3-1. #fakestat

Not only were Malkin and Dumoulin in the lineup but Sullivan also made changes to the bottom 6. Subtle changes they may be but they are changes some coaches wouldn’t make in a tied series. I’m not a fan of the Penguins Twitter gif and Brendan whines about too many tweets so the lines for Sullivan were:

The Penguins decided to open the game with the Geno line but more importantly they managed to make it through the first 3 minutes without giving up a goal. 3:56 into the game Brett Connolly was going off for tripping and the Pens full strength powerplay took the ice for the first time in the series. Malkin had a glorious look that would’ve brought the roof down but missed it high, ten second later Hornqvist was tripping down Orpik and the powerplay was over. Following about 80 seconds of 4v4 play the Caps had a brief powerplay but it wasn’t anything special.

5v5 play continued on as neither team really looked to hold an advantage as it was pretty even. After 3 minutes of even strength play TJ Oshie was called for holding and despite trying to win the ref over with his smile the call stood. The Penguins powerplay was everywhere with tons of looks but Holtby was able to see just enough of every puck as the Capitals killed their 24th consecutive powerplay in the playoffs.

5v5 once again resumed and this time we saw a subtle change that Sullivan made to the lineups start to make a difference. The Kuhnhackl-Brassard-Sheary line started to become noticeable in teh middle of the period, this is a big deal because individually these are not players you tend to recognize at 5v5 play. The line was possessing the puck and finishing checks everywhere as the team as a whole rallied behind their play and started tilting the ice a bit. That was going well until Kris Letangs stick broke at the point resulting in an Ovechkin breakaway, Murray made the save but Letang was called for interfering with Tom Wilson after the play.

The Capitals powerplay would get a full 2 minutes for the first time in the game and though they had some looks it was Bryan Rust and Riley Sheahan shining as they snuffed out puck after puck after puck. As the penalty concluded Tom Kuhnhackl entered the zone and dished a nice drop pass to Schultz who rang it off the pipe. 2 seconds later Malkin was tripping Niskanen and the Caps would go back on the powerplay with 1:10 remaining.

On this powerplay opportunity the Caps had some looks but it was the Pens penalty kill once again taking away the passing lane to Ovechkins spot forcing the defense to take shots from the point which were turned away by Murray. The period concluded with 50 seconds remaining on the powerplay.

Overall it was a good period for the Penguins especially after they started to tilt the ice as mentioned above. Holtby made some saves that he wasn’t sure he had to keep this game tied. Murray also had a little luck of the Irish with him.

The Capitals had the 50 seconds of carry over powerplay time mentioned above and they needed 48 seconds of that before this years offseason contract fuckup took a shot on goal that deflected off Rusts stick and by Murray.

Really nothing you can do but pray in a deflection situation, and if Murray is Jesus who does he pray to?

Jake Guentzel just continues to find ways to score and every single one is just as impressive. His toolbox is starting to look like it belongs in  Tim Allens workshop on Home Improvement. Please learn how to tattoo gifs and put this celebration on my back right now

Following the goal the Penguins turned it up a notch and the Capitals looked a little stunned, finally the Caps got possession in their own zone and tried a simple clear but Guentzel made a solid play to keep the puck onside then feeds Horny who is taken down by Orpik to draw a penalty. The Penguins powerplay has been a question mark so far in this series and the Capitals penalty kill has been getting all the credit despite the Pens getting plenty of shots on goal. The Pens started with their second unit and it was balls. Following a clear the first unit jumped on and eventually the puck came to Kessel in the corner. Phil slowly walks Carlson out of position and then drops the puck to where Carlson used to be right to the stick of Malkin. Geno walks in on goal and takes a shot in close that goes off of Holtby’s pad, and naturally Hornqvist was sitting in front where he banged the puck out of midair and into the cage.

The play by Kessel to bait Carlson out of position is such a good one, and then Malkin driving to the cage taking advantage of just 5 feet of open space.

With the lead the Penguins continued pushing and were still tilting the ice while the physicality ramped up on both ends. First it was Oleksiak trying to murder everyone. Then 10:09 into the period Zach Aston-Reese thanked the officials for not suspending Tom by running his head into Wilsons shoulder. Barry Trotz thought it was a clean hit so it must’ve been.

Head first, shoulder first, it doesn’t matter, this is still a text book charging penalty that wasn’t called. ZAR broke his jaw due to the impact, no word yet on if parallax anatomy played a role.

Once 5v5 play started after the refs met for 5 minutes to talk about their dinner plans the Penguins were not on the same page when Oleksiak couldn’t get a puck out of his zone. Oshie forced the turnover and Stephenson tied the game

Poor decision making by Oleksiak on a puck that should’ve been one of his easier clears of his life.

With the game tied once again we went back to 5v5 play and the Capitals goal seemed to calm down the emotions for half a second. After that half second all hell broke loose and when it was all said and done the Penguins got a 2 minute powerplay with both teams sending players to the box. The Pens powerplay was once again all over the place and nearly snuck one in before Matt Niskanen swept it out of the crease. The Pens couldn’t finish the job even though they were tasting blood.

Following the kill Kempny and Kuhnhackl decided to both try and get sneaky by drawing penalties and they both succeeded so we went to 4v4 once again. To start the 4v4 Brian Dumoulin dropped his shoulder and nearly snuck one in but Holtby denied him. The Caps couldn’t get the puck out because Dumoulin went right back to his spot and helped keep the puck in. The biscuit then went to Guentzels stick and this mother fucker gave Orlov PTSD with some nasty moves topping it off with a dish to Sid and he did not miss

So I was talking about the toolbox earlier, you can scratch that, Jake Guentzel is Home Depot at this point. This is a big time move on a gigantic stage and Guentzel has the confidence to pull it off and keep his wits about him to find Crosby. Pretty sure you can see Sidney thinking “so this is what it’s been like for my linemates all these years.”

Following the goal Guentzel took some liberties on Tom Wilson to the displeasure of nobody.

Some Caps fans were probably upset but Wilson’s parents probably cheered when this happened. Pierre McGuire on the call “I’m surprised this wasn’t a penalty” as NBC analyst try to out battle the refs for most inconsistent coverage.

Eventually the Penguins got trapped in their own zone and got sloppy with a change resulting in a too many men penalty with 1:02 remaining. The Pens PK kept the Caps against the boards and once again refused to allow Ovechkin to get the puck so Ovechkin had to start moving from his spot which meant the Capitals powerplay did not score before the period ended.

Pretty simple formula here, the Pens just wanted to shut the door. They were able to kill off the remainder of the Caps powerplay to start the period. Following the kill the third started off perfectly fine for the Penguins as they maintained offensive zone pressure and didn’t let the Capitals really get much going. 5 minutes into the period the Caps finally got some extended zone time and Matt Niskanen beats the toe of Murray to tie things up

This puck is most likely going wide but because Murray is challenging the shot he has to try to get it and ends up redirecting the puck with his pad. Of the goals this is the one that will eat at Murray the most.

With a tie game in the third both teams started exchanging chances but the game had an overtime feel for the next ten minutes. The Pens were getting plenty of looks in the offensive zone but couldn’t get the puck to the back of the net. With 5 minutes to go the Pens turned up the intensity and the Caps were holding on, it had that feel that the Pens were going to pull this thing out before overtime. In the last two minutes the Pens top line had an extended shift and threw multiple pucks on goal, they were winning puck battles and leaving the Caps pinned into their zone until a puck came to Olli Maatta at the point. Maatta sends a blind backhand into the middle of the offensive zone instead of throwing it back down the boards, the puck lands on Backstroms stick and results in a 2 on 1 with Backstrom and Ovechkin. This was approximately the 37th 2 on 1 Murray had to face, Backstrom showed good patience to wait out a sprawling Letang, and then found Ovechkin but Murray was there to make the initial save. The puck then went off the post and Ovechkin batted it in to take the air out of the building.

Tough seeing it after the Penguins had such a dominated shift. They would pull Murray but couldn’t get things tied up and that would do it.