After finally being able to put the shouldn’t have been controversial controversial White House visit behind them the Penguins got back to work last night in DC. To be up front I felt like the Capitals were going to come out firing on all cylinders. I mean how couldn’t they? This team has ended your season two years in a row, most recently a game seven shutout on your own ice. That sits with you all summer. NBCSN made a big deal about it pregame, interviewing Timothy Jimothy Oshie who agreed that they’re “more than ready to go” for this game. Yikes.

From the opening faceoff the biggest relief was seeing the jump in the Pens step, it told me that the Chicago game wasn’t only a flukey situation but that they have learned from it. The Penguins got a powerplay early on, and Patric Hornqvist was back in his spot in front of the net:

Huge moment for Letang personally, who gets his first goal since returning from neck surgery and rehab. Bryan Rust with his fifth assist of the year.

The rest of the period would go scoreless thanks to strong play by Murray but more importantly some complete shutdown defensive coverage that really pushed Washington to the outside. The shots would finish 9-7 Pittsburgh, and the Pens finished 3/19 in the faceoff dot.

The second period started just the same, and even though it’s early in the season you can tell the Penguins have that Sullivan Swagger about them. The system is on full display and it really exposed the Capitals limp D. On another powerplay chance it was the Swedish Nesqvist Chocolate Milk Shake we all love

Such a typical Hornqvist goal. 2nd powerplay goal of the game that comes from within 6 feet as the team experiments with the whole throwing it to the net and crashing the party powerplay strategy which seems to be a lot like your mom, sloppy but effective.

Matt Murray was doing Matt Murray things, and this is possibly the best tweet ever:

To be fair, Adam is a writer for a New York Rangers blog, so he knows all about what an elite goalie looks like. Regardless of this guys thoughts Murray was thwarting the Capitals party until a sloppy change in the final minute left a trailing man named Christian Djoos laid back with his mind on his money and his money on his mind wide open. If the Capitals don’t play on the Gin and Djoos thing then their social media team should be fired. Prior to the goal Murray had posted 105 minutes of shutout hockey.

The Penguins were on a powerplay to start the third period, and the PP stayed erect:

Such a great pass by Justin Schultz, to the door step, where 2 Penguins are within 5 feet of the goal. I’m just saying, this strategy works. 3 powerplay goals for the Pens, can’t get mad about that.

The Capitals did Capital things that looked a lot like Dan Bylsma era Penguin things. We are all too familiar with the drill: got outplayed so now we are going to empty the tank in the final 12 minutes so that everyone only remembers that part and says “well at least they tried hard.” Ovechkin would cash in at the 12:51 mark after Murray just barely misses a puck, his 8th of the season which is just insane.

The Capitals would keep pressuring with the goalie pulled but Murray wasn’t having it.

A common theme for the Penguins this year is that they are playing a game following a game the night before. The team has 19 back-to-backs this season, tonight marking their second. Even without 4 of the first 5 games being played in back-to-back scenarios, the Penguins have not had an easy schedule to start their season. Opening with two Western conference playoff teams, followed by the Stanley Cup runner-up, the Presidents trophy winners, and finishing with a team that a lot of people have picked to win the East this year. Escaping those 5 games with 5 points would be considered a success in my opinion based on the combination of it being the beginning of the season, a second short offseason, and the loss of 50% of the teams centers.

So now the Penguins are in Tampa taking on Steven Stamkos and the Lightning. I’m not sure how the Lightning are even still surviving after shipping off Mr. Work Ethic extraordinaire Jonathan Drouin to Montreal over the offseason. Tampa went 2-1-0 in the first week of the season and haven’t played since beating Washington 4-3 on October 9th. It’s no secret that the success of Tampa is heavily influenced by the health of Steven Stamkos. They also have the benefit of playing in the significantly weaker of the two divisions in the Eastern Conference. Other than the 2018 Stanley Cup Champion Toronto Maple Leafs the Lightning have limited competition for the top spot of the Atlantic. 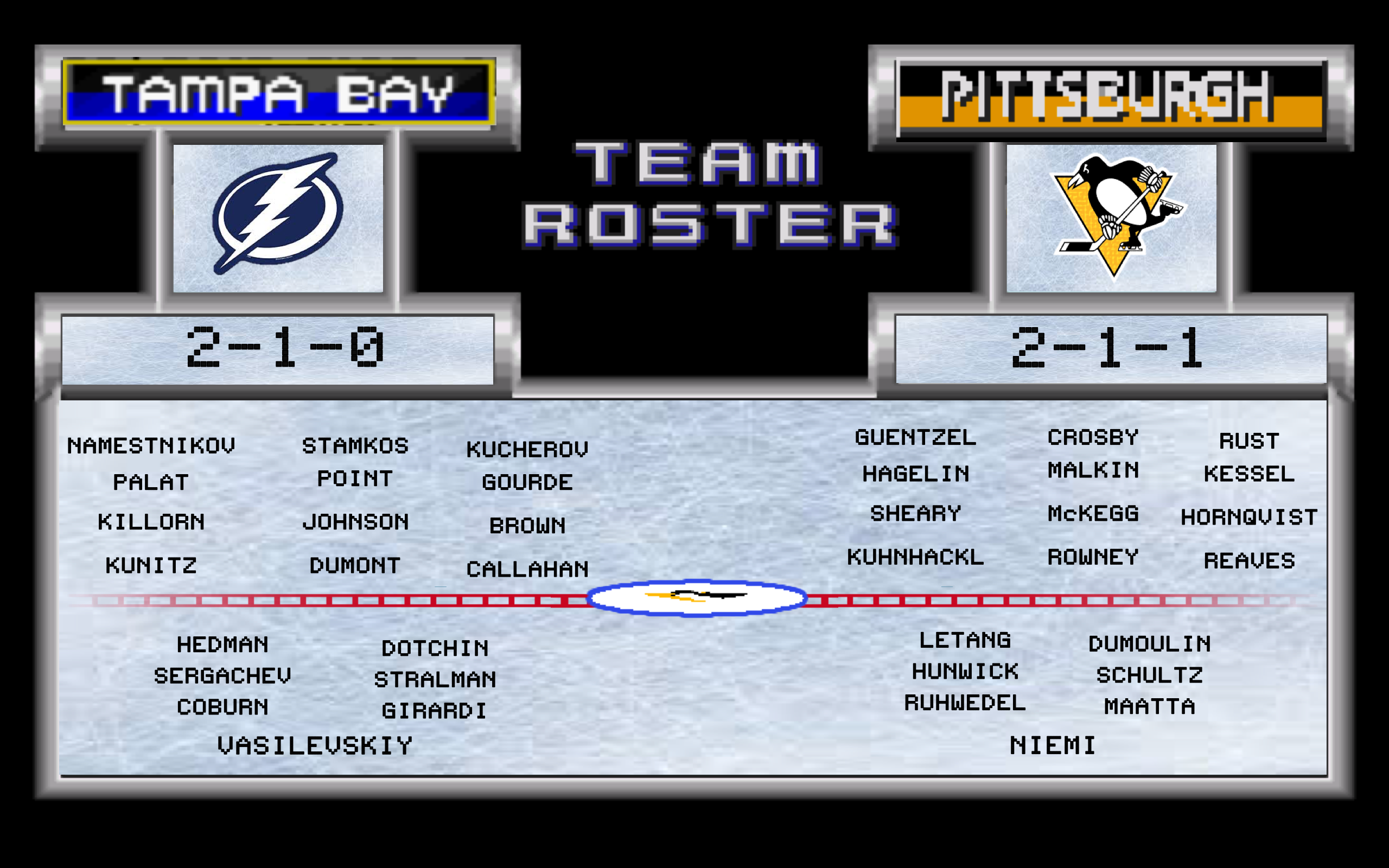 Despite the game yesterday I’m not sure Mike Sullivan makes too many changes. With the addition of Hornqvist he scratched Scott Wilson, who could potentially get back into the lineup if someone needs a rest. Ian Cole also travelled with the team to Tampa, but there is no indication that he will play over Ruhwedel tonight. The Antti Niemi Experience will be back in the crease so maybe you should go to the liquor store now. It’s a big game for Niemi, who coming from the Stars already had psychosocial problems and now probably has PTSD following his first outing as a Penguin.

On February 26th 2009 Ray Shero traded Ryan Whitney to the Anaheim Ducks for Chris Kunitz and killer winger prospect. Kunitz would continue on to help the Penguins win the cup in 2009. And again in 2015. And again in 2016. Though he was signed to a ridiculous deal that made him a whipping boy for his final years in Pittsburgh, you can’t fault the guy for signing a contract. Tonight marks the first time the Penguins will play against Kunitz after his 9 years with the Penguins came to a close this offseason. Thanks for the memories Chris, I’m sure you will be a pain in the ass, hit everything that moves, and finish every single check until I hate your guts tonight.

Going to take some getting used to…

The Penguins are coming off a rivalry game against Washington followed by a flight to Tampa. The Lightning have been off since Monday.  This game will be free on nhl.tv for those of you that don’t read the gameday info in the header.