It was a bit of a roller coaster for the Pittsburgh Penguins last week: the excitement of the championship ring and banner-raising ceremonies gave way to an entertaining 5-4 overtime loss against the St. Louis Blues wherein the Penguins rallied from being behind 4-2 more than halfway through the third period; then a dizzying 10-1 loss against the Chicago Blackhawks that left many grasping for words; and finally another chance to knock off their Stanley Cup Final opponents from Nashville as the Penguins found themselves again with a satisfying 4-0 win against the Predators.  At the end of it all, the standings read 1-1-1, 3 points for the Penguins here at the start of the regular season.

Those three points and all the points the Penguins obtain hereafter until the end of the regular season don’t matter so much on their own; it is how they are obtained that makes the difference.  That is: are the players working as a team, or as a collection of individuals trying to use their skills and talents on each one’s own? Sometimes, like after a blowout loss such as the game against Chicago (the Penguins’ most lopsided loss since 1990), a coach will rally his players together and remind them that they won’t make it far if they don’t work with each other, by themselves, without any regard for the situation.  An effort like the following game against Nashville suggests that perhaps this Penguins team was in need of such a reminder, that their past success should remain firmly in the past if they are going to continue on to future glory.

The Washington Capitals are in desperate need of such clarity.  For the third straight year, and for the second year in a row at the hands of the Penguins, the Capitals crapped out of the playoffs in the second round, another frustrating failure for the two-time defending Presidents’ Trophy winners.  Their window to win the Cup was arguably the most open it has been in the Alex Ovechkin era in Washington, buoyed supposedly by their rental acquisition of Kevin Shattenkirk at the trade deadline, but it was not to be despite the Capitals fighting back from being down 3-1 in the series only to lose at home in Game 7.  Shattenkirk left for Manhattan in the offseason, and other departures included Karl Alzner (Montreal), Nate Schmidt (Vegas), Justin Williams (Carolina), and Marcus Johansson (traded to New Jersey).  They added Devante Smith-Pelly.  They also extended Evgeny Kuznetsov, Andrei Burakovsky, Philipp Grubauer, Brett Connolly, Dmitry Orlov, and T.J. Oshie.  At present, their average roster age is roughly the same as it was when last season ended (28.3 years old vs. 28.4), but theirs is the tenth-oldest roster in the League.  Their window is closing.

The biggest problem for the Capitals is that, when the chips are down, theirs is not a unit that bands together well.  They revert to a mindset of “do what you can at all costs,” a mentality exhibited best by their captain, Ovechkin, who tends to spend his time flying around the ice either blasting pucks (seven goals in two games this season) or blasting opponents into the boards without consequence.  His singular talent is just that: a penchant for doing exactly what he is capable of getting away with regardless of his team or the consequences of his oblivious stubbornness.  He can score goals, sure, but can he backcheck when the Capitals are behind? I’m always reminded of this play, from the first of three consecutive seasons the Capitals have been tossed out of the playoffs in the second round:

2015, Game 7 in overtime, Alex Ovechkin said “fuck it” at the wrong time and the Capitals were eliminated.  Would we be disappointed if Sidney Crosby gave up on a series-deciding play like that? Absolutely.  The problem is that Sid wouldn’t give up at such a vital juncture in the game.  He’s usually the one with the puck on his stick, ready to make the play that will win the game, and if he’s not, he’s looking to win that puck at all costs.  Ovechkin doesn’t do that.  He’s still the Capitals’ captain, and may always be, in spite of his lack of situational awareness.

So for now The Great 8 has seven goals in three games, and it’s fun to think about that rate of 2.33 goals per game and how that would be 190 goals in a season if he kept up with that astronomical rate.  But he also has zero assists.  Of course the Capitals have won both games regardless, but at some point Washington will need Ovechkin to be more than just a single-minded offensive dynamo, or else the Capitals will continue to only get so far in the postseason. 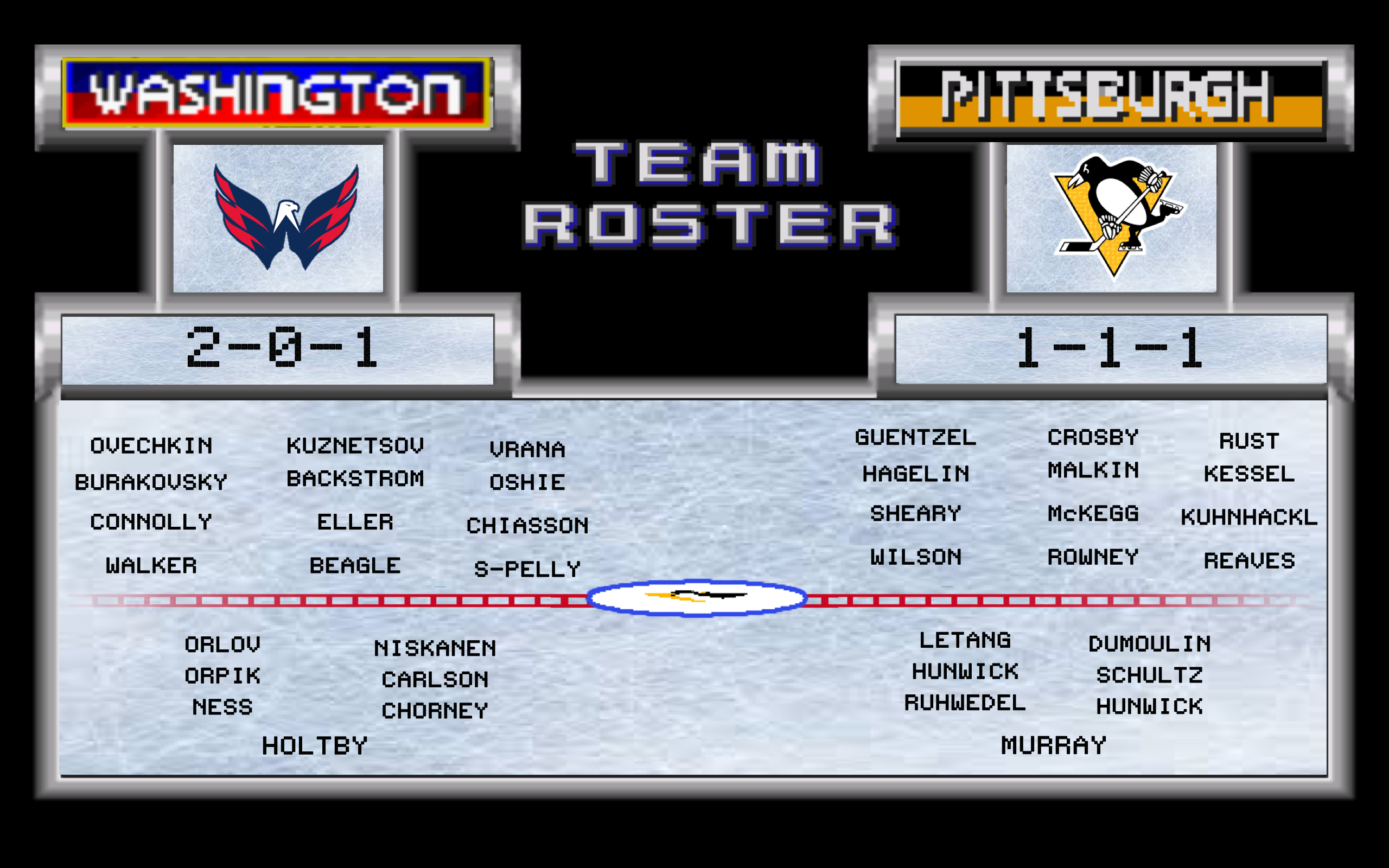 Due to the Pens going to the White House yesterday we don’t have any updates on Patric Hornqvist, who participated in his first full contact practice of the season on Monday. I’m hesitant to put him into the lineup so we will leave it with the same as it was for Nashville, though take note that Conor Sheary was switched out for Archibald during Mondays practice. No clue what Sheary did to piss of Sullivan. Chad Ruhwedel will play in place of Ian Coles jaw, and the Pens called up Chris Summers to eat nachos in case Ruhwedel can’t go or Maatta gets too drunk.

The key to the Capitals 2.5 game success has been scoring a lot of goals. That isn’t because they are super good this year, it’s because they have 4 NHL-caliber defenders and it is a must. Tonight will be a good test to see if the adjustments Sullivan made before the Nashville game were enough to get the defense in line or not. Big game for the Capitals, as they go out to win yet another regular season Stanley Cup against the Penguins. The Penguins have a fistful of diamonds and banners in the sky, the Capitals win president trophies, the Pens meet presidents.