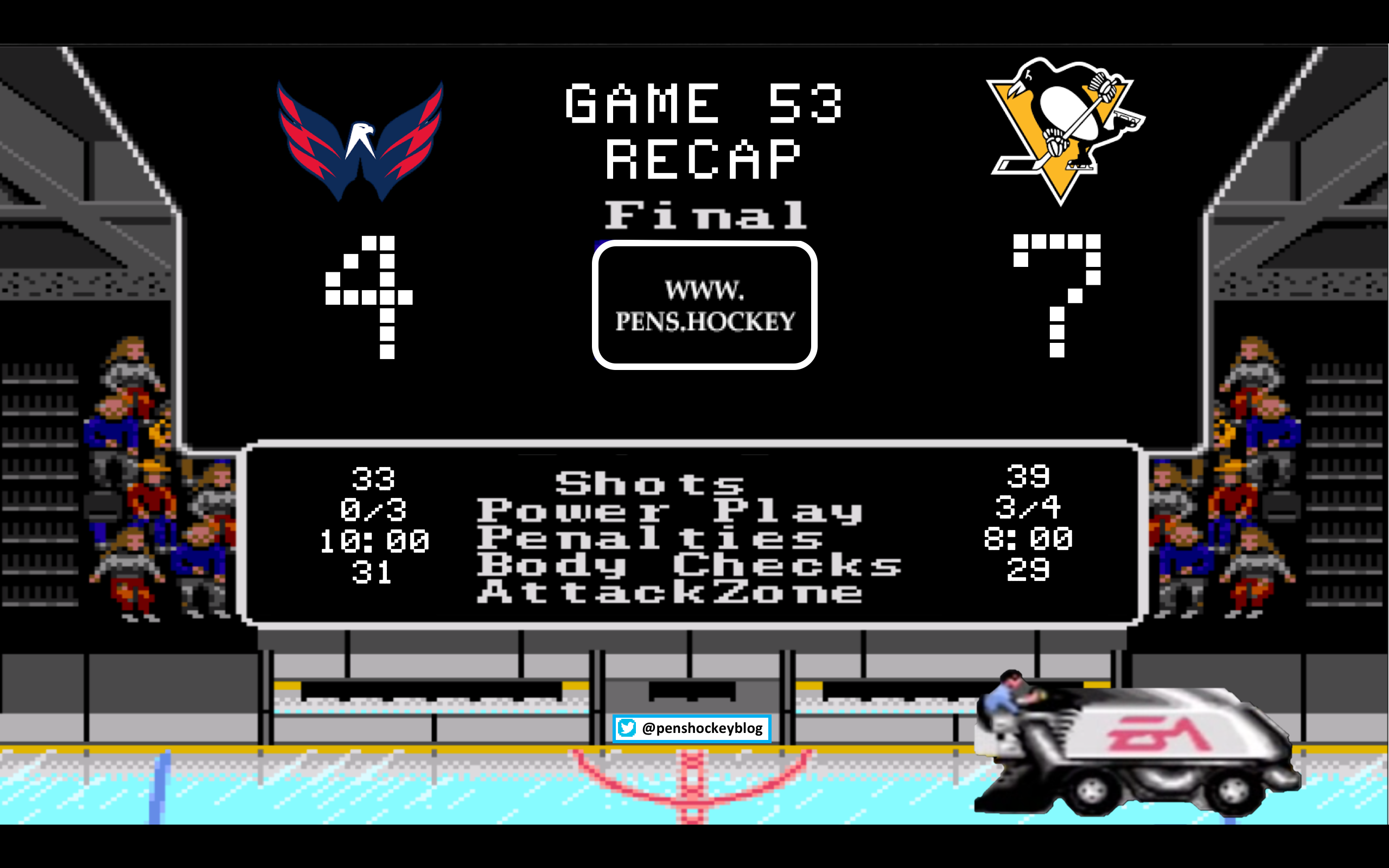 There is a lot to cover and only one post to do it, sorry folks but there will be no Treasure Grove today. The Penguins welcomed Carter Rowney back, and there were no other changes that weren’t mentioned in the gameday:

From the opening faceoff everyone could sense that these two teams were going to give it their all in this game. Both teams were transitioning and just going nuts and then the Pens got into their cycle game. It wasn’t long after that that the third line got out there and Riley Sheahan saw Phil’s shadow:

The fact Kessel scored is great and all, but I am here for that Sheahan pass. Just look at that pass, grab the tissues, and head to the bedroom for a minute. If the Penguins can somehow manage a trade that puts Sheahan’s talent on the fourth line it will probably be denied by the federal government. 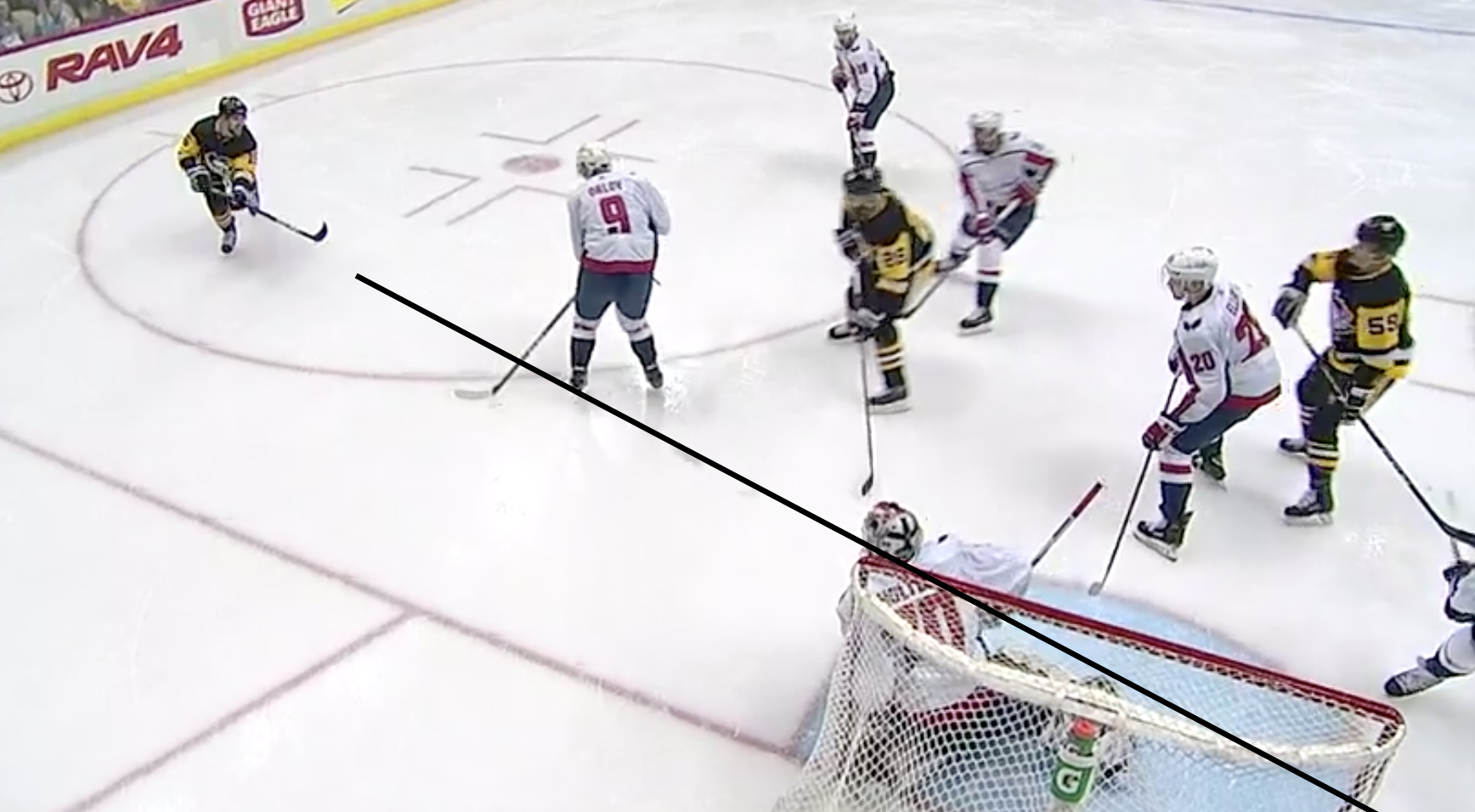 I mean DAMN SON. The puck went through Orlov’s legs, he had moved a little in this shot.

Following the goal both teams continued pressuring but it was the Penguins pesky forecheck that was agitating the Caps. Time and time again the Pens would rush their staggered forwards into the zone and time and time again the Caps would just air mail the puck to a Penguins defender. Eventually Washington decided enough was enough, took out the middle man and gave Carl Hagelin a cookie for all his hard work.

When the Penguins are playing their best their forecheck is causing problems. This isn’t one bad individual play by the Caps, it is the culmination of having to work every single shift all period long just to get the puck to the offensive zone. The Capitals would eventually get on the board when Ov8 made a nice power move to get to the goal, Murray saved the initial shot but the rebound bounced off of Dumoulin’s skate and into the net.

Not the greatest effort by Letang but honestly easier said than done in that situation. The goal took the air out of the arena but the Pens would hang on the final 110 seconds to take a lead into the locker room.

You wanna talk about intensity? 25 combined shots in the period.

The Pens took about 1:30ish of carry over powerplay time into the second period. They needed just 26 seconds to get set up in the zone and put on a clinic.

This gif may be one of the best of the Penguins powerplay. Crosby starts up top in the crease which takes one defender out, but also keeps the Washington box tight in the middle. As soon as Sid breaks down to get the puck from Malkin, the defenders have already adjusted to two passes and Hornqvist is wide open. I could watch this gif all day. Holtby complained about being touched by a Penguin like 20 seconds before this puck went into the net, a couple of playoff chokes and the dude already thinks he’s Lundqvist. The Pens PR team is on fire recently:

Was Holtby celebrating too? Hmm… 🤔 pic.twitter.com/qCT71kcwNm

The Capitals would answer back relatively quickly when Dmitry Orlov once again shows us that Russians are better at shooting than defending.

This gif may be sped up jussssstttt  a bit. Ian Cole with a solid screen for the Caps: 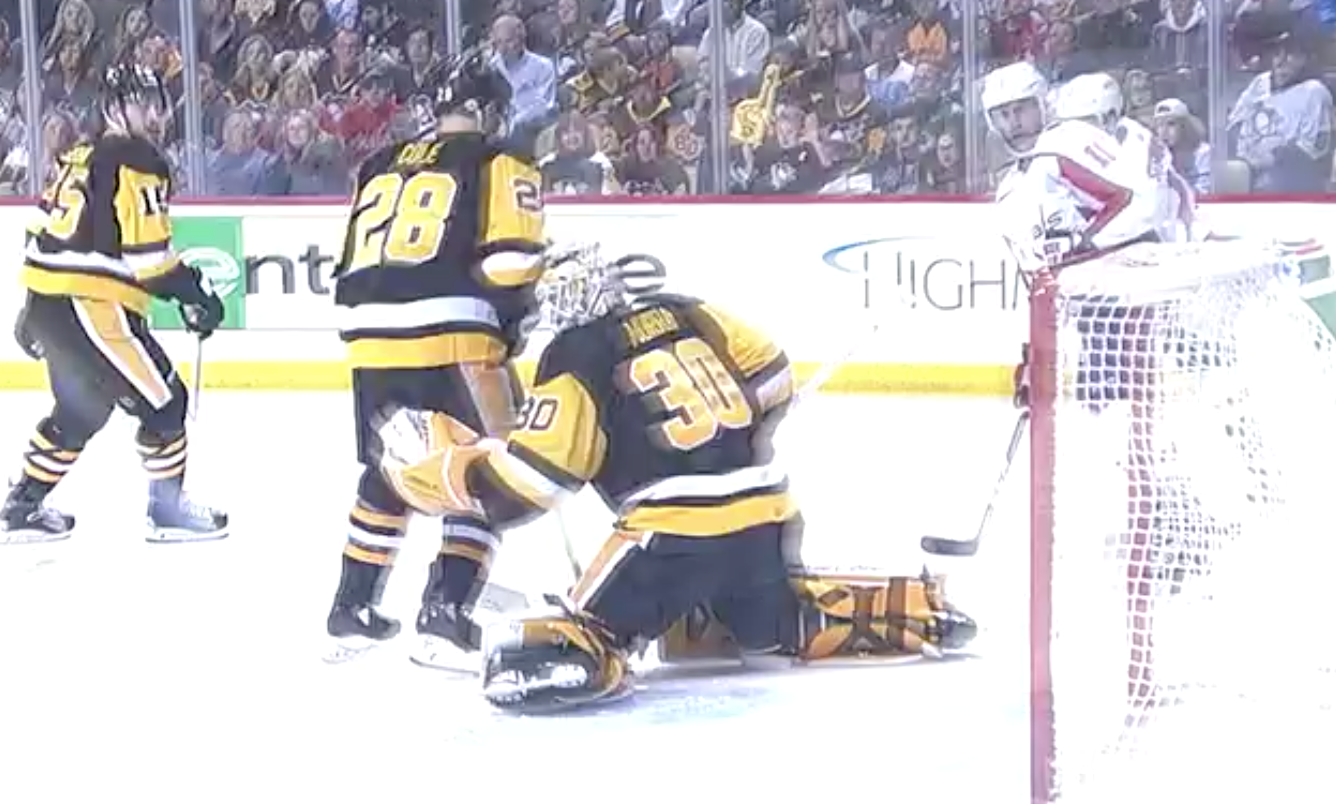 The Capitals got momentum following the goal and even though both teams were getting chances the ice seemed to be tilting. 8 minutes after the Orlov goal Kuznetsov ties the game up on a questionable no hand-pass call.

The puck touched Malkin’s stick and that is where the gray area comes in to play. I included the rules below so we can discuss amongst ourselves, my only question is if this was a puck played with a high stick and it bounces off Malkin would it have been blown dead? I’m not so sure in this league. Regardless, Tom Wilson drinks his own pee. 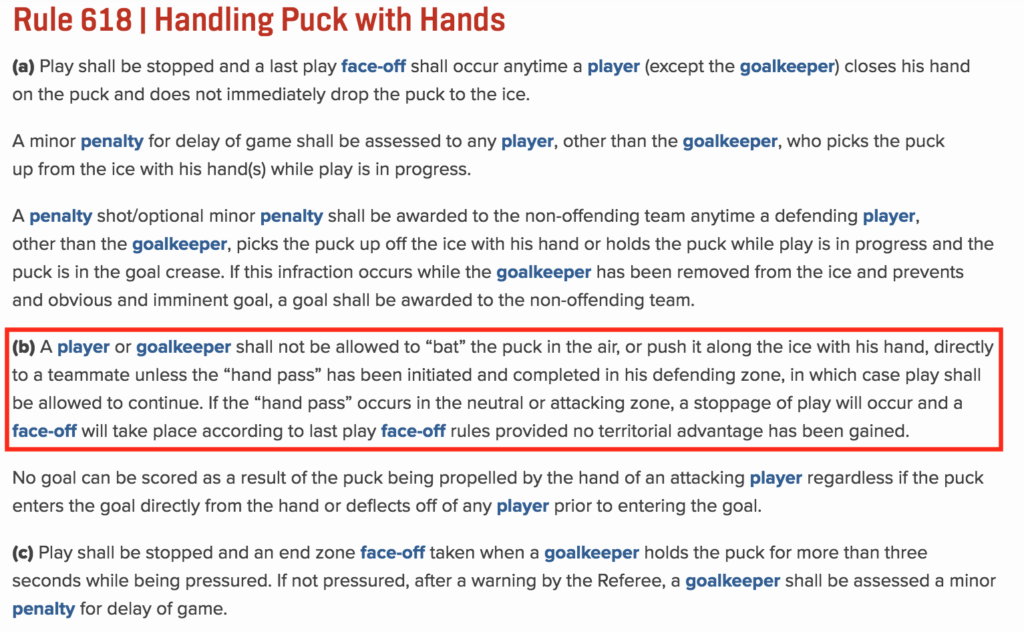 TJ Oshie and Kris Letang go at each other in the final minute in a sequence that ended with Oshie cross checking Letang to the neck. Oshie has this uncanny ability of making top 6 money yet being completely forgotten about until your team plays him. He sucks. He’s always sucked. He was selected over Phil Kessel for team USA in the World Cup lololololol.

Here’s a look at your #WSHvsPIT numbers through the 2nd period. pic.twitter.com/hWY3Rq6DEc

Tie game between two rivals in a tight division race, what more could you want? Well for starters, I would want this game on NATIONAL TELEVISION YOU FUCKING IDIOTS. It is Super Bowl weekend, all of America is thinking about sports, don’t try to sip from the overflow or anything. The league did televise the Vegas/Minnesota game which I understand considering the Super Bowl is being played in Minnesota but come on, not having two hockey games on last night is why the ratings suck.

By the time I was done bitching about that Evgeni Malkin was still reminding everyone that he is absolutely insane right now:

Huge rebound for Holtby to give up though to be fair the puck did hit him while he was making the save so it could technically be puck interference. Malkin just thirsty AF right now chasing down that rebound. 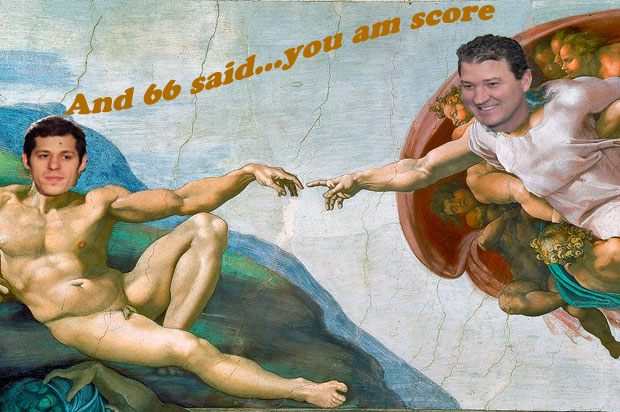 The good vibes would last as long as you usually do in bed as the Capitals would tie the game again 49 seconds later when Ovechkin was all alone.

I’m not sure why the Capitals twitter doesn’t use gifs but it is annoying. Just like Crosby and Malkin, you can’t leave Ovechkin wide open like that and you know who is catching the blame for this one…

Oh Letang. The Pens were in the middle of a defensive change so they had Letang, Dumoulin and Oleksiak all out at the same time. On zone entry Dumoulin as usual has perfect gap control on Kuznetsov, Oleksiak looks like he knows what he is doing, Letang may be seeing double: 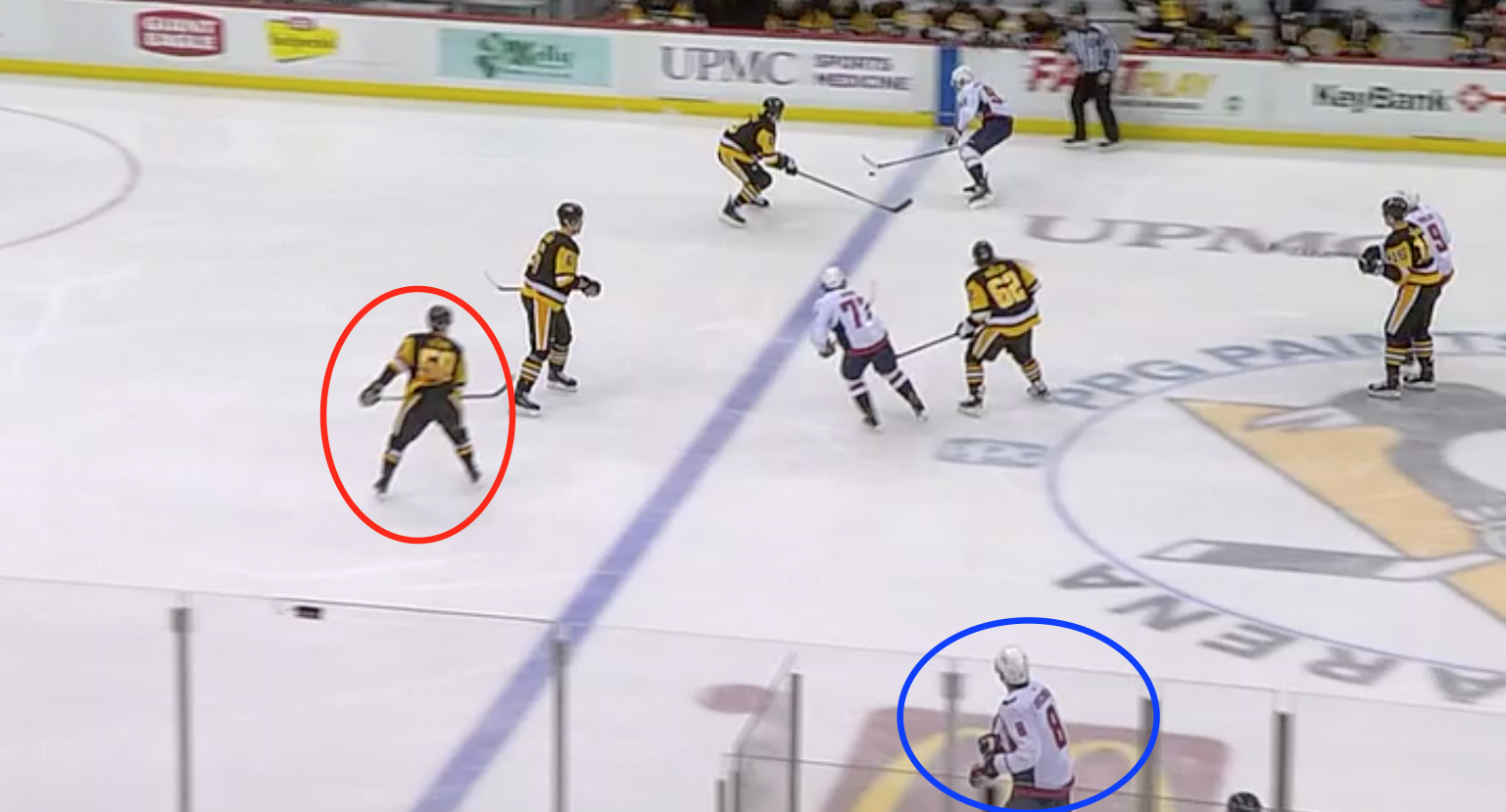 As Kuznetsov continues down the wall Dumoulin perfectly contains him while Oleksiak takes Oshie and the center of the ice away. The issue is suddenly Letang jumps to his right to also take Oshie, which I’m sure had absolutely nothing to do with the scrum between the two of them in the second period…

After Dumoulin forces Kuznetsov to pivot Letang miraculously ends up in a perfect passing lane defending position which was a result of luck rather than planning. Letang doesn’t defend the passing lane, and the Capitals tie the game. Sad trombone. 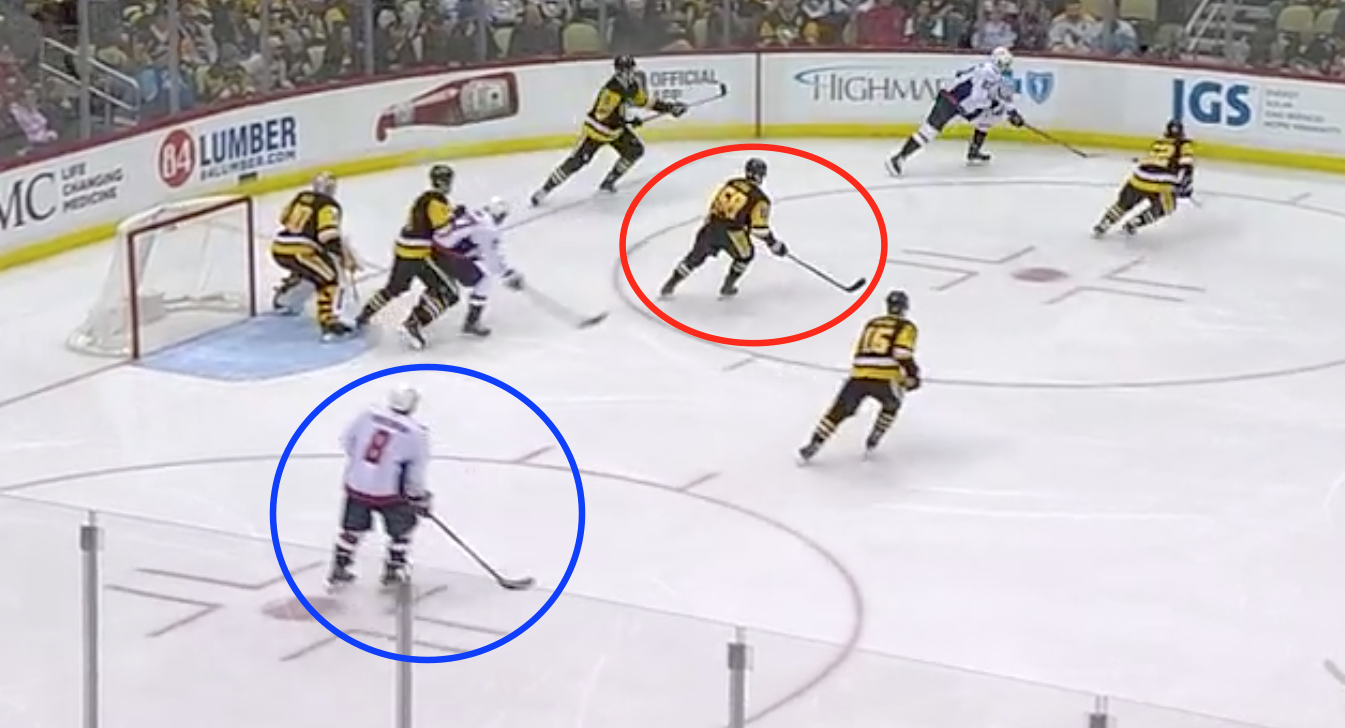 The game was just insane following this goal and shame on you if you missed it, I still love you though, loser. Eventually the Capitals would take a high sticking penalty in the offensive zone to put the Pens powerplay to work. Patric Hornqvist went out after a collision with Orpik earlier in the game and never returned, so the team was looking for someone to fill his spot, enter the teams handy man:

That is just old fashioned elbow grease right there sonny. Grit and determination by Rust. Please don’t trade Rust. Less than two minutes later the only Phil that matters in Pennsylvania had the puck along the boards, and good night Irene:

I mean come on man, what a freaking shot by Phil.  I don’t have any words for Phil anymore. I am borderline obsessed with the man. One day I may just show up at his house with a please adopt me sign at this point. The hero Toronto needed but didn’t try to understand, Phil Kessel, bless you.

For some reason Barry Trotz decided he would pull Holtby at this point. Sure there was time left in the period and maybe he felt the team would rally but I don’t agree with the call. Pulling a broken goalie with a two goal deficit in a shootout style game isn’t the best thing for his psyche, but I suppose we can add Holtby right next to Lundqvist in Mario’s portfolio. The decision by Trotzella paid off when the Capitals took their fourth penalty of the game and the Penguins whipped their PP across Grubauers face:

Thanks Orpik. Three for four on the powerplay in this game, talk about the stars showing up. Heading into the 5 minute left commercial break Bob Errey went on some kind of rant about the Pens needing to finish the game strong and “get the deuce.” I am proud to say that I will be adopting the phrase into my recaps from now on. The Capitals confused the remaining ten minutes with the second round of the playoffs and didn’t have an answer. Time ticked down. These Penguins are hot, baby. 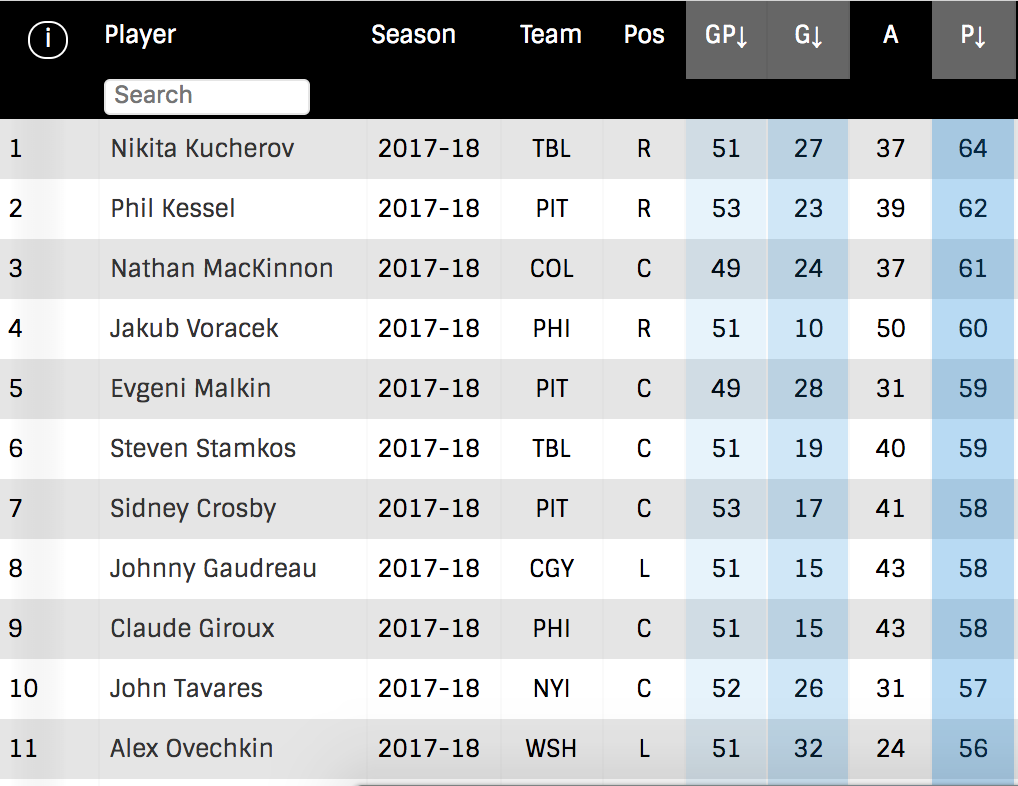 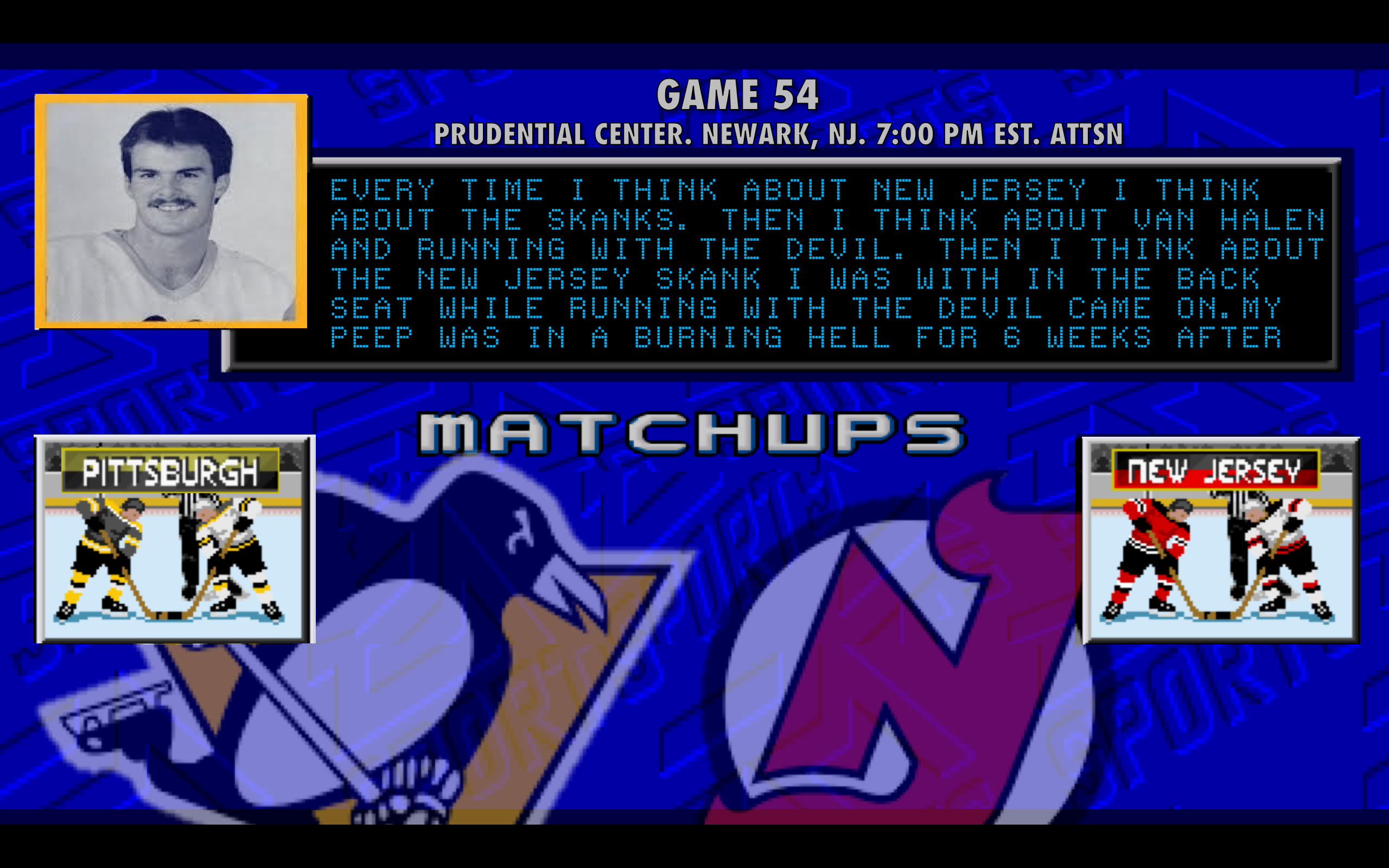 Now the Penguins fly to New Jersey to take on the high flying Devils at the rock. I’ve actually watched a good bit of the Devils this season and their style of play is sooooooo much better than what we generally associate the Devils with. Following last nights win the Penguins have a huge opportunity tonight to put some space between them and the Devils, but you know New Jersey has been waiting for this game since their Thursday night tilt with the Flyers concluded. Current implications: 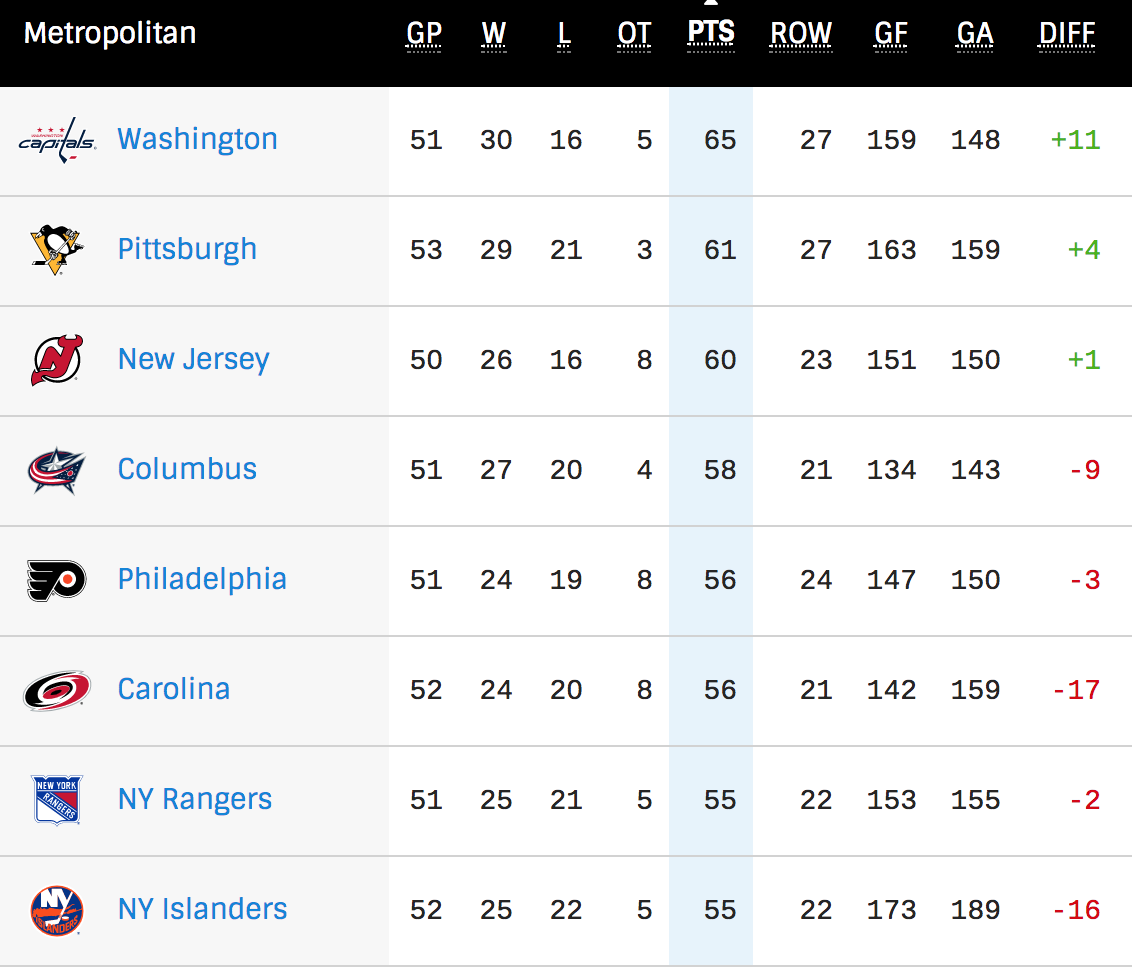 The Devils are 14-8-3 at home while the Penguins are just 10-14-2 on the road. The games in hand thought is always there, but if the Penguins can pull out a dominant victory tonight it will put those worries to rest and continue to spike fear into the rest of the league. One thing the Devils have been very good at is the penalty kill, oddly enough they have the exact same kill rate as the Penguins when rounded to the 10th decimal position at 82.5%. Since I’m on a roll with Micah’s hockeyviz.com charts here is a look at the New Jersey PK shot chart: 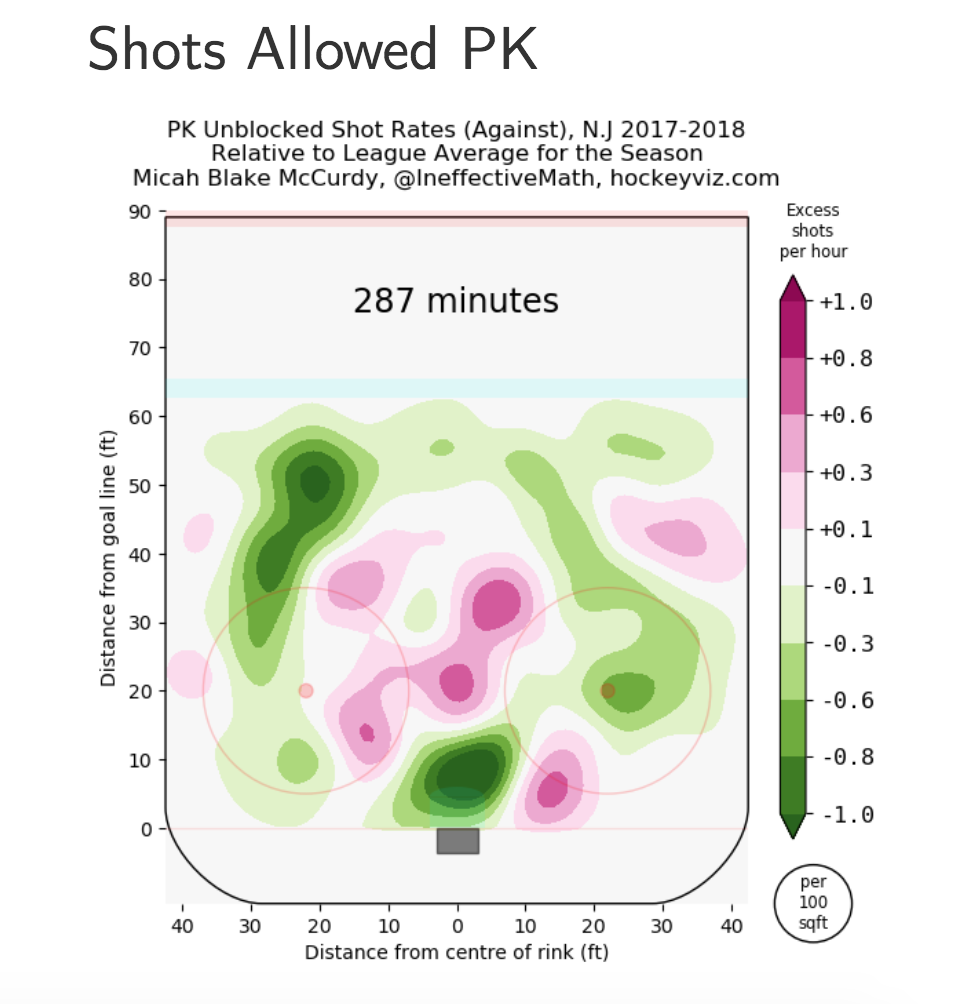 You can see by the lack of darker pink areas that the Devils do a very good job limiting any “hot spots” for the opposing teams powerplay. In case you are curious, and I know you are, here is the Penguins PK shot chart: 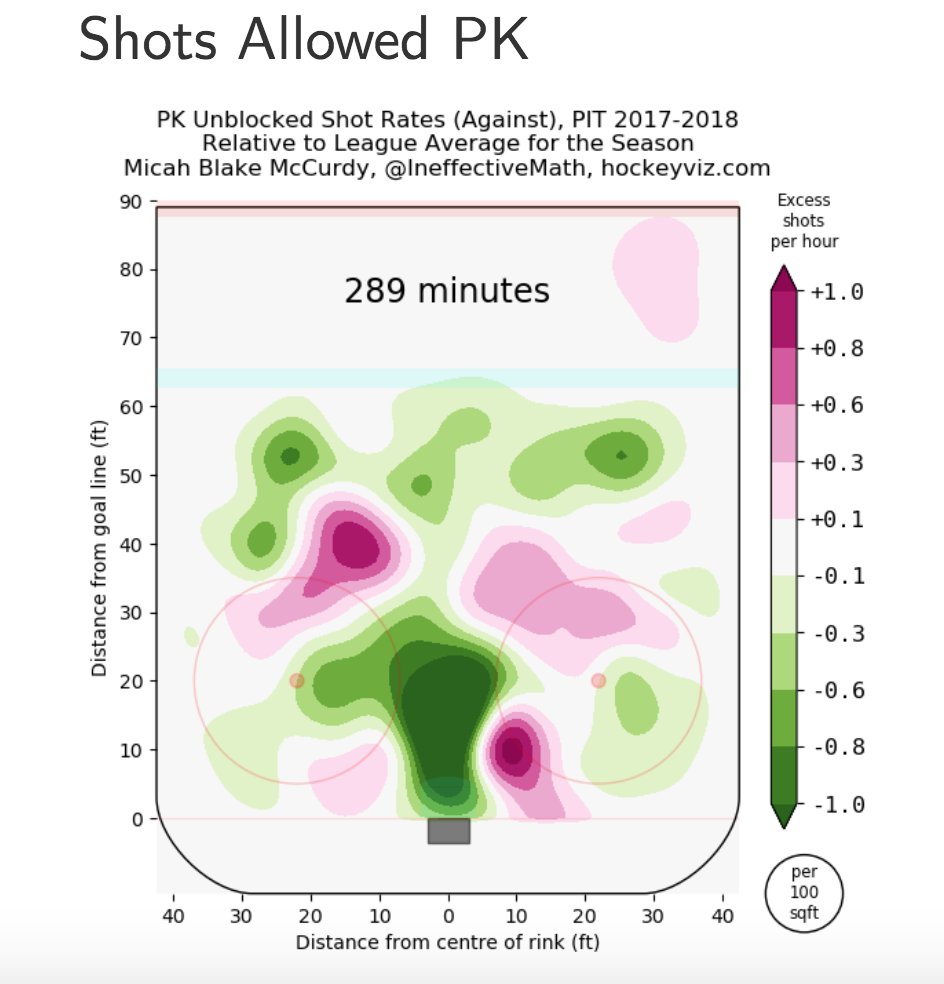 Talk about shutting down the center of the ice. It wouldn’t be very surprising to go through all of the teams with kill rates above 80% and see the center of the ice look like this. The Pens PK will be tested tonight as the Devils powerplay is nothing to discredit, currently ranked 10th in the league clicking just above a 1 for 5 rate of 20.8%. 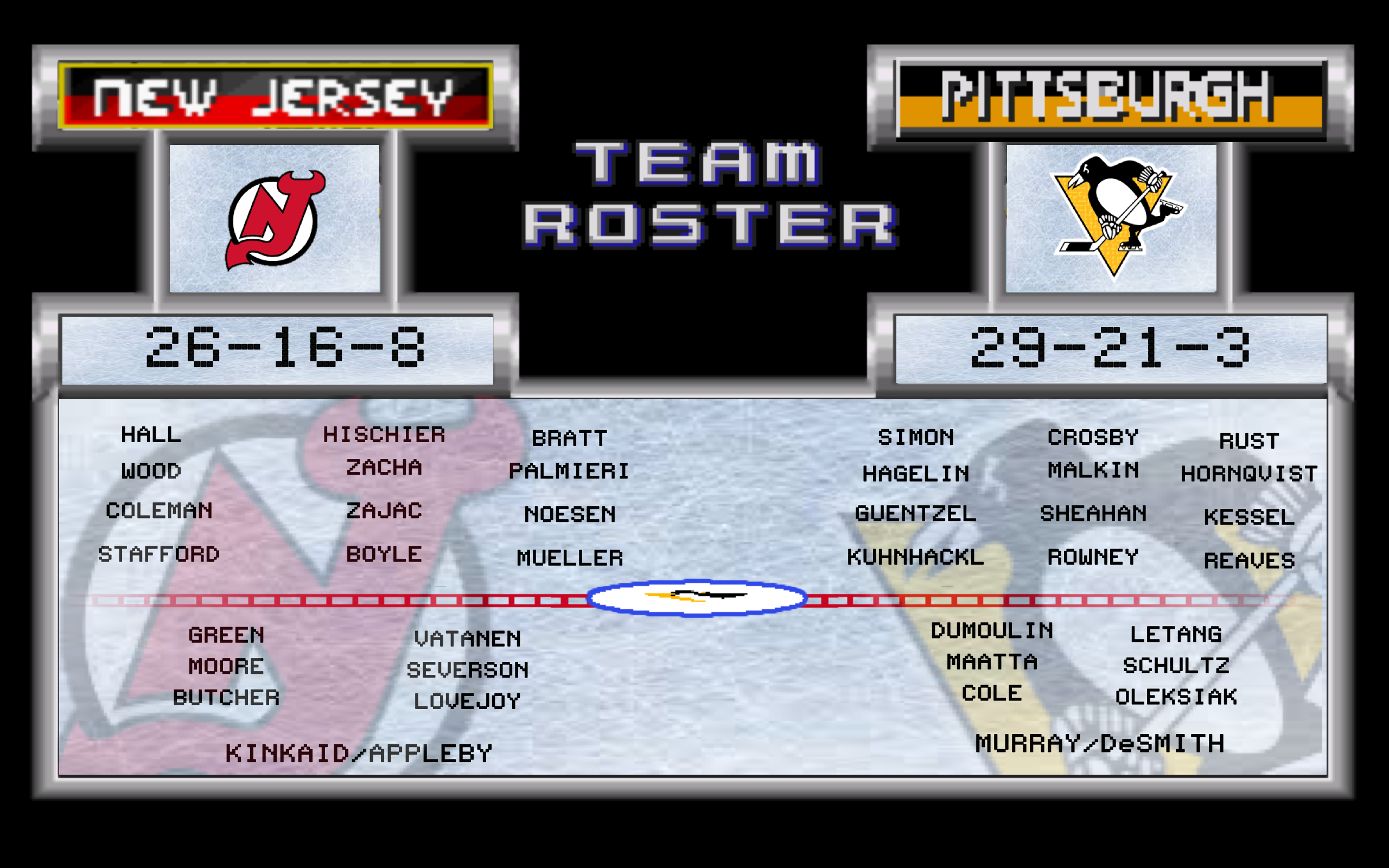 After giving up 4 against the Capitals I don’t know if Sullivan turns to Murray again, not that those 4 were his fault or anything, but DeSmith has earned Sullivan’s trust. Part of the Devils success this year is the use of a style the Penguins developed, the four line model built on speed. Sullivan used his fourth line for just under 10 minutes last night with the return of Rowney which will help them balance the Devils fourth line. This should be a really good matchup by two good teams and if I was Sullivan I would be trying to get Malkin’s line out against the Butcher Lovejoy pairing as much as possible. The Pens are rolling brother, they are hot brother, and they are going for another deuce brother, let’s go!