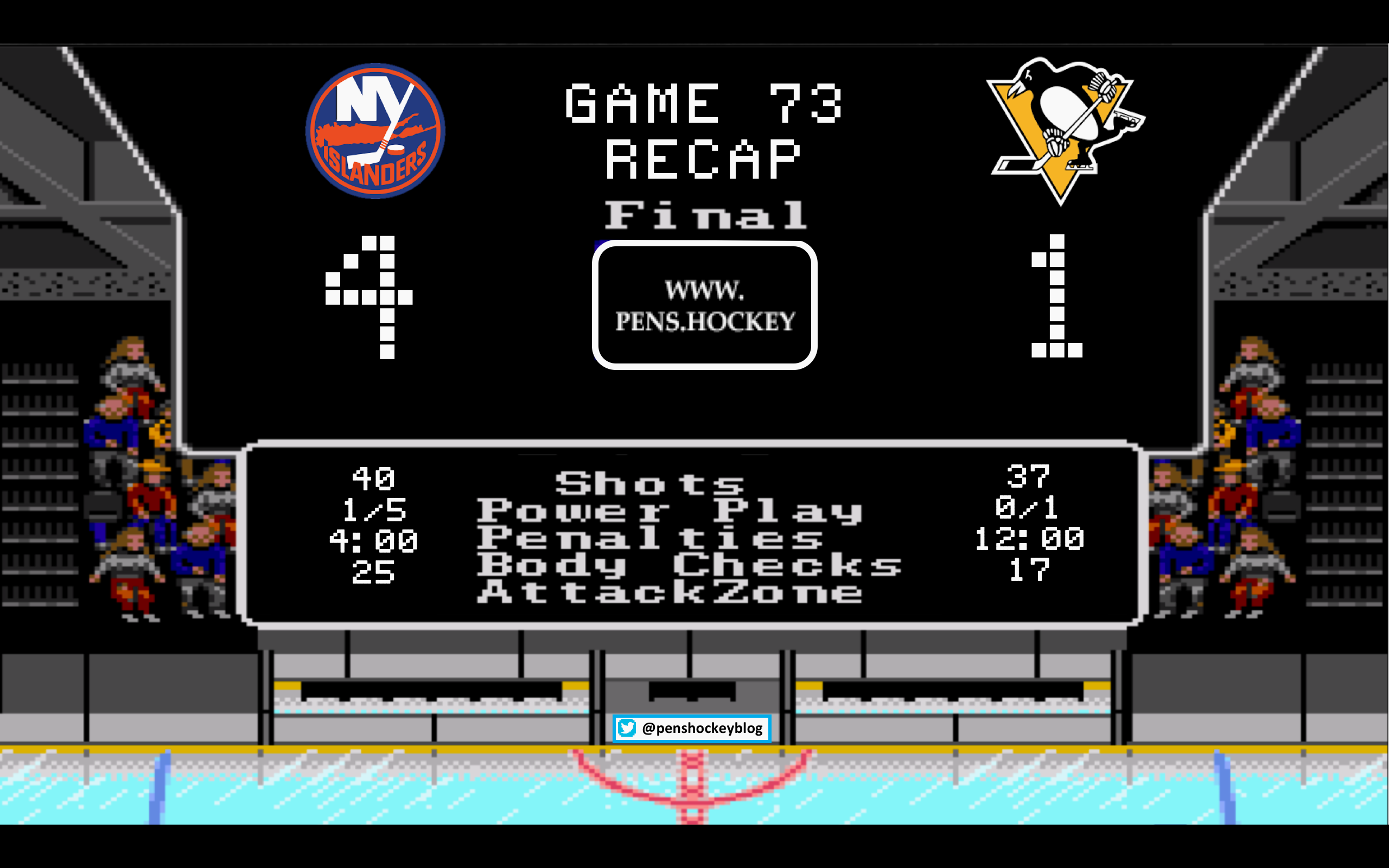 The Penguins played last night as if they were coming off of a 4 day break and had to get geared up to play the Islanders. It was equivalent to coming back from a three day weekend just to find out you had to go to a 2 hour sexual harassment presentation at 8 am Monday.

The biggest news heading into the game was the return of Matt Murray to the front of the net.

From the opening faceoff it was clear the Penguins didn’t have the jump. It took 5 minutes for the Islanders to start getting the puck, and bodies, to the net and the Pens were quickly down 1-0 on Barzal’s 20th of his rookie season. No chance for Murray on the goal as it was deflected less than 5 feet in front of him.

The Pens responded with some decent shifts but they were having difficulty navigating through the Islanders pressure and Chris Gibson is a backup goaltender. 5 minutes after the first goal the Islanders were on the board again after Pelech fired a slapshot right by Murray.

Letang doesn’t have a lot of breakout options here on the overhead view. But once he turns it over, he can’t watch the rest of the play develop. Upon further review, that’s the real error here. Gotta engage. Middle of the ice is wide open because forwards had to come assist. pic.twitter.com/c5cnjiqj8F

The Islanders got a powerplay chance when Oleksiak was called for interference but the killers managed to kill it off and the period would end 2-0.

Here’s a look at your #PITvsNYI stats after the 1st period of play. pic.twitter.com/9ZlvUXaOT6

The second period was all about a game known as “what the hell was that call?” In the first 5 minutes the puck was waved dead when Hornqvist was called for playing it with a high stick, which he reacted to the call by slamming his stick down and got hit with an unsportsmanlike penalty. Bad on Hornqvist for reacting that way, bad on the refs for calling a stick at the elbow level high. The Penguins were having some issues killing the penalty and Brian Dumoulin put the stick into Tavares along the boards that was good enough for a cross-checking penalty. I’m not saying it wasn’t a cross-check, but with 3 powerplays to 0 already there is no way that gets called int he playoffs. Matt Murray made some pretty big saves during the kill and the period, this may have been the highlight

The Penguins finally got their first powerpay chance 9:45 into the period when the penalty killers created a 2 on 1 that Kuhnhackl was hooked up during. The Penguins would not capitalize on what would be their only powerplay of the game.

With the period winding down the annoying person beside me mentioned something about Gibson getting a shutout and I was so happy. One minute later Phil Kessel was circling behind the net and casually finds Sheary on the other side

Zero hesitation on @csheary13‘s 15th goal of the season. pic.twitter.com/smujvLMtk4

This is a great rotation by this line, as soon as Kessel takes the puck Sheary knows to continue in the opposite direction. In the gif below when they zoom in on Phil you can see his eyes track across the entire offensive zone quickly to figure out all of his options. It is an excellent example of how quickly he thinks the game:

Kessel passes to Sheary, who isn’t even in a position to shoot yet, while staring at the net the entire time. No big deal. pic.twitter.com/aGX0srBYWB

For the majority of the game this combination wasn’t working and we even saw Kessel with Malkin at times, but this is yet another game where the team needed a goal and the third line got it done. 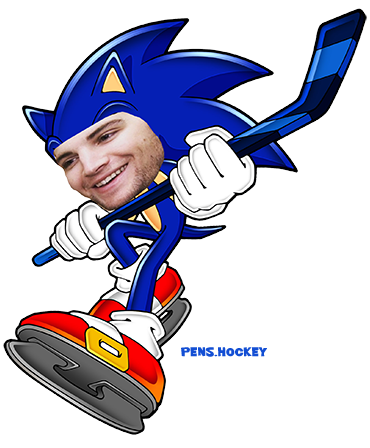 Neither team would score in the final 2 minutes of the period.

Two orange. Two yellow. Not too much time left to go. #LetsGoPens pic.twitter.com/chgTqGAbq3

With the team only down 1 there was that sense of a comeback happening. 4 minutes into the period Malkin lost his footing and ends up taking a penalty that didn’t sit well with a lot of Facebook fans. After review Geno was in the process of spinning when he lost his edge, making it both impossible to stop his motion and look like a lazy penalty at the same time. The Islanders got to work on their 5th powerplay of the game and Anders Less put his team up 3-1.

ANDERS LEE FINISHES IN TIGHT ON THE BACKHAND! 3-1! pic.twitter.com/bmi97QC5M9

Of the 3 goals this is the one Murray will want back, though a backhander in close like that is nearly impossible to judge.

The Penguins just couldn’t get anything going in the final frame and the even up calls never came. The Pens pulled Murray with 3 minutes left and the Islanders quickly made it 4-1 as the Penguins couldn’t get out of their own zone with the extra attacker. 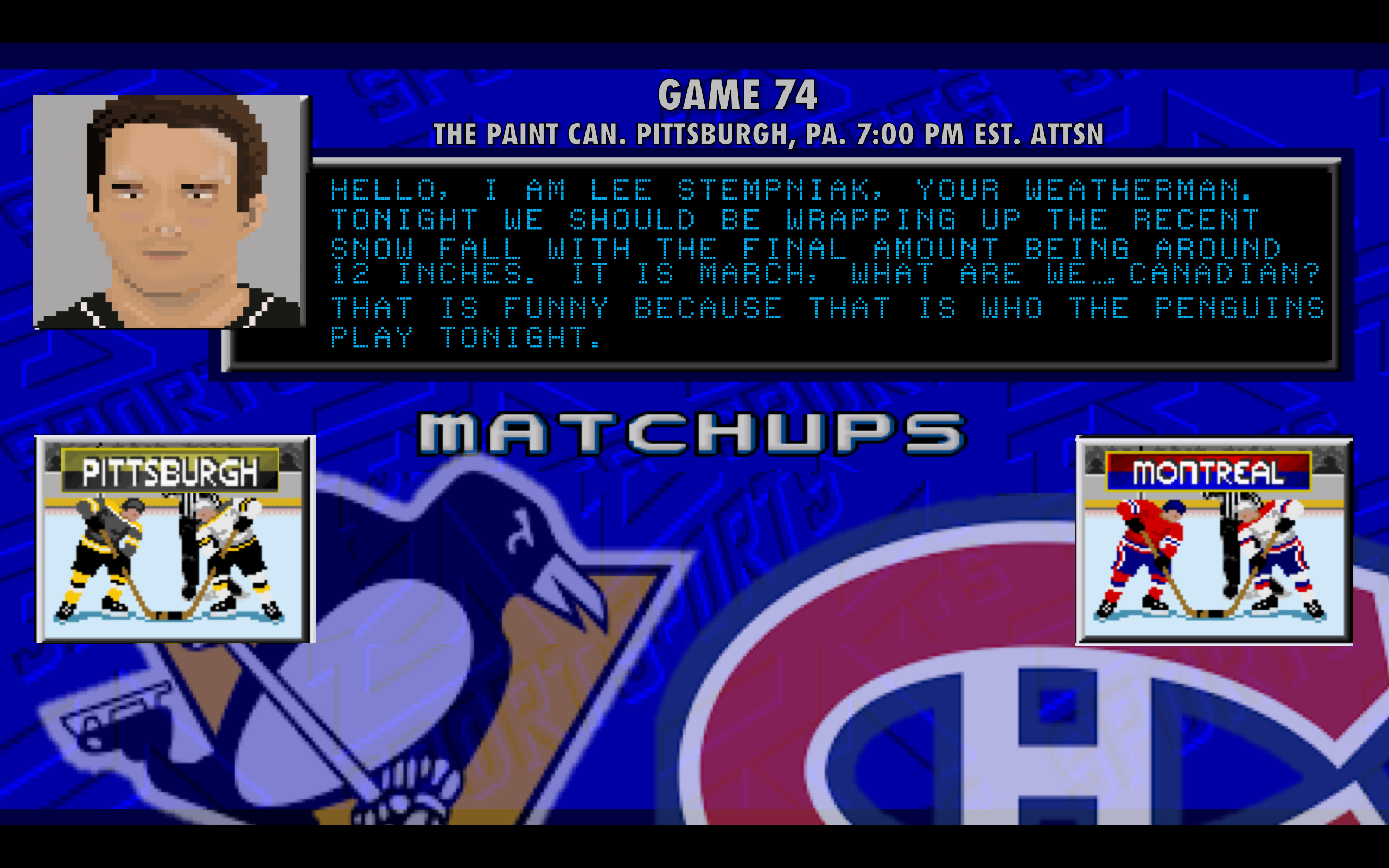 The Penguins now go from Brooklyn back to Pittsburgh to get ready to play yet another team that will not be dancing in the postseason. Tonight is all about Sullivan having enough control over this group of players to have them ready to go tonight as dropping back-to-back games to middle of the pack teams is not a good look 2 weeks before the playoffs. Following the loss last night and the Blue Jackets inability to lose since acquiring Cole (that’s a joke) the Penguins have suddenly lost their 4 point lead for second in the division: 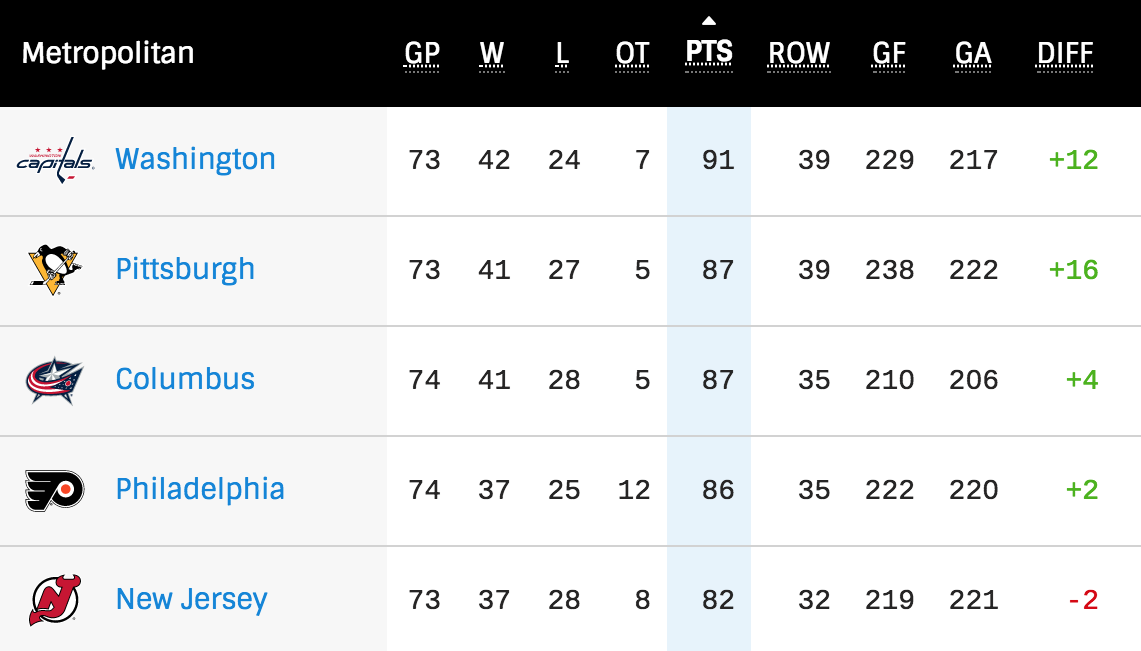 If you are the type that freaks out after every game based on the standings the next 9 games might not be for you. If you’re a fan of watching the game while simultaneously checking your phone and having another game streaming on your computer then the next 9 games are just for you. The Pens still have 2 games against the Devils and 1 against each of the other 3 playoff bound Metro teams coming up making me captain obvious when I say that they don’t want to leave opportunities like tonight without points. Maybe they should try the Philly method of losing every game in overtime to get some extra points?

The Penguins could get into the playoff spirit tonight considering a win will eliminate Montreal from playoff contention. The Canadiens have once again failed to execute for their city but their fans will remind you that they have like 100 cups from when there were 2 teams in the league. It’s cute and all but 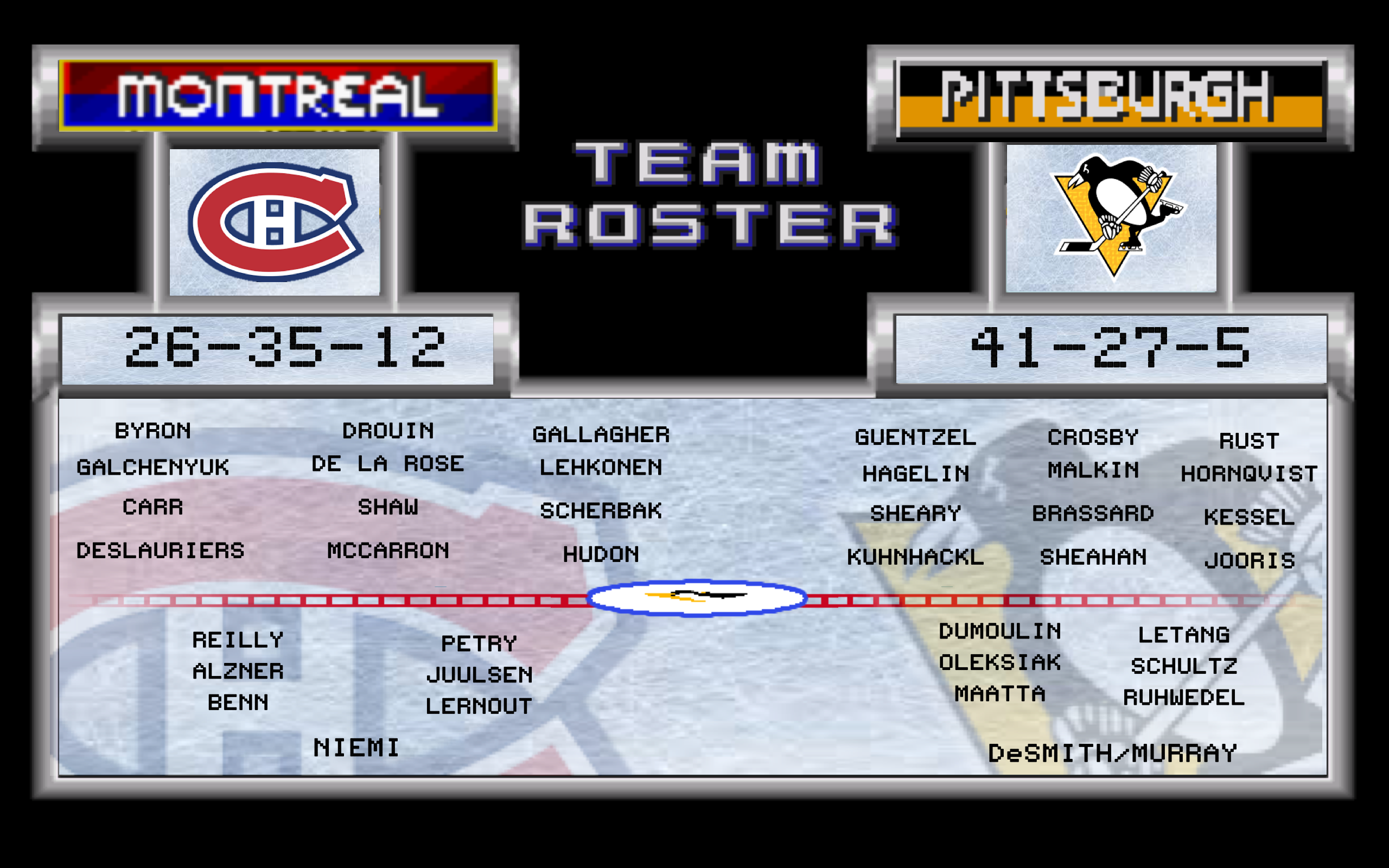 I wouldn’t expect any changes to the Penguins lineup tonight except for DeSmith in net. I would expect to see a good amount of line shuffling by Sullivan as he is still looking for the perfect combinations heading into the playoffs. After being shutdown for most of the night in the neutral zone last night I feel like a big focus of tonight will be on the breakout as the team will try to get back to their game and attack plan.

Losing last night was predictable when you consider the Penguins are historically awful when they have more than 2 days rest. The way the team responds tonight will be the most important factor going forward into this final stretch of games. Now is hopefully when the Pens will start to simplify their game, make the short successful passes through the neutral zone instead of the elaborate 100 foot prayers that we see when they feel pressured. The rest of the Metro (those that matter at least) are off tonight meaning everyone except the Caps will have 74 games played by the end of the night, the Penguins have a chance to get a full game ahead of Columbus with a win, now they just have to execute.