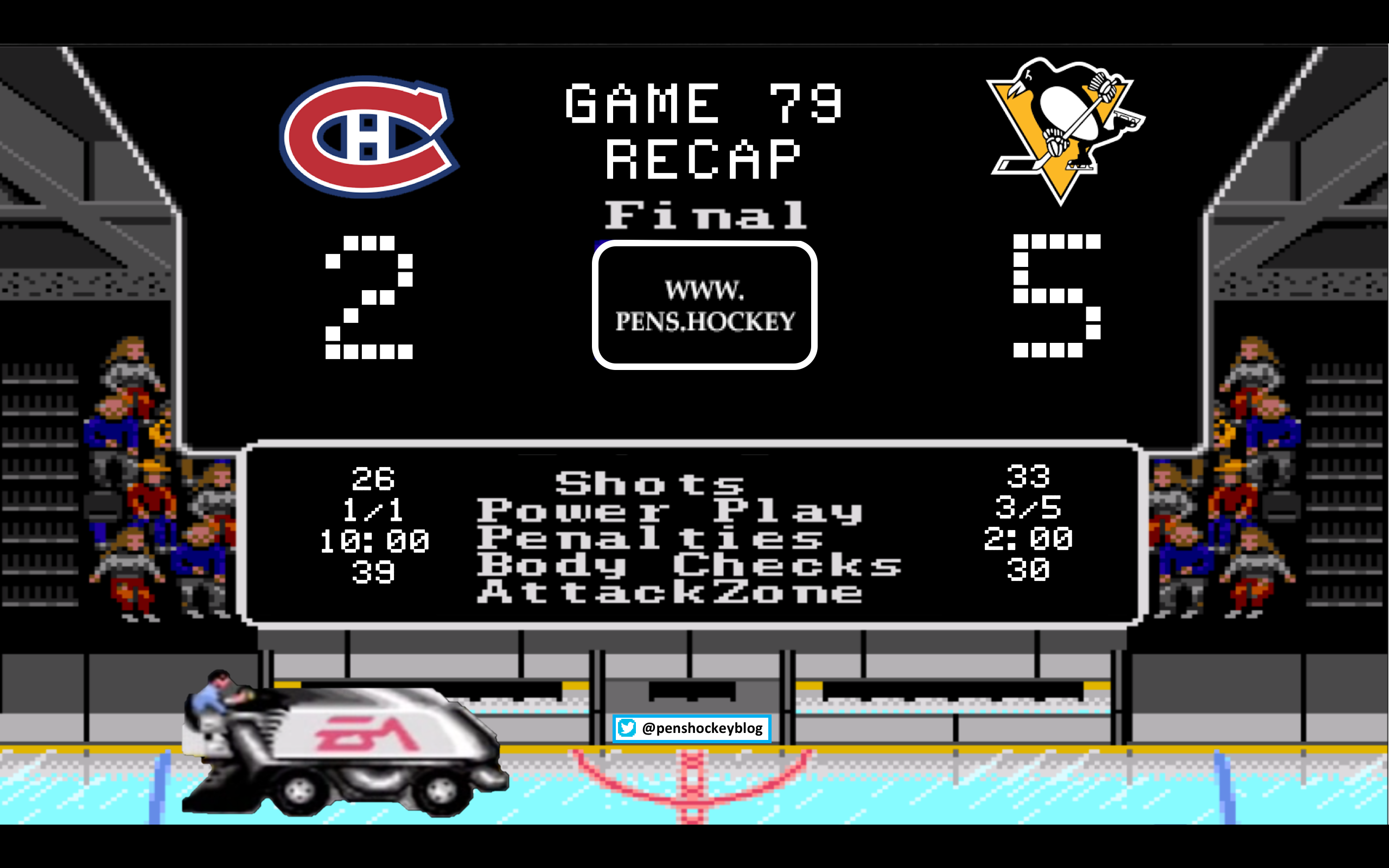 The setup for this game was pretty simple. The Bruins handled the Panthers earlier in the day meaning the Penguins needed 2 points in any form to clinch a playoff spot. No fancy math equations needed, just a simple message:

The Penguins didn’t make any changes to the lineup used in New Jersey:

Some were wondering why Murray was in net with the Caps tomorrow and the reason is simple, get the two points in this game with the goalie that gives you the best chance, and there is only one person Sullivan turns to when he needs a win.

The Penguins talked the talk in the pregame interviews but did not remember anything that they preached once the game started as Montreal came out of the gate firing. Murray had to make a few big saves early before the Penguins even got a shot on Niemi. The Pens finally found their legs and started exchanging chances with the Habs but Niemi was up to the challenge. 8 minutes into the period Jeff Petry put a puck towards the net that went off of Malkins skate causing it to completely change direction on Murray as the Pens fell behind 1-0.

[Montreal fans have apparently packed it in, there is no gif of this goal on Twitter] 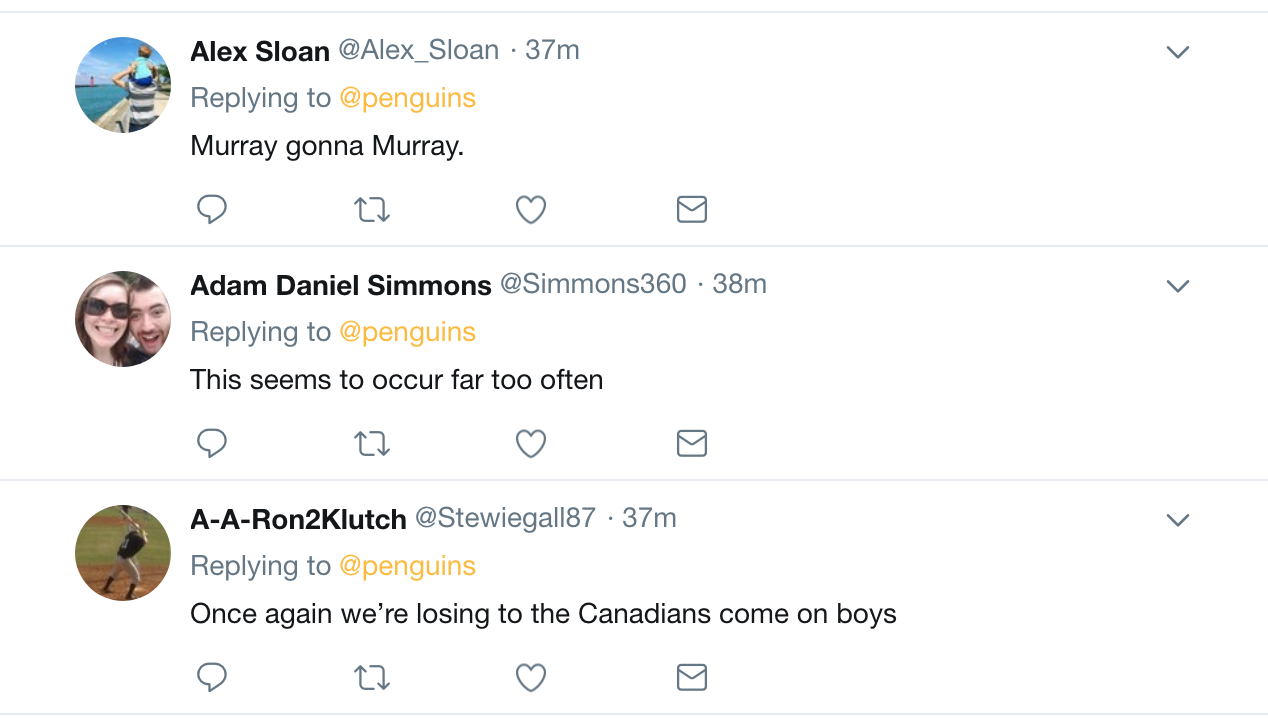 Murray gonna Murray says the guy that probably blew his load last year while Murray finished the Stanley Cup Finals with back to back shutouts.

Conor Sheary is 3 goals away from back-to-back 20 goal seasons folks. This line was completely dominating the first period even before this goal and I truly think they are going to give Sullivan some interesting concepts to toy around with once Brassard is healthy.

Following the goal Josh Jooris put on his business cap and sold a hooking call to the ref to put the Pens on the powerplay. During the powerplay the Canadiens thought it would be a great idea to give Patric Hornqvist 15 square feet of ice in front of the net for free…

Just another day in the office.

This is such a great play by Hornqvist to call for the puck and then put his money were his mouth his with the deflection, rebound, forehand to backhand get outta heah. 200th career goal for Hornqvist as he surpasses the 25 goal mark for the 3rd time in his career (career high 30 in 2009-10).

The Penguins responded with more pressure and Montreal looked completely lost. Not even 5 minutes after the Hornqvist goal we saw vintage Pittsburgh-era Niemi.

BANK SHOT! @CarlHagelin is getting in that Final Four spirit for his alma mater! pic.twitter.com/1cVDbRvm7h

Excellent work by Hagelin to stick with this puck and throw it onto goal as it is perfectly fitting that Niemi once again failed to hug the post in Pittsburgh. Just the smallest goaltending detail that he forgets results in a goal that shouldn’t have been.

The Penguins continued pushing the envelope in the period and Montreal would occasionally get a decent look but they couldn’t sustain much pressure. It seemed like the Pens would be taking a commanding 2 goal lead into the locker room until Jake Guentzel decided to play Butthead instead of Beavis… 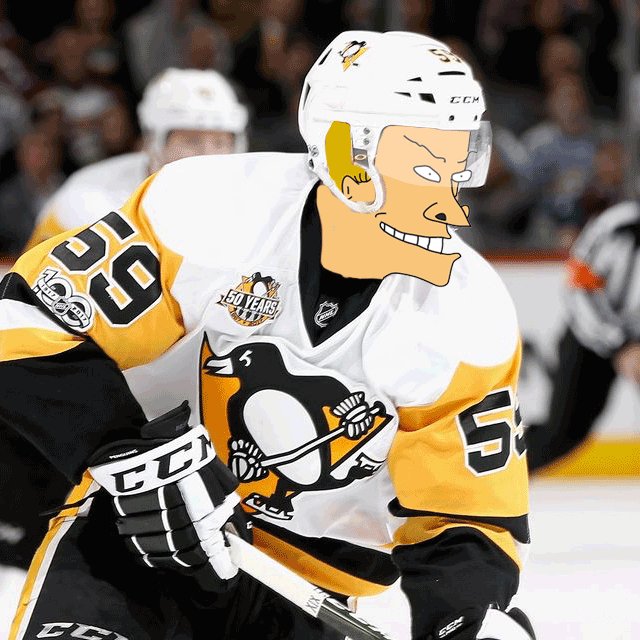 as he crosschecks a Hab and the Montreal powerplay got to work.

The Canadiens got set up, Galchenyuk sent one to Drouin and he puts a perfect shot into the top corner.

French Canadians, man. This is the only image for the goal and it is a shame because it was a nasty shot.

The second period can be summed up in 5 words, there were 11 shots total. 7 for the Penguins and 4 for Montreal.

The rest of the period… 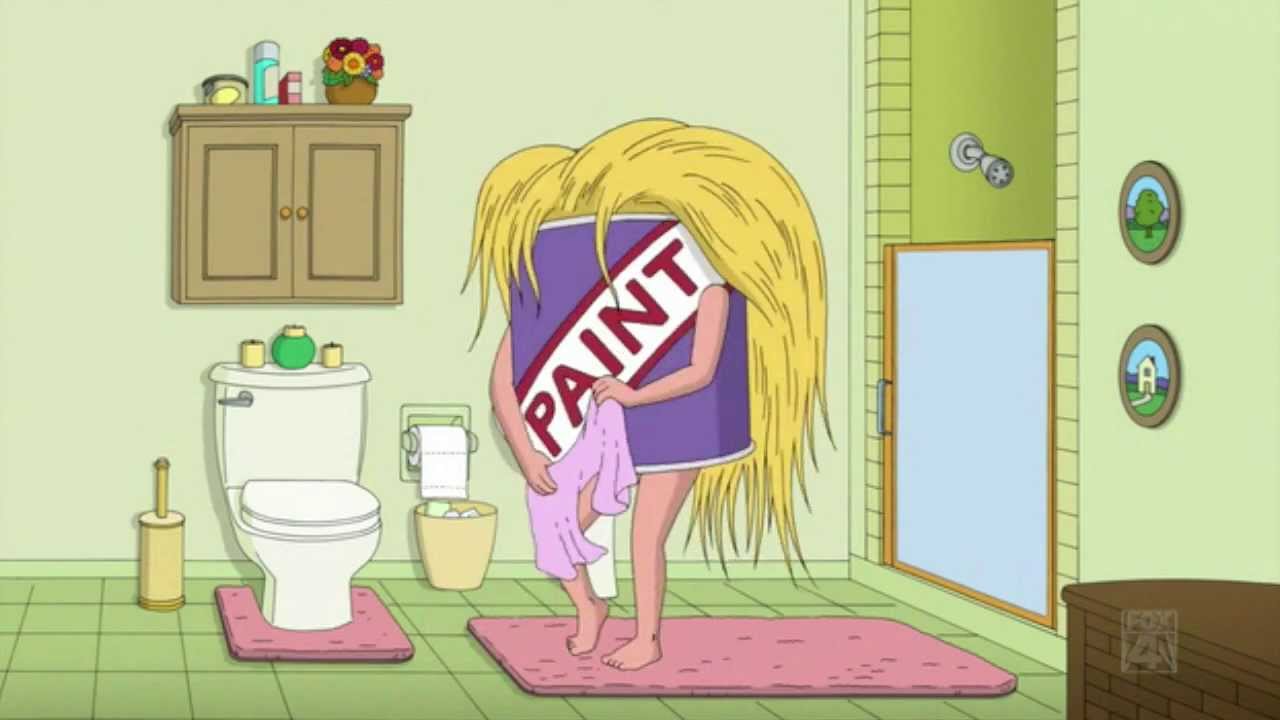 The Penguins knew what this third period meant, hold off Montreal and their playoff ticket was punched. Mike Sullivan was most likely not pleased with the way the second period was played so I’m sure the message in the intermission wasn’t “hold them off.” It became obvious that the message was received as the Pens came out flying and within the first few minutes Bryan Rust had a breakaway that Niemi denied. The Canadiens found their footing and tried to get the game tied but Murray was giving his haters a rough night. Eventually Crosby started doing Crosby things as he singlehandedly wore down the Habs defense leaving them with no choice but to take a penalty soon after. Immediately the Habs got a shorthanded breakaway but [insert douche bags name here] fanned on the shot when his hand slid off his stick. As we’ve seen time and time again the Penguins took the misfortune and shoved it down their opponents throat, this time after some nice passing to get the Habs jumping around.

CAN YOU PHIL THE THRILL?

Kessel with the intended pass bounces off of Petry and in as karma comes back around for the Habs first goal. Excellent passing by the Pens and the powerplay unit gets a nice break that they desperately needed after struggling lately. 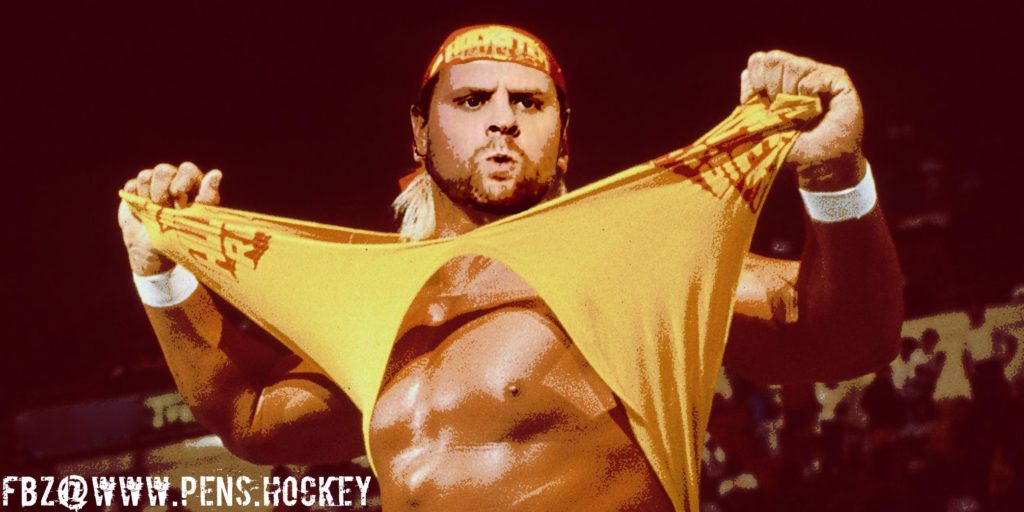 Following the goal the Penguins went straight for the throat and Montreal didn’t have an answer, eventually Conor Sheary was on a semi-breakaway that he was able to draw a penalty on due to a slash. The powerplay went back to work and they tasted blood. The first unit couldn’t get much done as they gave up another shorthanded breakaway, this time Murray had to come up large

so the second unit stepped up as “Murray! Murray!” chants started to resonate through the Paint Can. The Pens got into the zone, had some issues setting up and then got the puck to Olli Maatta

Initially I thought that the puck was fluttering and dropped naturally, but Sheahan was given credit for the goal. It wouldn’t surprise me if they end up giving it to Maatta but who cares?

The Habs started to bring som effort but Matt Murray went into playoff mode and decided enough was enough. The time was winding down, the arena was getting loud, and the Pittsburgh Penguins punched their ticket to the Stanley Cup Playoffs for the 12th consecutive year after securing the

So now the Penguins get to stay at home to take on the beloved Washington Capitals tonight. As it stands now this will be the final meeting between these two teams unless they meet again in the second round, which they have done every year the Penguins have won the cu in the Crosby era. The Capitals have once again managed to have a successful regular season and should lock up yet another Metro division title banner in the next week, it will go great next to all of the other participation trophies in the rafters.

Before we begin lets dive into what really matters here:

With a win in regulation tonight the Pens are 1 point back from Washington with the Caps having a game in hand. Looking at the home records and the away records we can see how much better these teams are at home, except for Philly because of course they enjoy playing anywhere else.

Washington has tonight against the Pens and the Blues tomorrow, then Nashville and New Jersey to complete their season.

Columbus has Detroit, Pittsburgh and Nashville every other day stating April 3rd.

The Penguins have the Caps tonight, Columbus and Ottawa on back-to-back nights to finish the season.

The Caps have don’t have an easy remaining schedule even with the game in hand and the Penguins can secure at least second place with a head-to-head win against Columbus even if they lose the other two games. The players know what their record is at The Paint Can, and they know if they win out they put the pressure on the Caps to get 4 points out of their remaining 3 games. Home ice against Columbus in the first round would be nice, home ice in the first two rounds has to be the ultimate goal in the lockerroom. 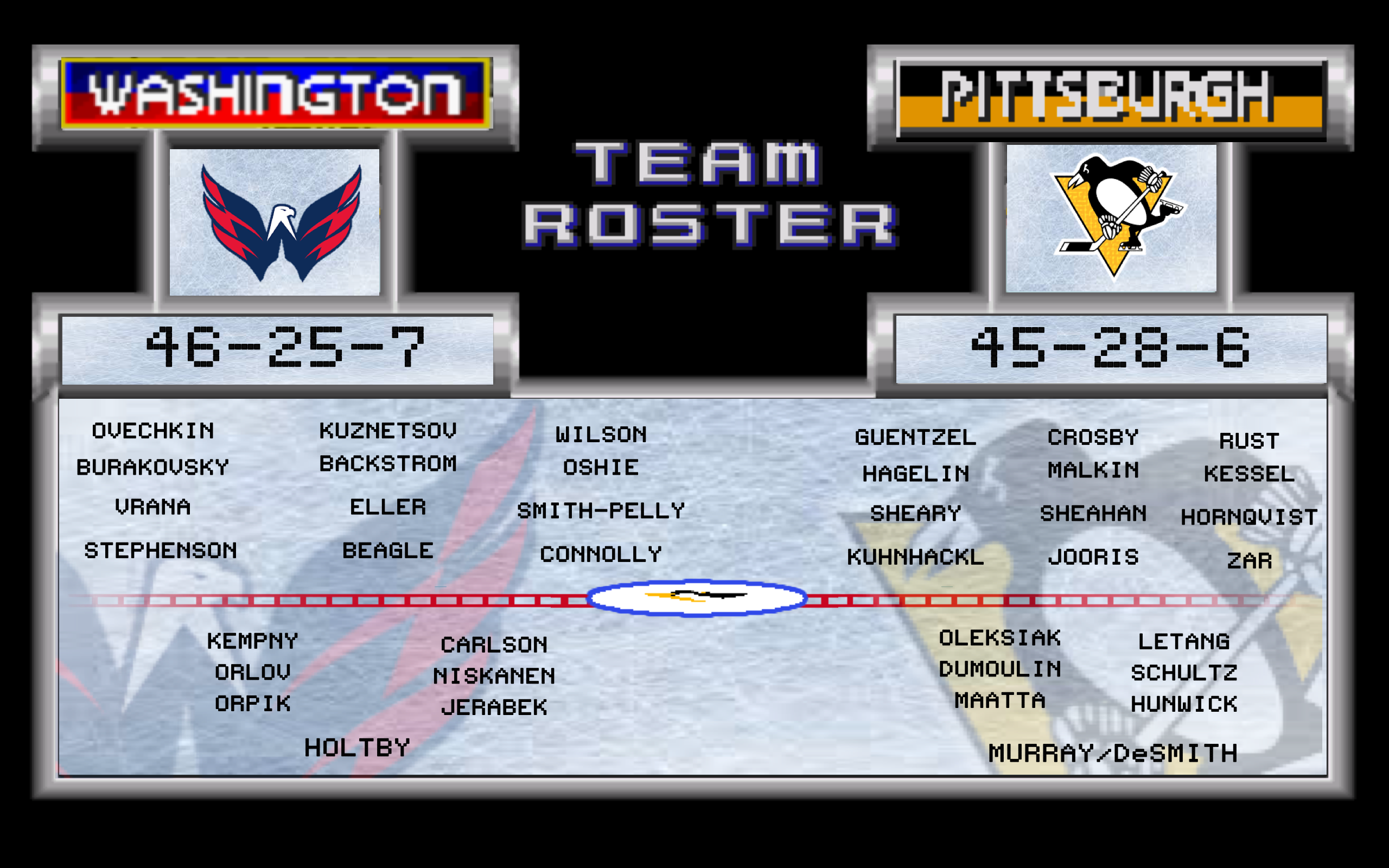 It wouldn’t surprise me to see Matt Murray int he cage tonight after a solid and rather light amount of work last night, this theory is supported by the team having 3 days off after this game to give Murray rest… and it is Easter Sunday afterall… 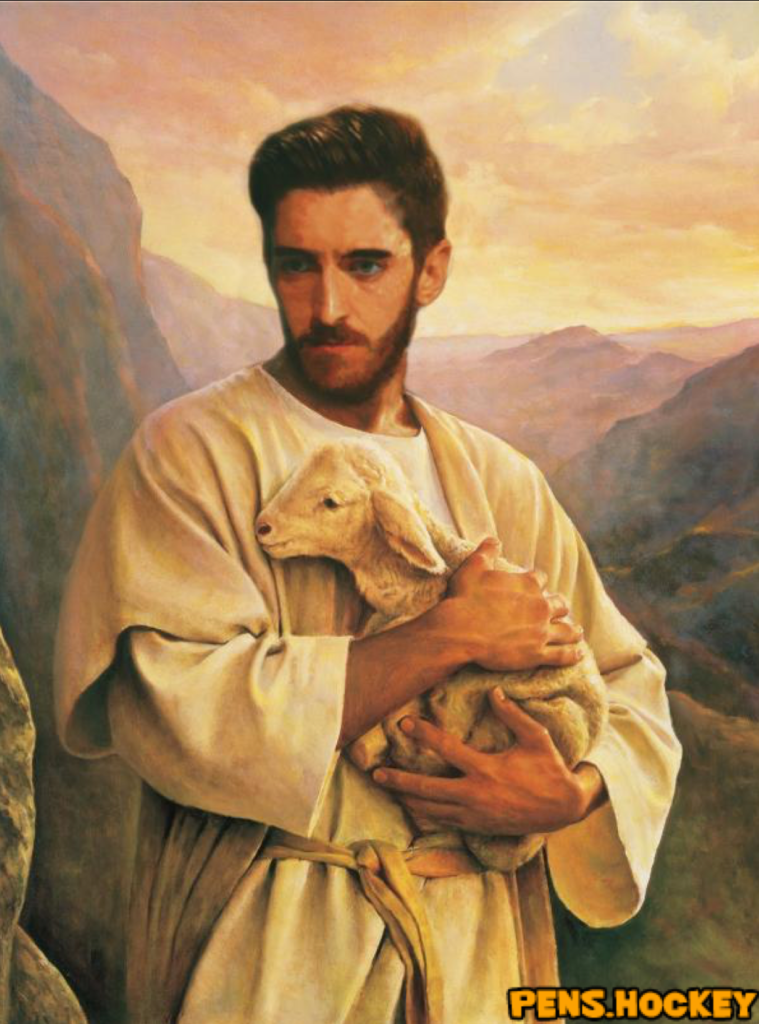 Some would expect the Pens to take the night off tonight after finally clinching a spot but I have a sneaky feeling that they have been gearing up for this game for awhile. Playing the Caps tonight, getting 3 days to practice new line combinations and then playing the Blue Jackets is a great way to end the regular season as the games are still meaningful and make the team pay attention.

The easiest way to predict playoff positions is with the same advice as in this posts opening media, it doesn’t matter what the rest of the league does, just win baby.