With a rare off-day today coupled with a back-to-back situation between games 42 and 43 I feel this is a good enough time to look at the Penguins as they stand at the midpoint. Technically this is 3 games premature, but the general argument is 500 minutes is needed for significant data, so those three games won’t change much.

I’m going to break this post down into two sections, who is who (looking at TOI, line combinations, specialty units) and what have they done (statistical look into the teams first 38 games).

Every image will be linked to their parent site unless the site is already cited in the image, the majority of stats were taken from hockeyviz.com, hockey-reference.com, corsica.hockey, and public.tableau.com (Sean Tierney’s site).

For me, one of the easiest ways to start dissecting a team is to see who is on the ice.

It isn’t a surprise to see the three best players who also make up the top powerplay unit have the highest ice times. Only 7 of 12 forwards is averaging > 15 minutes of ice-time per night, I thought this was odd at first but on further review the majority of teams have this spread as well (except for Vegas, a team where no forward has played 20 minutes in one game yet). The biggest concern in this graph for me is one I’ve touched on often, and that is the gap between the top 7 players and the other 5, a gap that makes it really hard to roll 4 lines consistently. I also have no clue why Bryan Rust is getting his TOI slashed; I’ve been a critic of it all season and the data shows that Rust would benefit from a permanent position with consistent minutes, you might be surprised who the data shows should be his permanent linemates. Since Sidney Crosby is no longer elite I was wondering if his TOI is too high for him?

The next step is to see which forwards are playing together: With a quick look you can now see why I question the usage of Bryan Rust, everywhere you look on this chart Rust is in the positives. The +/- refers to shots for/shots allowed during that shift (5v5 only). The best line combination has been Rust-Malkin-Kessel coming in at a +6, but the best combination overall has been Rust and Hagelin together, a duo that is +9. Considering Hagelin and Sheahan are +5 together, it probably wouldn’t be a bad idea to put Rust-Sheahan-Hagelin together for more than just a few games as those three players could create a huge shutdown line.

The ice time for the defenders: Kris Letang has had an average TOI of 26, 25, 26, 27, 26 minutes in the last five seasons, so his 26 minutes this year falls within his baseline average though he is a year older, struggling, and recovering from a short offseason of training. Olli Maatta is actually down a little in his career averages by one minute, but if that extra minute off is what has lead to his turn around then by all means take it. The injuries to Schultz and Soap Opera with Cole have really messed up the rest of this chart so let’s look at how they are doing:

Paging Mr. Rutherford, Matt Hunwick is not working out. The Penguins best defenders in terms of shots for/shots allowed are Letang and Dumoulin. In terms of pairings, Justin Schultz is ONLY positive when paired with… wait for it… Ian Cole. Matt Hunwick, who is constantly played over Cole, is ONLY positive with Maatta. If the team partnered up the most successful pairing in the first half it would look like: Letang-Dumoulin (+5), Schultz-Cole (+3), Maatta-Hunwick (+3). By removing Hunwick and throwing in Oleksiak gives the team a third pairing of Maatta and Oleksiak, which I would have no concerns about heading down the stretch with Ruhwedel as a 7th. Oleksiak is a -1 with 268 minutes for Dallas, though I still think he has a higher upside developmentally on this team, and would give him the nod over Ruhwedel for now but would have no issues if Ruhwedel was given a larger role. I guess what I’m trying to say is I don’t feel comfortable with the team shipping Ian Cole (unless the return is orgasmic) because it takes away the player Schultz has played the best with.

What are they doing?

The next phase of analysis is to look at deployment, team advanced stats, and overall play to get a feel for what the team is doing right (not much) and wrong (a lot). We will start with zone deployment to see where the players are starting most of their shifts? 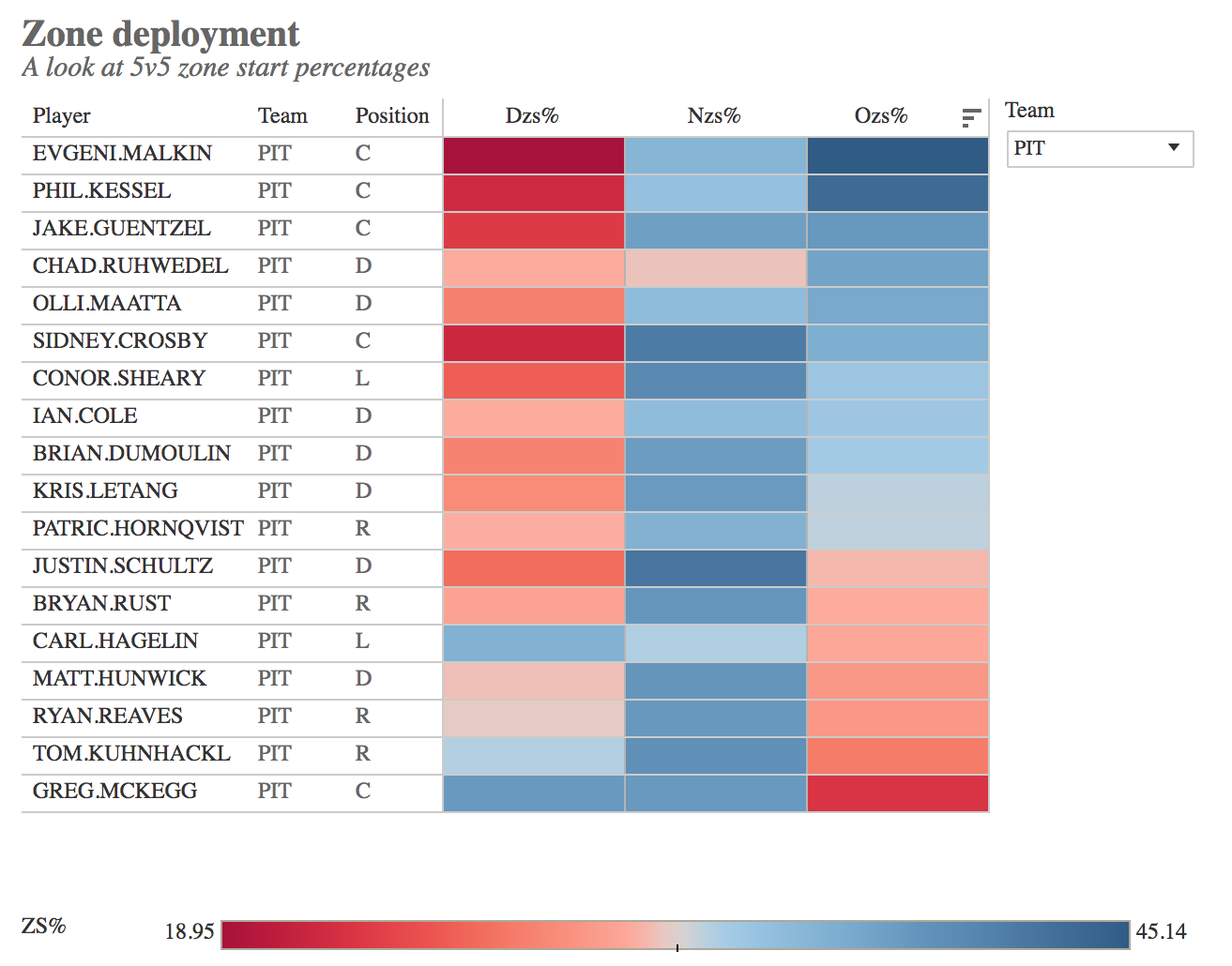 As you can see only Carl Hagelin starts the majority of his shifts in the defensive zone, and to be honest if there was one forward you wouldn’t mind doing so it would be Hags. It’s insane how few of Malkin’s shifts start in the defensive zone. Overall this deployment is perfect for the team, and is not the culprit of their struggles. Now let’s dig into the nitty gritty of the team, with a big thanks again to Sean Tierney, all of the following charts are from this MASSIVE compilation of data to date in the league. 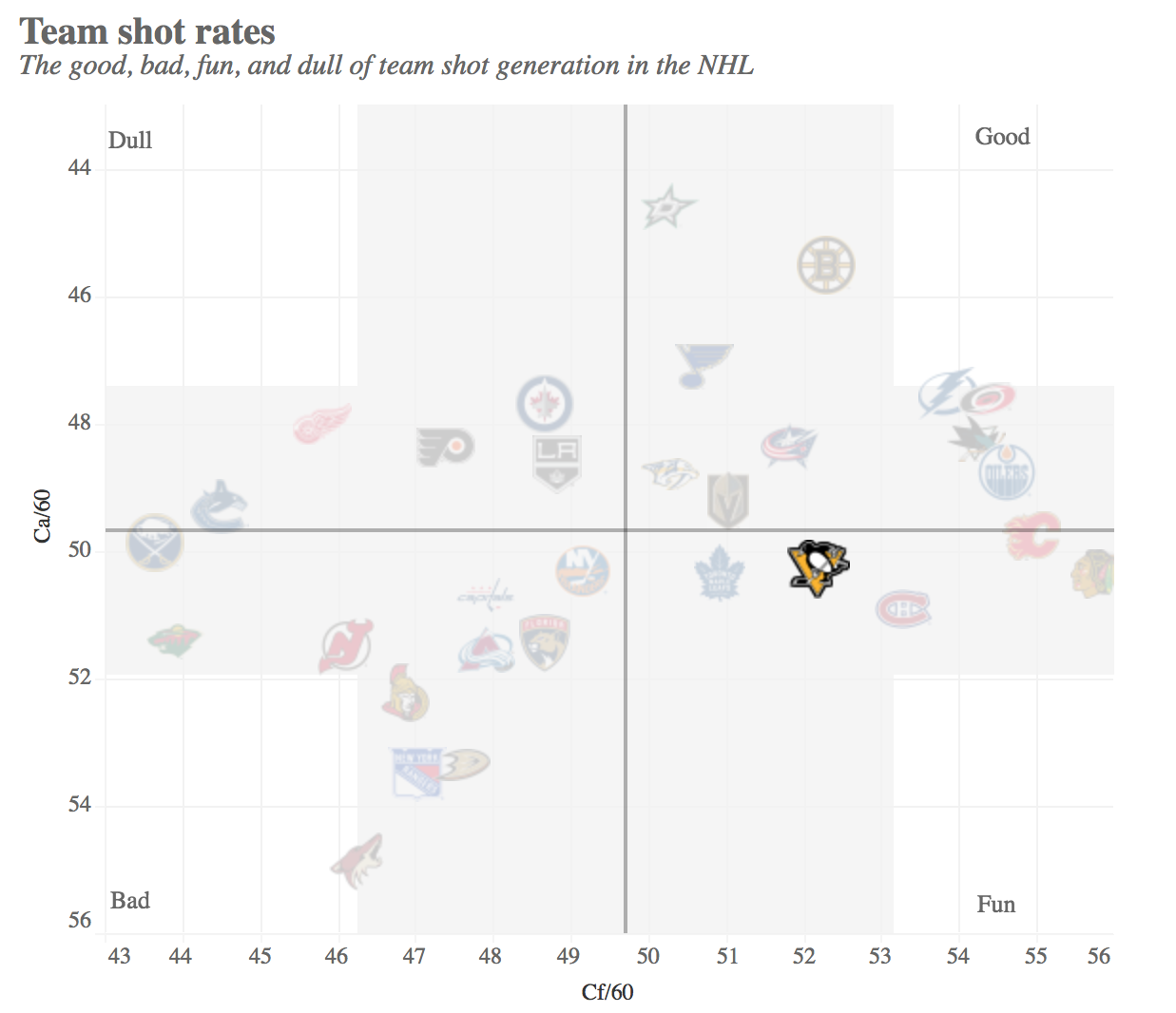 This chart looks at the corsi for/corsi against per 60 minutes of play, or simply put the amount of shots the team takes against the amount of shots the team gives up. The Penguins are on the “fun” side of things in this graph because they generate more shots than the league average but also allow more which makes for exciting games for nonpartisan viewers. Next we look at what Tierney calls “pace,” which is the Corsi For (CF) + the Corsi Against (CA). 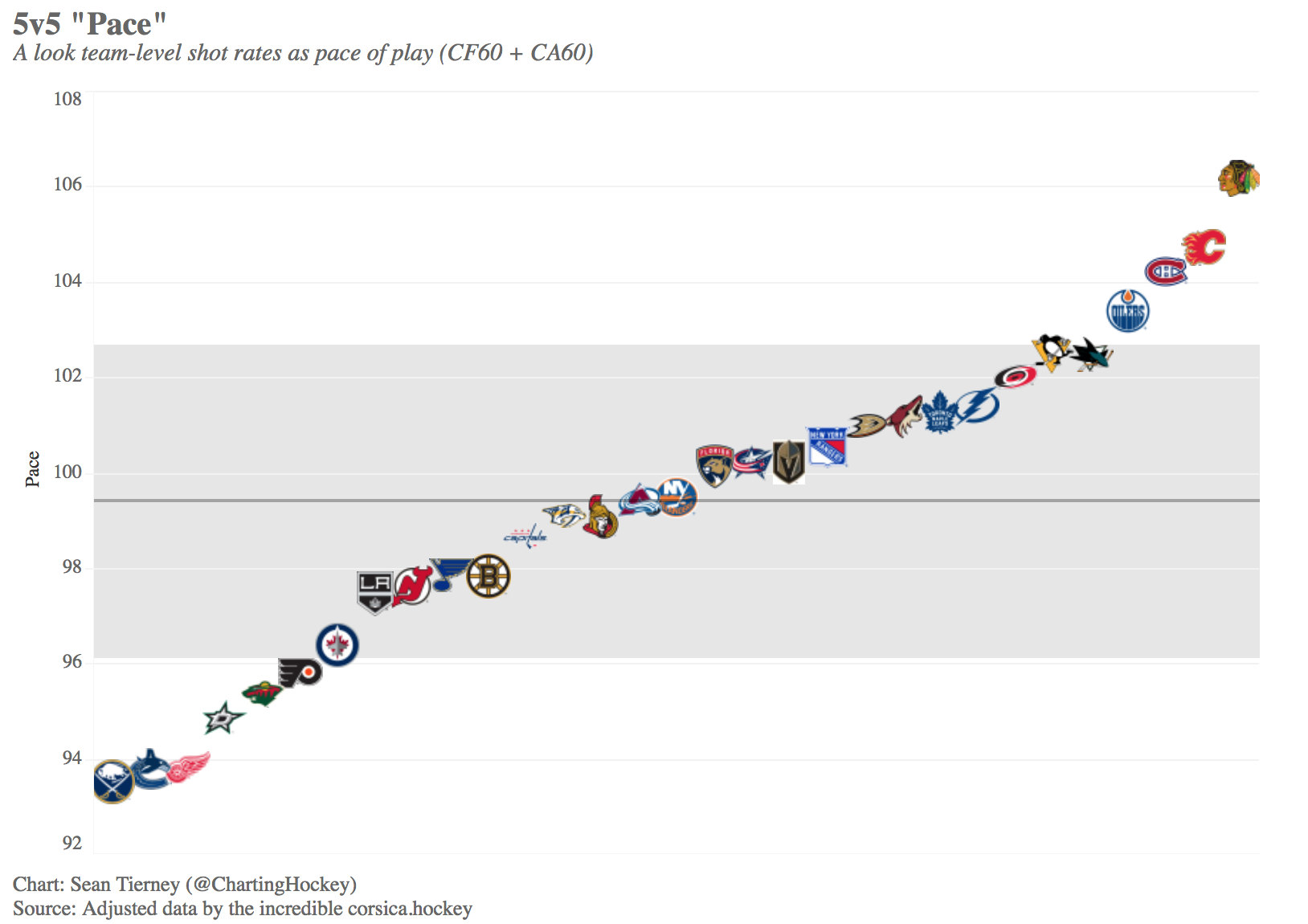 The gray box is where you want your team to be and the Penguins are just on the upper limit of okay in this one, the reasoning being their CA is too high. A perfectly even team in scoring chances would have a CF of 50 and a CA of 50, giving them a pace of 100. Therefore you can have a great CF of 55 and a CA of 40, a Pace of 95 which would be preferable to the Penguins pace of 103 because they achieved that number with a CF of 52 (good) and a CA of 51 (not so good, but not horrible). 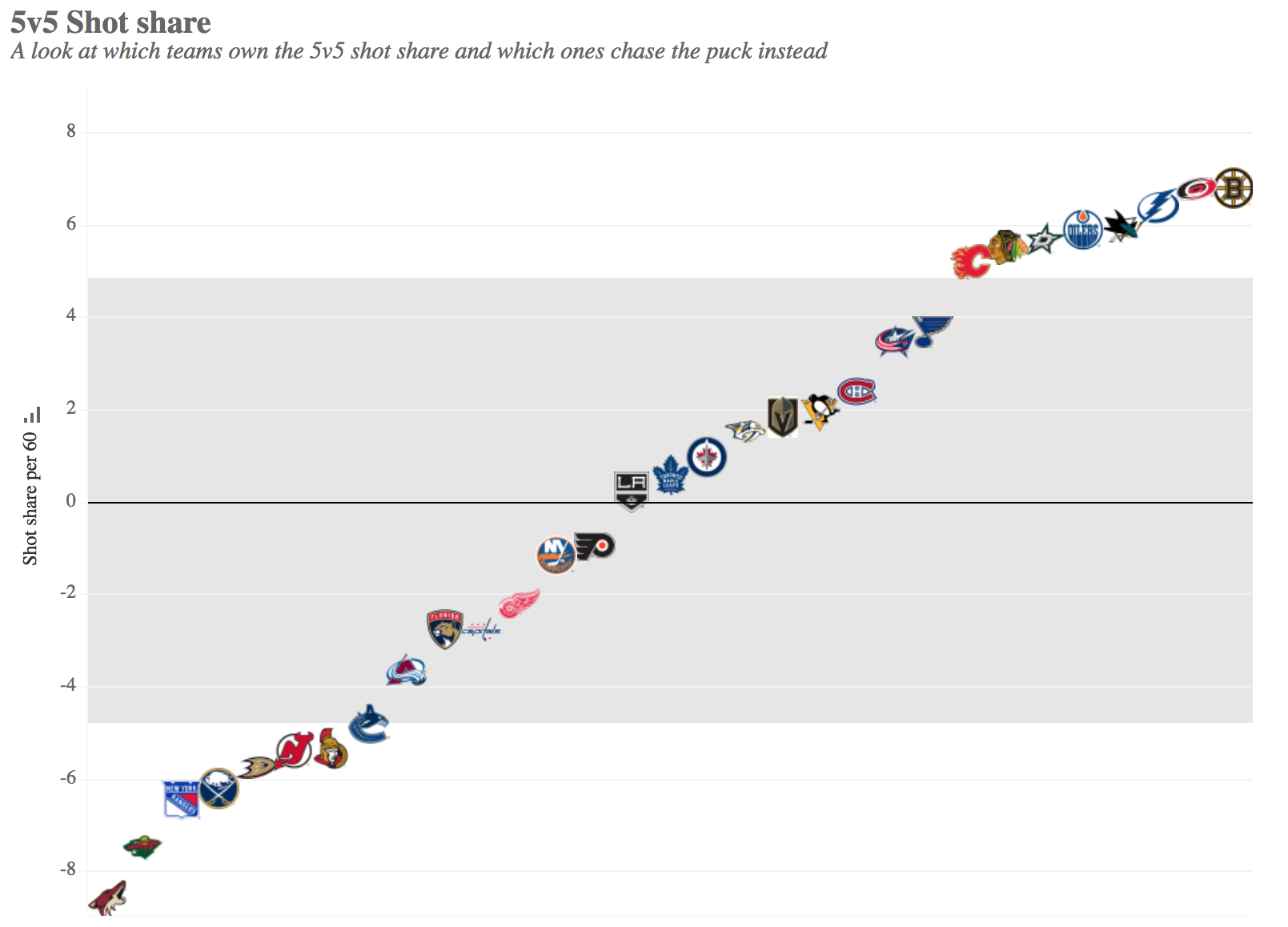 This chart simply looks at which team is getting more shots in 5v5 play. If the chart included all situations (powerplay, shorthanded, etc) then the Penguins would most likely be off the charts. Regardless, you want to see your team above the zero. 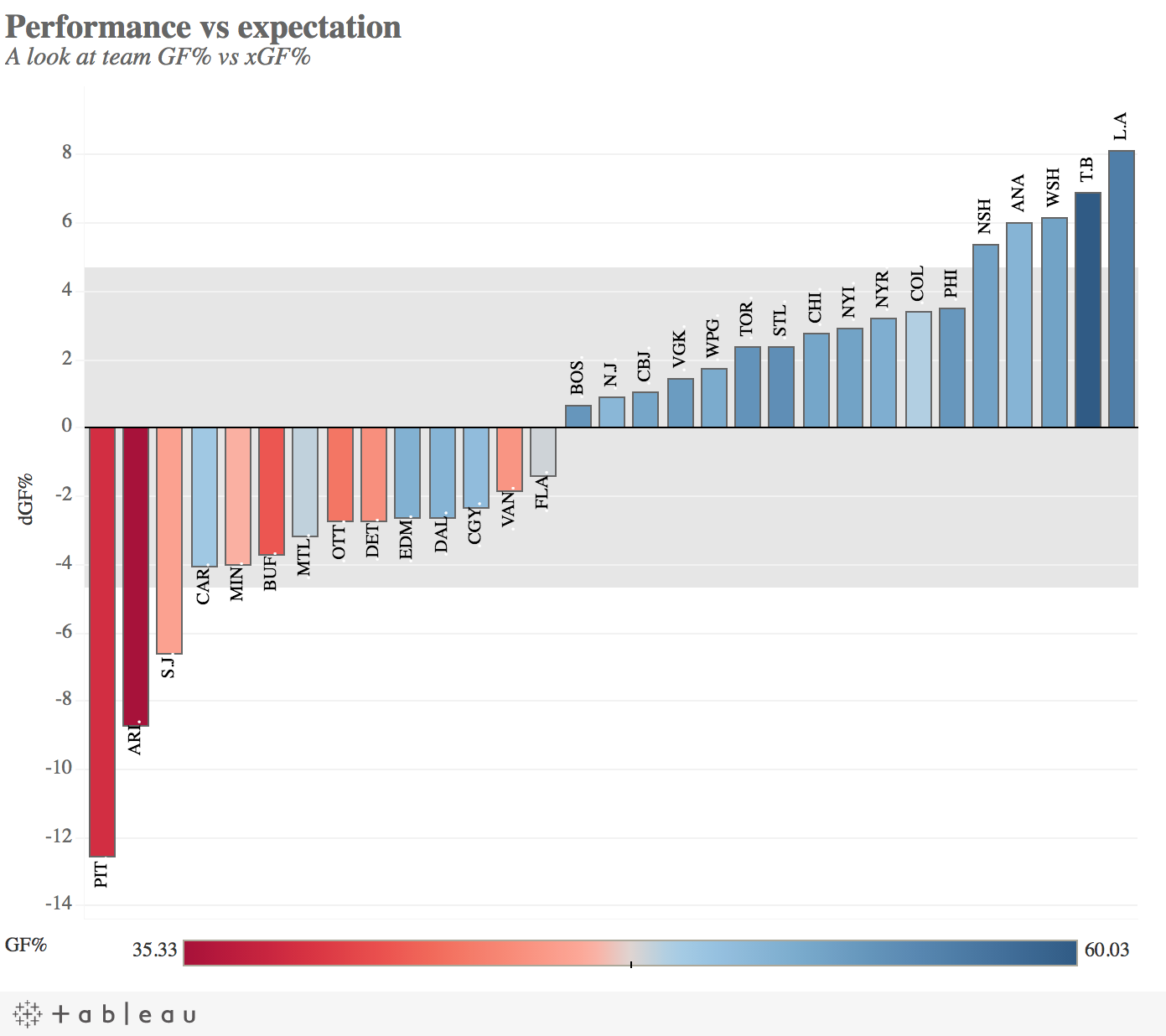 Expected goals for (xGF) is my favorite advanced stat, there is a lot of research going into this right now with the hopes of this being one of the most telling stats of how a team is performing. According to corsica.hockey the Penguins xGF in 5v5 is 71.41, their actual goals scored at 5v5 is 51. This tells you the team is not performing at 5v5 standards. When we include the powerplay unit and all other situations the teams xGF is 117.61, and their true goal total is 103. The team has closed the 20 goal 5v5 differential by 6 when we switch to “any,” and here are the xGF and actual GF in those situations: powerplay (xGF 32.89, actual 33), short handed(xGF 2, actual 5), 4v4 (xGF 1.83, Actual 1), 3v3 (xGF 3.35, actual 5). By this we can see that the Penguins are only failing to live up to expectations in 5v5 play, something that could be fixed with consistent roster spots so chemistry is built.

Finally we look at the “mother” of all stats, PDO, which as you may recall is a way to see if your team is lucky, unlucky, or just bad. 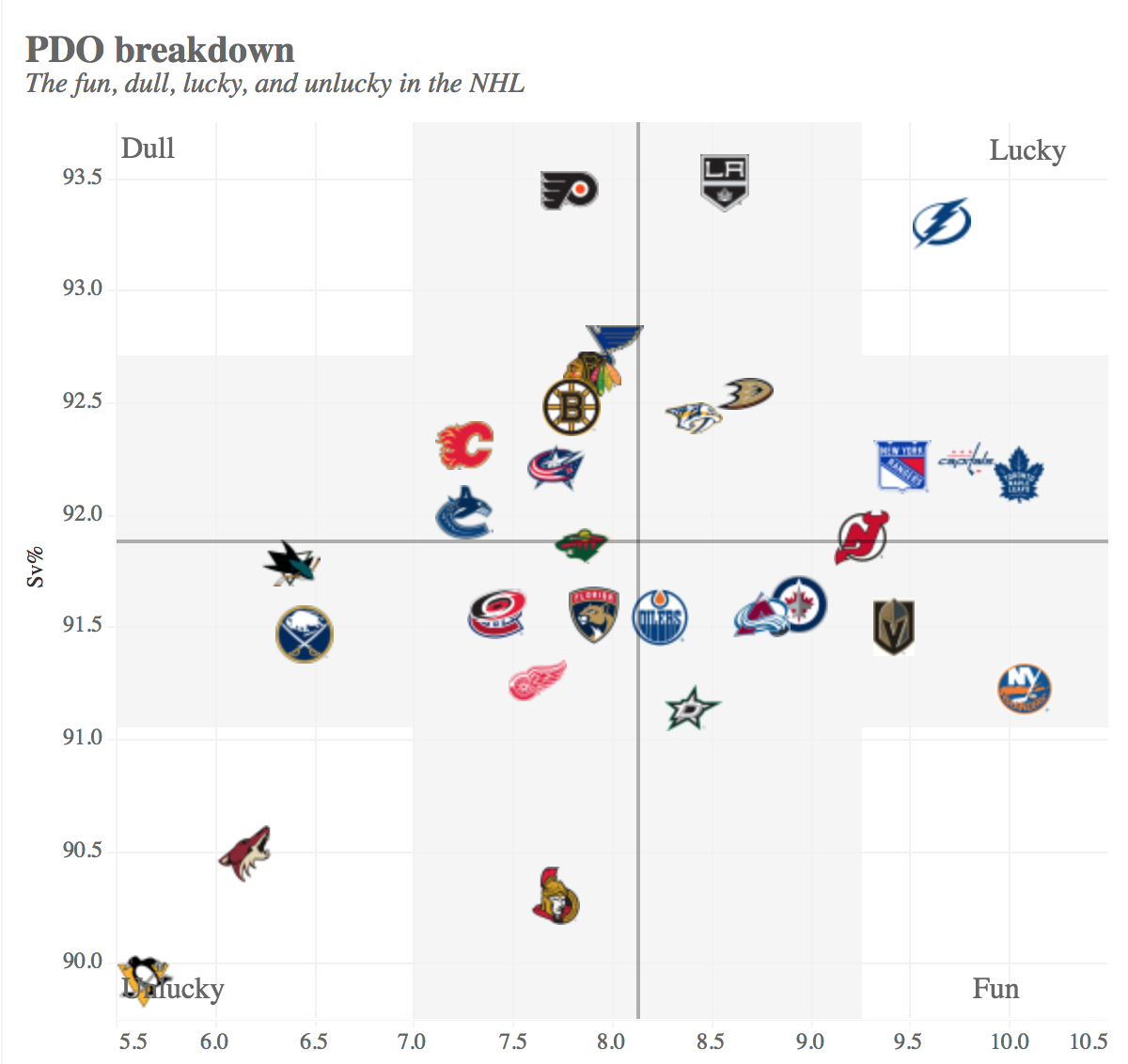 The Penguins are off the chart and not in a good way. PDO has it’s flaws, for example the Coyotes cannot blame their performance on being unlucky because they are just bad. The Penguins on the other hand have been beyond unlucky, with their 5.26 5v5 percent shooting percentage despite taking more shots than their opposition. The Penguins have actually only played 6 games above the PDO 100 mark: 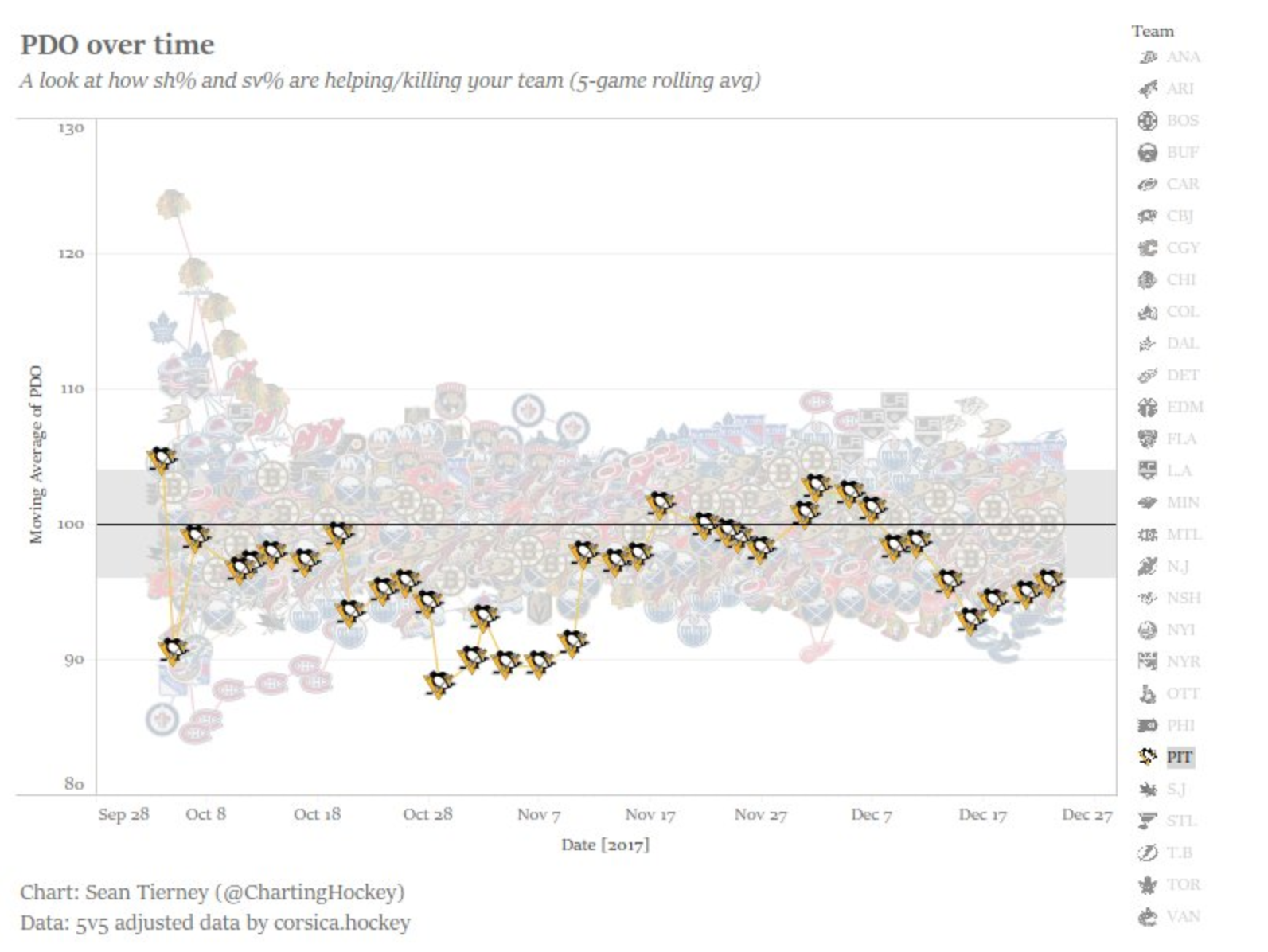 When you look at this timeline it is honestly incredible that the team is even .500. Finally, Sean looked at the components that make up PDO (sv% and shooting %) and applied them to the individual players on the team against league averages. Kris Letang fans, umm… don’t look: 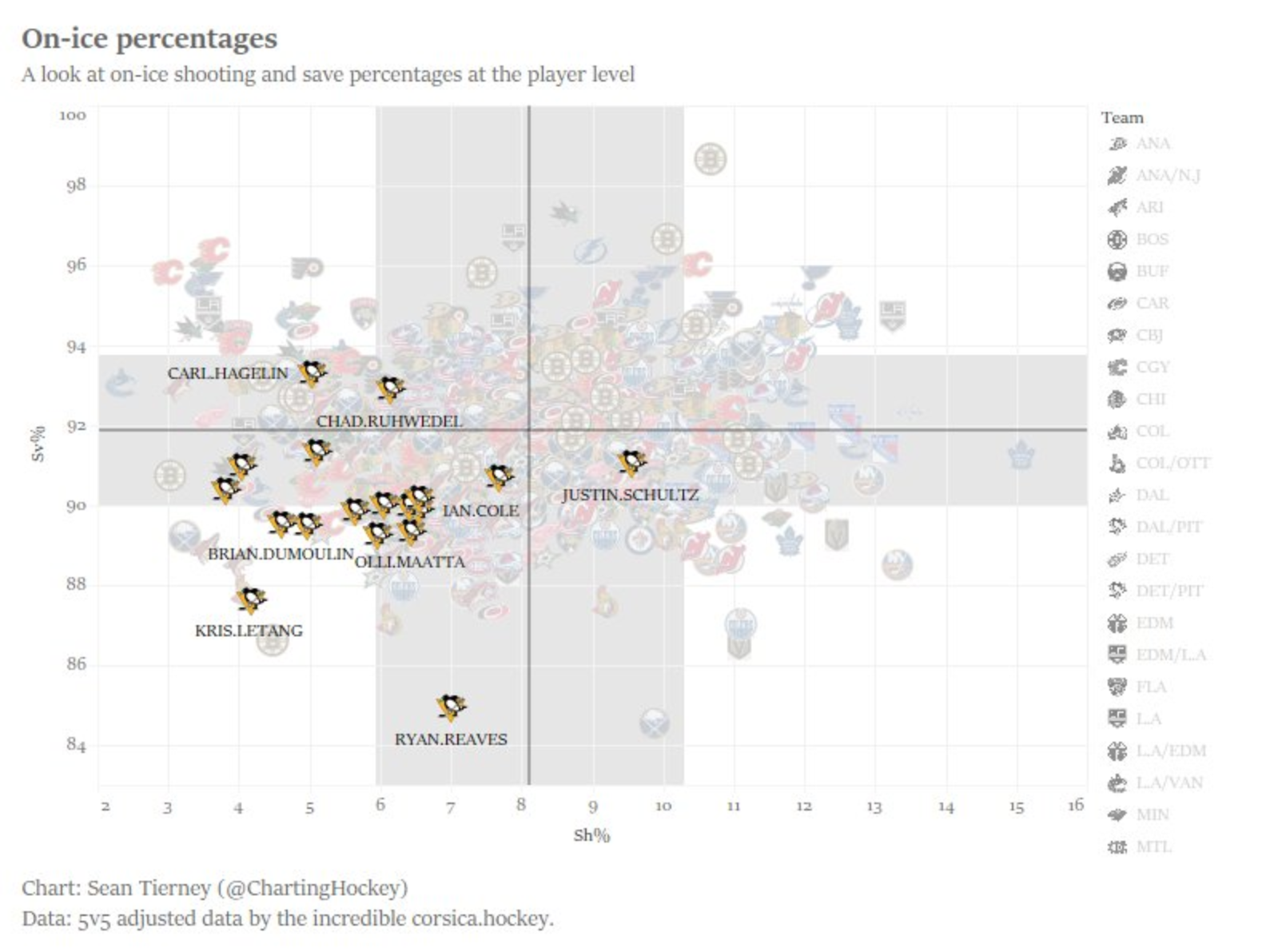 huh… Ian Cole… how about that?

ALL HOPE IS NOT LOST:

I like the 50% stat, I don’t like that 6 Metro teams are above that point. This means that one isn’t making the dance and it really puts how important the division games are into perspective.

Though we know Rutherford isn’t finished making moves with this team, I think the demand for a world class talent is a little much. All of the data above shows that the team isn’t playing poorly overall, they just aren’t playing as a cohesive unit. A trade or two would definitely shake things up, but I caution those out there expecting some huge trade that lands a premiere player. We’ve seen that move in the Shero era, it’s why Shero lost his job. A current rumor is the Penguins were unhappy with Daniel Sprong’s attitude so they are making him sweat it out in the AHL a bit, but as soon as he is called up and we get a look at him the lines should fall into place. Before writing this post I wasn’t so high on the third line, but now I am extremely interested in seeing what a Rust-Sheahan-Hagelin combination can do if they gel for a few games. Nothing can change a teams PDO quicker than a shutdown third line that outscores the opponents while stifling scoring chances. Potential lines based on 5v5 numbers only:

Obviously Sheary isn’t moving to the 4th line, and Ryan Reaves can’t be scratched so that is where the Penguins Daniel Sprong dilemma ends up. One of either Sheary, Rust or Hagelin moves to the fourth line, which isn’t a bad thing if that line will actually play 10 minutes a night.

Overall, it’s been a bumpy first half, but this team has also played more hockey than any other team in the league over the last two years. They’ve looked tired, they haven’t looked their best, and they are still right in the hunt. As we’ve seen before, PDO has a way of evening out. I;m not sure the penguins can get back to a 100 average for the season, but if they get anywhere close then look out Loretta because it is going to be a fun second half.