As a Penguin fan, outside of the Cup years, there are very few seasons as memorable as the 2000-01 campaign. During this time, we saw a little bit of everything, including an unexpected playoff run, 2 OT series clinchers for the ages, the exodus of an idol, and the legendary return of Le Magnifique from a 3-and-a-half year “retirement”. The season would also prove to be one of the most transformative years for the organization, as the events after the 2000-01 season would mark the beginning of some lean years in the Steel City. Pens fans would watch the win-loss columns switch, the roster move from Hall of Famers to borderline prospects, and the 90’s-mighty Pittsburgh Penguins rely on the draft lottery to keep “Pittsburgh” on their team’s sweaters. While it was brutal to watch the Pens in the early 2000’s, those horrific seasons would eventually produce generational talents, scoring titles, and 3 Stanley Cup runs. But you already know that.

Alright N00Bz, pop that collar, pick your favorite away message for your AIM profile, and throw that Razr in your cargo shorts; we’re taking a walk down memory lane.

The Penguins would be on their third head coach in as many years when Herb Brooks resigned after the 2000 playoffs and Ivan Hlinka took over for one season. Remember anything about that guy other than his name? 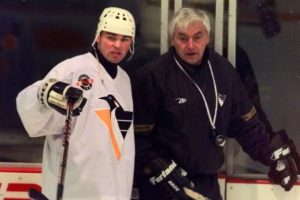 Me neither. Additionally, former Penguin Joey Mullen joined the team as an assistant coach with Randy Hillier. Notably, the Penguins added Brooks Orpik, Michel Ouellet, and Shane Endicott (lol) via the 2000 draft, though none of those players would see a minute of game time at the NHL level for a few years. No significant free agents were added over the summer, and the roster would look almost the same as the previous season…..until December (more on that later).

The Penguins started their season in Japan with pair of games against Nashville. 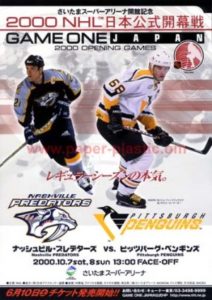 Though the Penguins were only in the island nation for around a week, Japanese records indicate that 453 children were born with the last name “Jagr” the next Spring. Strange coincidence.

The Pens would sputter around .500 (15-14-6-1) for the first half of the year. The team was fairly underwhelming…until they were given the best Christmas present in the history of the franchise on December 27th, 2000. Mario Lemieux would rejoin the team and, despite the lengthy hiatus, immediately became the best player in the league. The next time some idiot tries to tell you that Gretzky was the most talented hockey player of all time, show them this video:

That vision at 1:38 is unreal. The dude only needed a half a minute to get on the scoreboard and scored 1 G and 2 A in the tilt. That’s right, a 3-point night after taking 44 months off. The next game, he scored 4 points. Nobody should ever be that good at their job. As a bartender, I would forget how to make a Jack and Coke after a week off. Mario can have cancer, 2 back surgeries, turn 35 and do THIS in his first 8 games back: 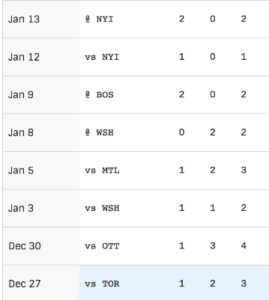 A very pedestrian 9 G, 10 A for Super Mario in his first 2 weeks back. No biggie. This was just a taste of what he would accomplish for the remainder of the season as Lemieux finished with 35 G and 41 A (76 points) in just 43 games. Read that again. Adjusted for a full season Lemieux was on pace for a 67 G, 78 A (145 points) season. This would have been roughly 25 points higher than Jaromir Jagr, who won the league scoring title with 52 G and 69 A…..nice!

It’s also important to remember that this is smack dab in the middle of the dead puck era. Steve Dangle has a great article on 66’s incredible comeback, where he mentions that Mario had twice as many 3-point games as 0-point games, paced the league in goals AND assists per game, and (when adjusted for era) would have had 156 points in today’s game. Connor McDavid won this year with 108.

With the boost from Mario, the Pens went 27-14-3-2 in their final 46 games, landing them 3rd in the Atlantic Division, and 6th in the Eastern Conference- good enough for a date with the Capitals in the first round of the playoffs.

Kevin Stevens returned to the Pens after several seasons with the Flyers. He would score 23 points in 32 games, with an 8-ball of goals.

Johan “The Moose” Hedberg was acquired from San Jose at the trade deadline and had an incredible run. In his rookie season, and in only 9 games with the Pens, The Moose went 7-1-1 and earned the starting job over J.S. Aubin and the ghost of Garth Snow.

The Pens bid farewell to Matthew Barnaby, the only individual who has ever blocked me on Twitter. Here’s his mug shot. 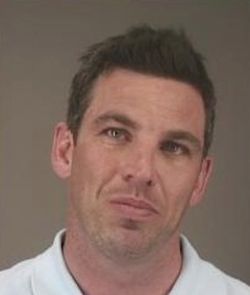 With the aforementioned match-up with the Washington Capitals looming, the Penguins scrambled to cope with the losses of defensemen Darius Kasparaitis and Hans Jonsson, as well as forward Kevin Stevens, all of whom were injured in the last few games of the season. As expected, they dropped the first game in Washington, only to win 3 of the next 4. Up 3-2 in the series, the Pens went home for a very pivotal game 6. Tied 3-3 in OT, Mr. Straka teabagged our good buddy Sergei Gonchar and sniped his way into history. Pay attention to the celly.

The 2nd round saw the Penguins matched up against Dominik Hasek the Buffalo Sabres. Pittsburgh easily won the first 2 on the road, but got smoked in the next 2 in the Igloo. The home team would win the next 2 games by a score of 2-3, both in OT. This set a familiar stage for a Game 7, again tied 2-2 and headed into overtime.

That belly-flop never gets old. Kasper’s goal was only his 4th of the season and just his 2nd in the playoffs despite playing in 55 postseason games. Oh, and he beat arguably the best goaltender of all time for the GWG.

The Pens luck would run out in the next round against the eventual Prince of Whales Trophy winners, The New Jersey Devils. Pittsburgh was outscored 17-7 and was dispatched in 5 games. Somehow, though, this would only be the second biggest loss for the Penguins that season.

Over the course of the 2000-01 season, superstar Jaromir Jagr decided he had had enough of da ‘Burgh and even muttered his infamous “dying alive” line to reporters. He was traded to Washington on July 11th for a figurative bag of pucks pretending to be literal NHL prospects and players. Though the loss hurt Penguins fans, his stats in Pittsburgh were nothing short of astonishing over his first 11 seasons:

Despite playing in another 13 NHL seasons, Jags only scored over 90 points twice. He accomplished that feat 8 times as a member of the Penguins. As we all know, Jagr left during his prime to play 3 seasons in Europe, only to come back an bounce around the United States (and Canada, too, eh?) for the next several years. It would be interesting to try to estimate how many more points he could have scored had he remained a Penguin throughout his entire career….but that, of course, would have totally jeopardized the Pens drafting Fleury, Crosby, Malkin, and many others that helped the them earn their 3 championships since Jagr’s departure. Silver lining, people.

With Jagr gone, a rookie goaltender in net, and Mario only dressing for 24 games, the Pens would tank in 2001-02 and miss the playoffs for the first time in 11 years. Their last place finish in the Atlantic Division was good enough for 12th in the East. Unfortunately, this would be their best finish for the next 5 seasons.

As a side note: I also find it amusing that remembering anything about this time period is definite street cred among Pens fans. I hate the “you’re a bandwagon fan, so I’m better than you” mentality, there is a certain camaraderie earned when you suffer with other people. I’ve always been happy to see anyone cheering for the Pens, but those of us who endured the early 2000’s seemed to enjoy that 2009 Cup just a little bit more. Either way, thanks for reading. Now go try to enjoy your long, hockey-free summer day.