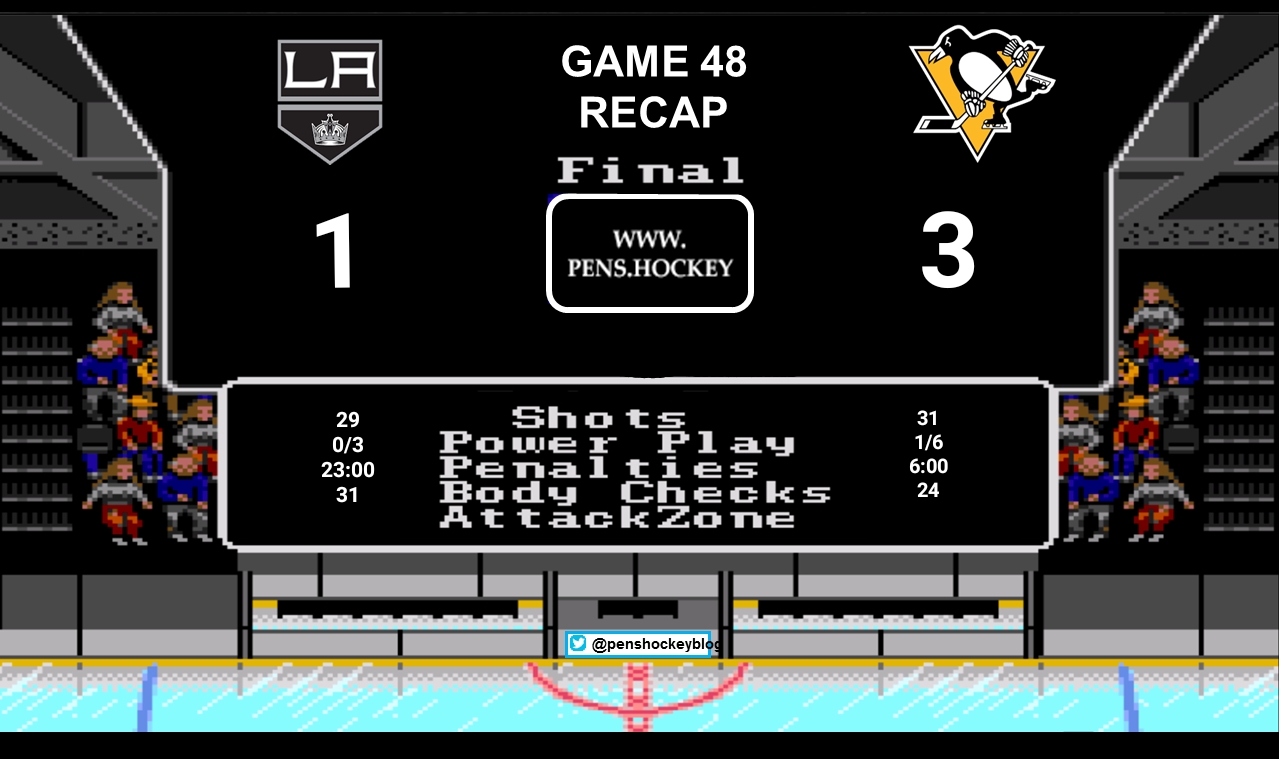 Coming off of a Dr. Jekyll and Hyde like performance against the Ducks of Anaheim it was time for the Pens to visit Ducks’ Freeway rivals, the Los Angeles Kings. The first leg of the back-to-back was entertaining and kind of cringy. Pens got many things right but there was an air of uncertainty on the ice with loads of miscommunication and general ‘out of sync-ness’. Luckily the game didn’t look like the 2017 Pens. 2018 Pens are a whole different beast.

Pens are still in dire need of points especially on a night when five Metropolitan Division teams gained points from their games.

Kings haven’t been that hot lately as they have lost four games in a row in regulation. They waived the former Penguin Jussi Jokinen this week who was picked up by Columbus yesterday.

Ian Cole still a healthy scratch. Casey DeSmith in goal. Daniel Sprong scratched and replaced by Jean-Sébastien Dea. Maybe Dea will get a shift in every period of the game…

43 seconds into the game Hörnqvist scores on Pens’ first shot on goal. That was quick. All Quick. Some heavy leakage in the Kings’ goalies five-hole. Hagelin with the assist. He has points in five straight games now and has great flow.

Just moments later Pens found themselves shorthanded after Oleksiak took a hooking penalty as a result of a threatening odd-man rush. DeSmith with some huge saves on this penalty kill to keep Pens in the lead.

Most of the first period went with Kings trying to add their stamp of physicality into the game with a lot of hitting. They certainly had the jump on Pens as they should have because it was their first game since Monday (defeat against the Sharks) and Pens, of course, played yesterday.

Pens didn’t get much action in Kings’ end of the ice. A powerplay opportunity came and went. Nothing to report.

DeSmith with a real solid period. He looked calm and made things look pretty easy. For the rest of the team: WAKE UP, please.

Pens looked like they shook some of the concrete off their boots as they put in a couple of good shifts to start the period. Dumoulin got two minutes for high-sticking. Pens fought the penalty off and then started showing signs of life with some really nice extended stints in Kings’ end of the ice. Crosby’s line especially dominating here. Great response to that flat first period.

Naturally once things start to look good for the Pens the Kings would score a goal. Pens agressive style of play truly is a double edged sword; defenders joining the attack, pinching on pinching on pinching. It’s high octane and it sure is fun to watch most of the time. Then there are time like these. Letang leaves his ‘station’ at the point and he is probably closer to the goal line than the blue line at this moment when both Kessel and Dumoulin go for the pinch along the board. Kopitar is able to keep the puck out of their reach. He then sets up Kempe who is off to the races and patiently beats DeSmith on the breakaway.

If nothing else the goal added a good spark into the game. The score is 1-1 heading into the second intermission.

I completely missed the start of the period because my internet connection decided that 7 in the morning is too early. When I got back online it sure was nice to see two Penguins goals on the board. Thanks Geno. Great way to kick off the third.

Pens began to pick up their speed and Kings had no other choice but to play dirty. First a slewfoot a la Folin and then Dustin Brown decided that he didn’t want to play in this game anymore…what a turd.

5-minute major penalty. 5 minutes of NHL’s best powerplay. Well, not so much the case this time…but Hörnqvist did score a goal 🙂 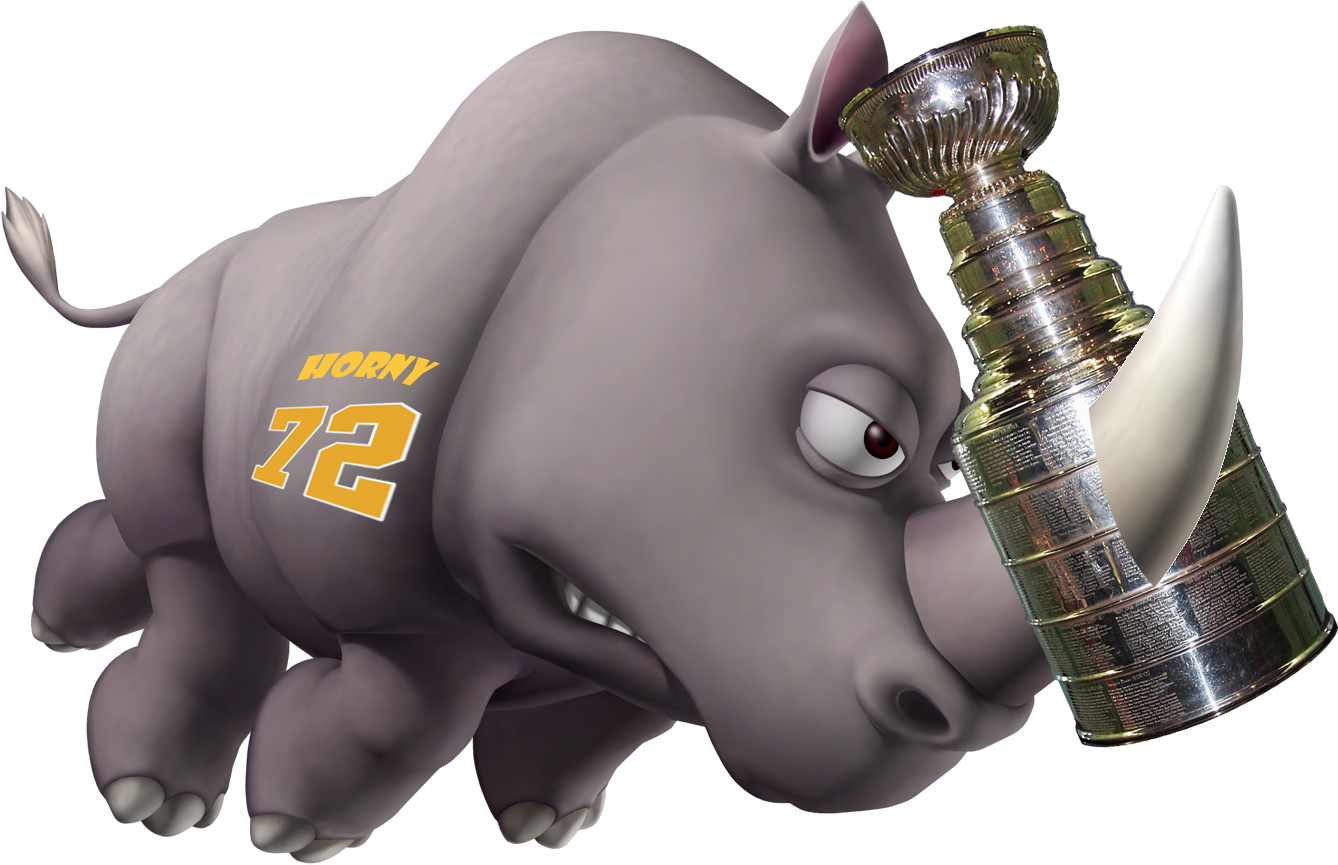 Kings were never able to bounce back from that. They took two more penalties and the Pens cruised to a well deserved victory. Pens out shot their opponents 28-18 in the last to periods.

◾ Congrats to Casey DeSmith on his first win in the NHL. Stellar frkn performance too.

◾Geno and Sid are playing a completely different level right now. I am not mentioning Pens’ leading scorer, two-time Stanley Cup Champion Phil Kessel here because he FAILED TO RECORD A POINT. Oops I guess I did mention him.

◾Dea with a whopping 3:29 of ice time and he did get at least one shift in each period.