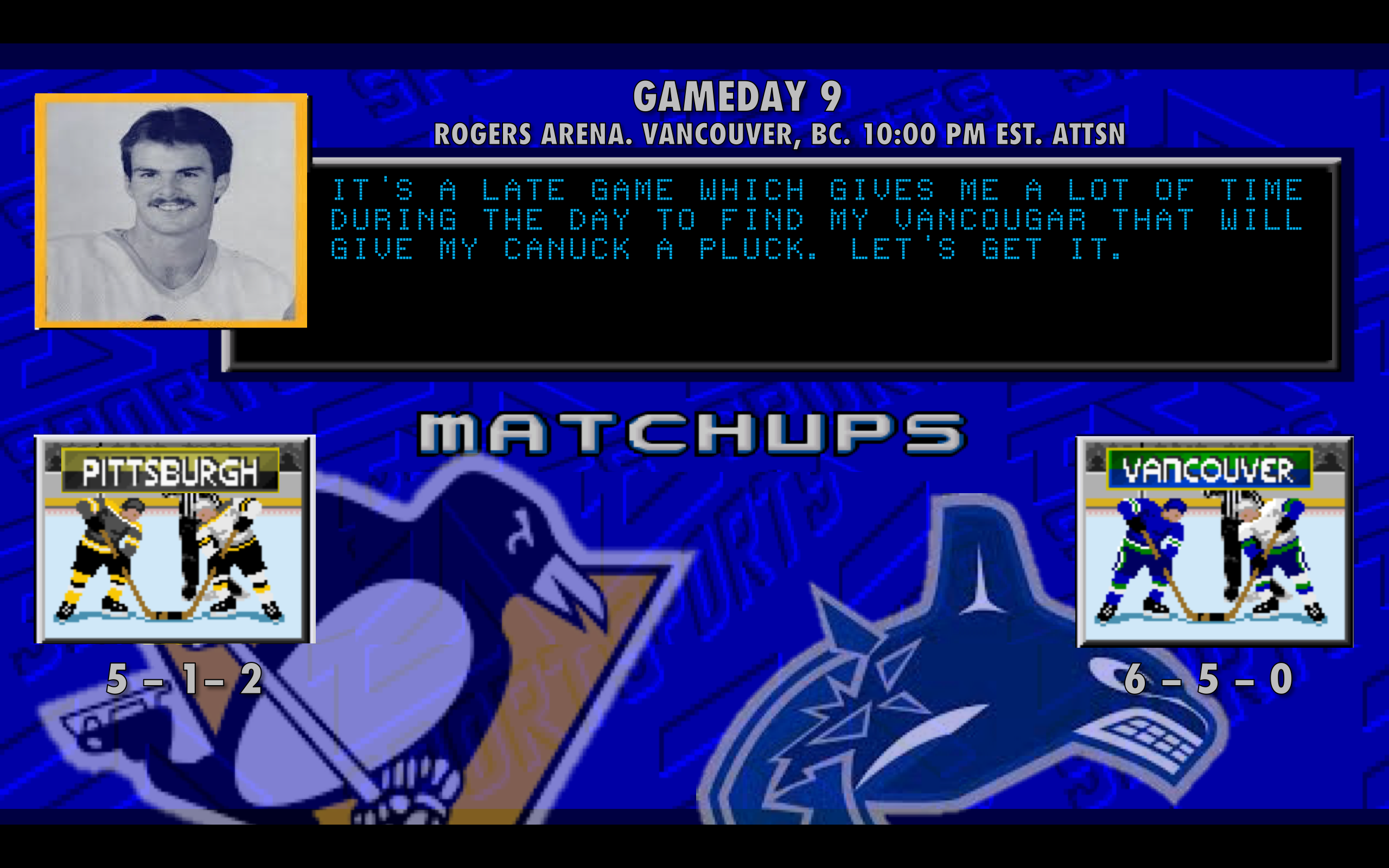 Tonight is the last game of the Pittsburgh Penguins’ trip to Western Canada.  A win tonight against the Vancouver Canucks will give them a clean sweep of their four-game road trip.

With the Carolina Hurricanes not playing today, a win would also put the Penguins in first place in the Metropolitan Division, something that seemed unimaginable when this road trip began *checks notes* less than two weeks ago.  For their part, the Canucks are tied with the San Jose Sharks for first place in the Pacific Division, and with the Sharks off tonight the Canucks are looking to earn sole possession of first in their division.

On top of that, the Canucks are looking to beat the Penguins twice in a season in consecutive seasons for the first time in four years, so the motivation is there for a Canucks team that few people expected to be doing as well as they are, even if it is early.

The Penguins, of course, may still be basking in the afterglow of a 9-1 walloping of the Calgary Flames on Thursday, their first nine goal game in almost ten years and their first eight-goal margin of victory since 1995.

It’s big wins like those that drives fans nuts, because they want to savor it as pretty much the whole team had some positive notes, but then you remember that big wins like that don’t come often and sometimes, like this past rout, it is mostly a matter of catching a team with their pants down.  Case in point, here is the shot pressure chart for that game, generated by Micah Blake McCurdy at hockeyviz.com: To understand this chart, look at it this way: the higher the peak, the more the play tilts in favor of the team the peak aims towards; the lower the valley, the less that team is able to get anything going in the offensive zone.  As you can see, the Flames had several periods where they were pinning the Penguins in their end: in the first half of the first period, for a fair chunk of the second, and about halfway through the third.  And yet, the Penguins were able to weather those storms and generate offense up and down the lineup.  Remember at the beginning of last year when the Penguins couldn’t get anything going on even strength? The Penguins are presently fifth in the League in even strength goals for (14th, or middle of the pack in EVGA) with the leaders having two more games than them.  With the offense clicking at even strength, Pittsburgh has been able to overcome their League-lowest twenty power-play opportunities and keep ahead of their opposition. 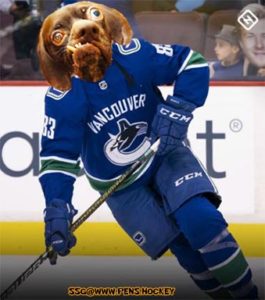 The offense has been very necessary with Pittsburgh’s opponents notching three or more goals in five of the Penguins’ eight games, and five-plus in three of them.  The good news is that Matt Murray appears to be getting into the groove of things, allowing one goal or less in two of the past three games.  He’s now near average on most of the boxcar and advanced stats, which is enough when the Penguins are scoring with relative ease, but time is going to come when Murray is going to be called on to carry the team when they aren’t so readily scoring. 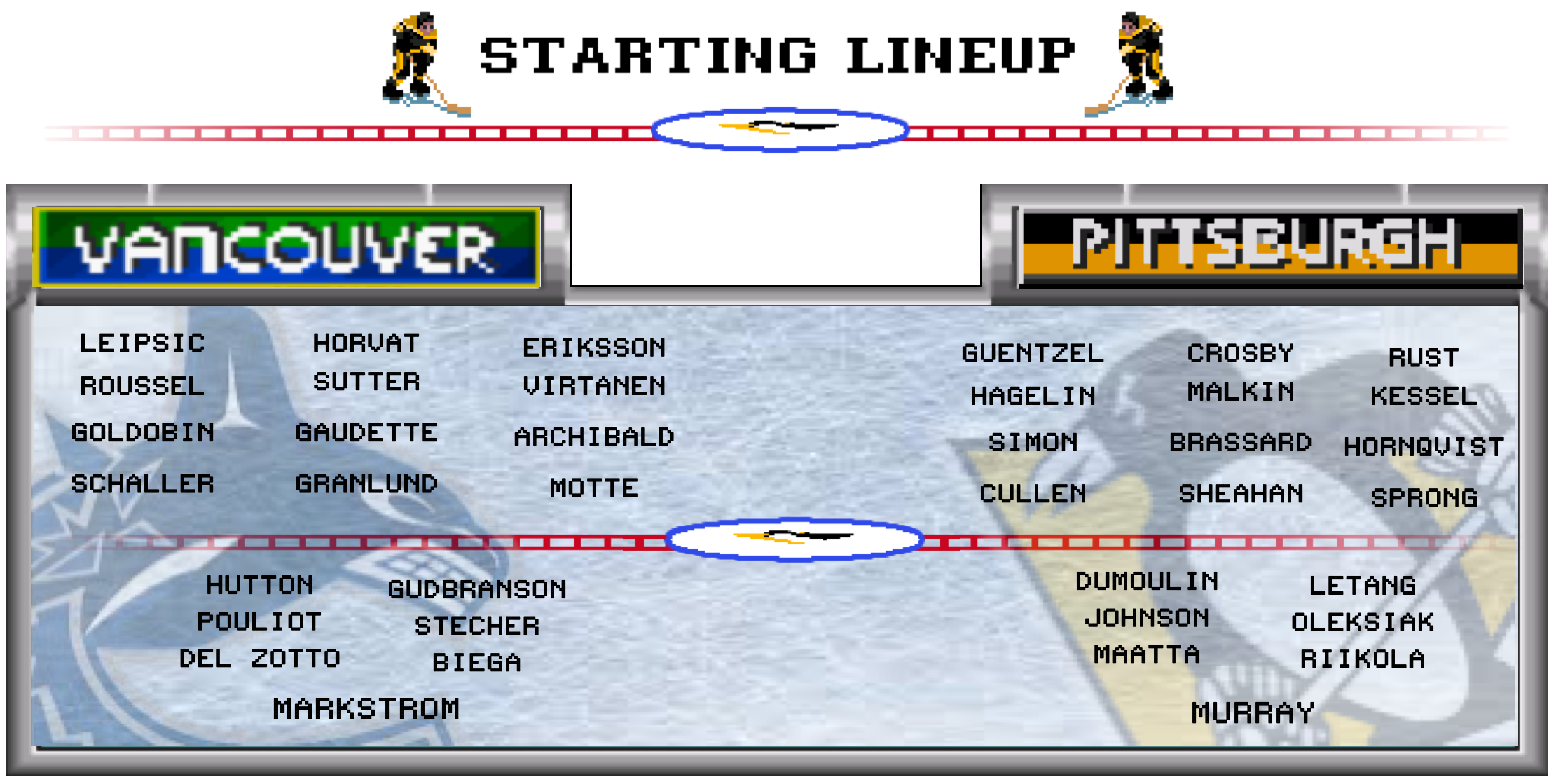 Vancouver is in worse shape health-wise since the two teams met last eleven days ago.  They were without Elias Pettersson, Jay Beagle, and Thatcher Demko then and they may still be tonight, and tonight they may also be without Sven Baertschi, Brock Boeser, Alexander Edler, and Chris Tanev.  That is a substantial chunk of the Canucks’ offense and defense on the shelf, so the Penguins will hope to take advantage of Vancouver’s shallower bench while the best of the Penguins are coming into this game hot. 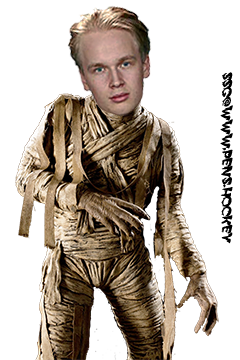 IR is a bith

It’s never a good sign that the Penguins are the last to start on the day’s schedule.  We won’t see another start later than 8PM ET until November 28.

BIG FINISH TONIGHT…LET’S DO THIS

After I finished writing this post, I learned of the mass shooting at the Tree of Life Synagogue in the Squirrel Hill neighborhood of Pittsburgh. I am not a resident of Pittsburgh or even Pennsylvania, but my heart is with the Penguins and so it is the city in the wake of today’s terrible event.  On behalf of my fellow staff members, and as much as it has become a cliché in our country, I want to send our best wishes, condolences, thoughts, and prayers to everyone affected by this tragedy, and it is my sincere hope that we all can work towards a future where this sort of violence never happens again.