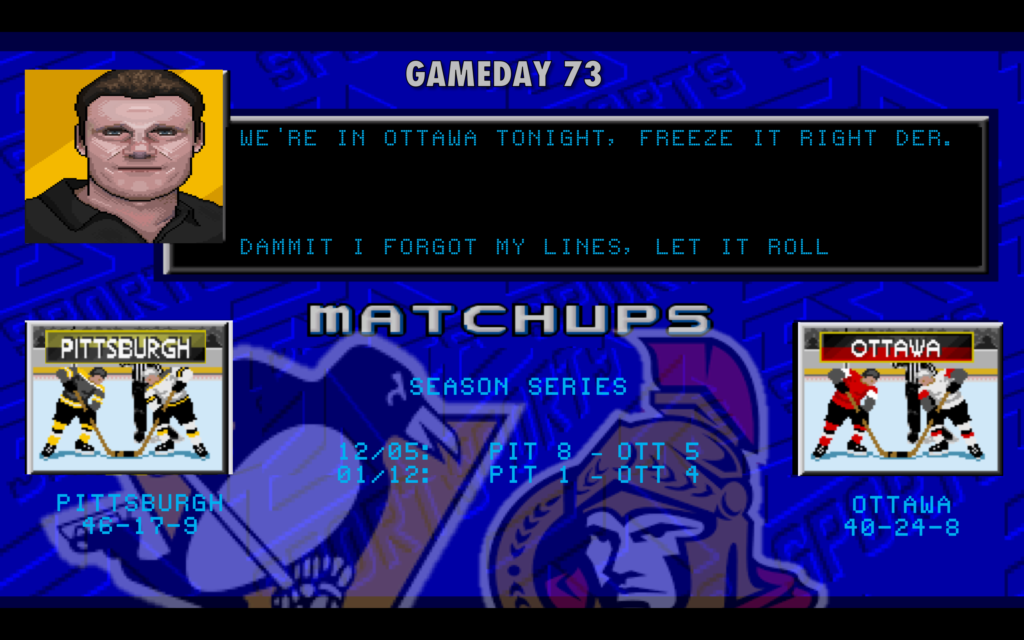 With ten games remaining on their schedule, the Pittsburgh Penguins have clinched their franchise record-tying eleventh-straight postseason berth.  Given that the Penguins hadn’t seen much roster turnover after winning the Cup last summer, it stood to reason that, as long as they stayed healthy, they ought to be in good shape to follow up their championship campaign with another strong regular season.  Sure enough, here the Penguins are, fighting tooth and nail with their peers in Columbus and Washington for first place in the Metropolitan division, the Eastern Conference, and the National Hockey League.

And yet, the biggest news to come out of their 3-1 win against the Sabres wasn’t Sidney Crosby’s outrageous, one-handed-backhanded-game-winning power-play goal, his broken teeth, or his malicious slash to Ryan O’Reilly’s groin, but the loss of another one of his linemates to injury: Jake Guentzel, blindsided by Sabres defenseman Rasmus Ristolainen, will be out of the lineup while he recovers from a concussion.  The list of players on Pittsburgh’s injury report would constitute a pretty formidable lineup, but more to the point the injured constitute almost half of the Penguins’ typical lineup when healthy.  As much as we can cross our fingers and toes to hope that the Penguins don’t suffer any more injuries, we also have to hope that those who are injured will be back in action sooner than the playoffs.  Unfortunately, there’s no way of knowing.

You ready to carry this team again, Weiner eater? You bet your pig fuckin’ beard.

And so the Penguins begin the last ten games of the regular season on the road, against an Ottawa Senators team which is in a dogfight with the Montreal Canadiens for the Atlantic division lead.  The Senators have worked hard all season to maintain pace with their division rivals, and only within the last few weeks have they been able to break away from Boston and Toronto and solidify their playoff hopes.  After tonight, Ottawa heads out on a five-game road trip, starting with a crucial game against the Canadiens, and depending on how tonight goes it could be to tie or overtake Montreal in the standings.  They will certainly be motivated to win at home against Pittsburgh.

Here are the most positive things I can say for the Penguins lineup right now:

It’s going to be a jerky end to the regular season, so let’s buckle up.

I don’t care if we’ve used this before, it needs to be said again. The Senators still have Bobby Ryan, who was considered to be good enough to earn a 7.25 million dollar contract that expires in SIX YEARS. Ryan is currently tearing it up with 12 goals and 12 assists, which comes in at the discount of $302,083.33 per point. Ryan is the highest paid player on the roster (yes, more than Karlsson, it is true), and is 10th on the team in points. Sitting back, collecting that money and watching people that make half what you make play better hockey than you is a pretty sweet gig Bobby. 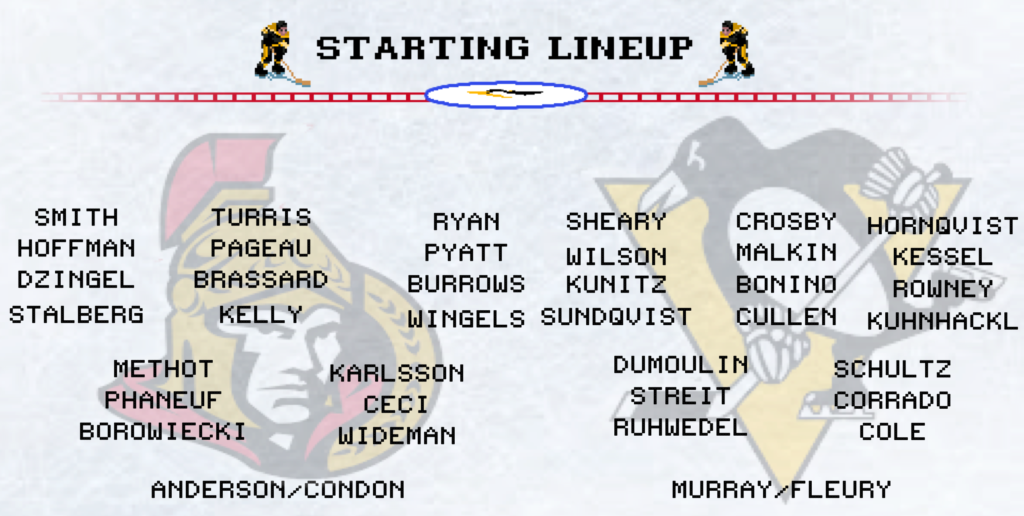 We are riding the assumption that Malkin returns tonight since he was only out for rest and nothing serious. If that is the case then this lineup should be pretty close to what we get tonight. Frankie Corrado was good enough for a second look in my opinion, but they may go with Gaunce in that spot as well. The Pens play again tomorrow night against the Islanders, if it were my call I’d start Fleury in this one and save Murray for the more accurate Islanders. As for Ottawa Matt Hoffman always seems to score against the Penguins, so maybe they should match him up a little better. The difference in this game will be who Sullivan is able to match up with the Borowiecki-Wideman line because that is where the Penguins take care of business. Even with the injuries the Penguins are better on paper than the Senators, Sad!

I always forget the Senators have Phaneuf. I would make a witty joke about Dion, but he handles that himself.

It’s the last game of the season against this team… we should probably wish the good folks over at senspolitechirp good luck in the upcoming playoffs, whatever you do make sure you are polite, hold the door, remember your yes sirs yes ma’ams, don’t insult their mothers… you know the good clean trash talk. If you are a member of Senschirp coming here, just be warned, we still have our testicles attached and can handle a mom joke or two, just ask yours.

And now for some incredible nightmare fuel supplied by the man himself:

10 games to go baby, it’s that time of year again, let’s fucking do it boys!