It looks like Consol Energy Center is being renamed to PPG paints arena? 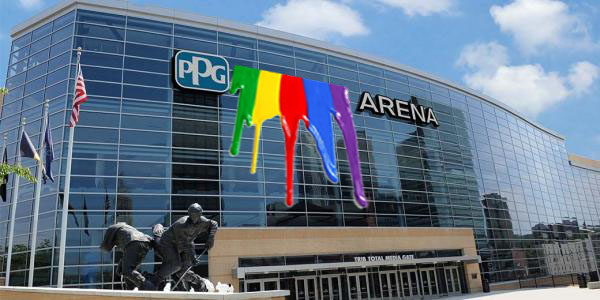 PPG Paints Arena is already on the ice #WTAE pic.twitter.com/hSyDInoTKb

I had to look this up because I don’t watch the news much, certainly never WTAE, and I had a really hard time believing “Bob Mayo” was an actual person and not ThePensBlog coming out of retirement to troll the internet.

It took me two years to learn how to pronounce “Consol” right without saying “council” or “console” and they pull this on me? As long as we can come up with a cool nickname for it, because there’s no fucking way we’re saying the seven syllable “PPG Paints Arena”.

Rorabaugh has a thought for another name:

Jagr is still around, and this is what he’s working on

Keep up the good work.

Voracek, despite his hideous jersey, had a remarkable shift last night.

Speaking of the Flyers, Bryzgalov is still one of my favorite goalies.

Spot the flyers d-man in this picture.😜 pic.twitter.com/AcXUq6pCSu

If those are the lines in the next pre-season game, I may recommend watching it over re-runs of Wheel of Fortune and CSI:SVU Vegas/Los Angeles/Miami/Toronto/Missisaugua