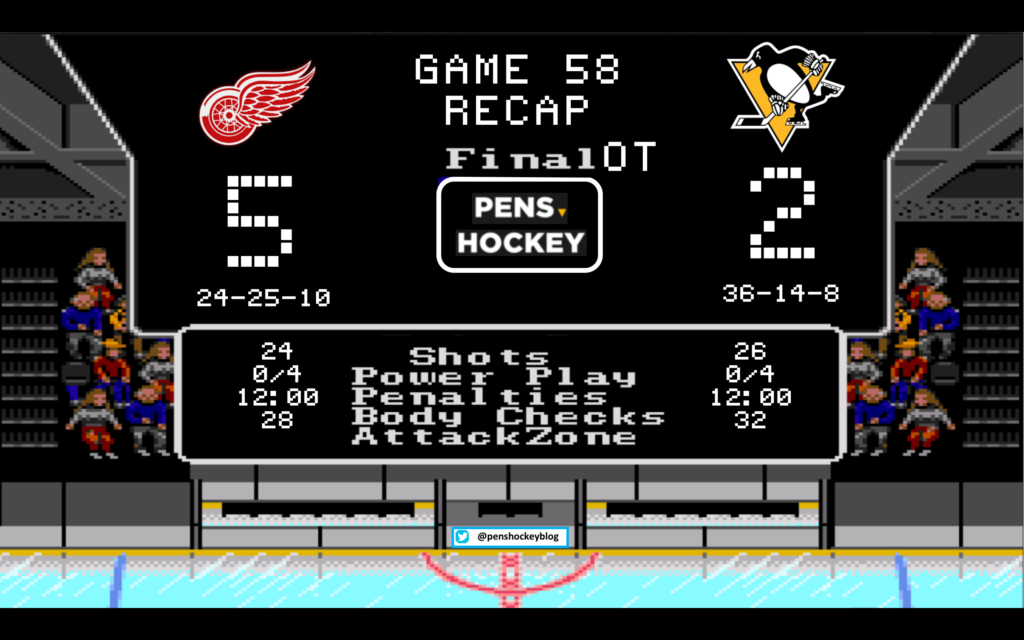 Click if you really want to look at these stats

Imagine that your company sent you a memo today saying there was an office party this Sunday and that the annoying person with like 10 cats will be hosting it. You wouldn’t want to be the only person not there so you show up, and you become a ghost of your usual self hoping you can skim through the party cordially but with the smallest amount of effort.

This was the 3rd game in 4 days for the Penguins, with the other two being more physical than games in February generally are. It was also a day game on NBC, which the Penguins are 2-94 in. I haven’t confirmed that stat, but Bob Grove said it was close enough.

Before the game Sidney Crosby was given some new gifts both by his teammates and then by his landlord.

Congratulations Sid. We look forward to the next 1,000! #Crosby1000 pic.twitter.com/0iuqGKlJhN

The game started out as sluggish as you would expect for an afternoon game, but it was obvious the Red Wings weren’t showing too much lag from their overtime win the day before. 8 minutes in what to you know, it’s Trevor Daley having to defend another 2 on 1.

Why does this footage look so shitty if it is from the official provider of NHL copyrighted footage? Trevor Daley is not having a good year folks, and unfortunately for him he lost his scapegoat Maatta.

Sorry for the grittiness of this image, I took it from this great Ryan Wilson post. Here are some more charts on Daley’s WOWY scores.

What this is saying is all but Justin Schultz plays better without Daley than with Daley, and that is mostly due to a limited amount of minutes with Daley. Not a good look for the guy. Our whipping of Olli Maatta has masked this a lot.

The Penguins would be short handed and deserved to be trailing by more than 1 at this point, but even on an off day this team is still a threat:

Kuhnhack-goal is pretty lame. My boy Kuhnhackl with another point though.

The celebrations would be short lived because Steve Ott reminded us all he is still in the league. He somehow managed to get 2 hits in and then bury a backhander.

Kris Letang was pretty jammed up about this hit, and started mouthing to the officials afterwards, but I’m not sure what his problem was. 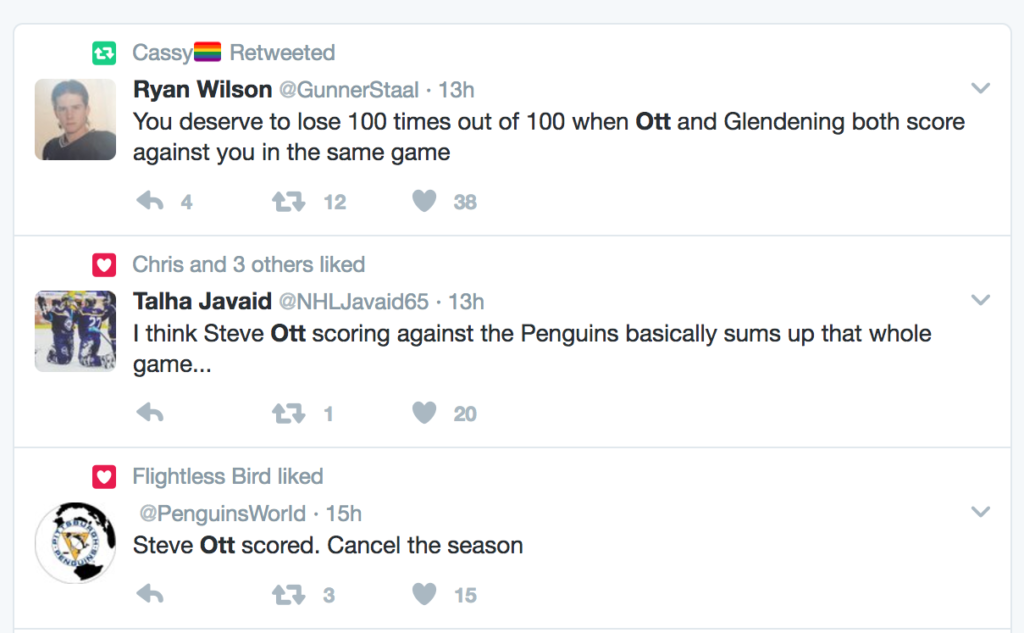 Thankfully for the Pens the period would end there.

Apparently both teams took this period off. It was a goaltenders duel this period, with Murray and Mrazek both making some crazy good saves.

Mrazek out here having himself a game pic.twitter.com/Ol3Eb3sh4d

Less than a minute into the period Tomas Tatar would deflate the Pens erection faster than thinking about your mom.

Zetterberg will never get the credit he deserves. 2 minutes after that it was Thomas Vanek, who like Steve Ott is apparently still in the NHL.

Not a good period for Matt Murray at all, but to be fair it wasn’t a good period for anyone in black and gold. Not sure why these gifs look like there is some kind of special effect on them, but something tells me it is NBC trying to prevent gifs or something. 7 seconds after the Vanek goal the captain would put one in wiht his new golden stick.

Sidney Crosby, because of course. pic.twitter.com/WvJpbrSVUH

7 seconds has to be one of the fastest response goals in recent memory. Unfortunately for the Pens it was their only response and has time dwindled down some guy named Luke Glendening would score on the empty net to seal it up.