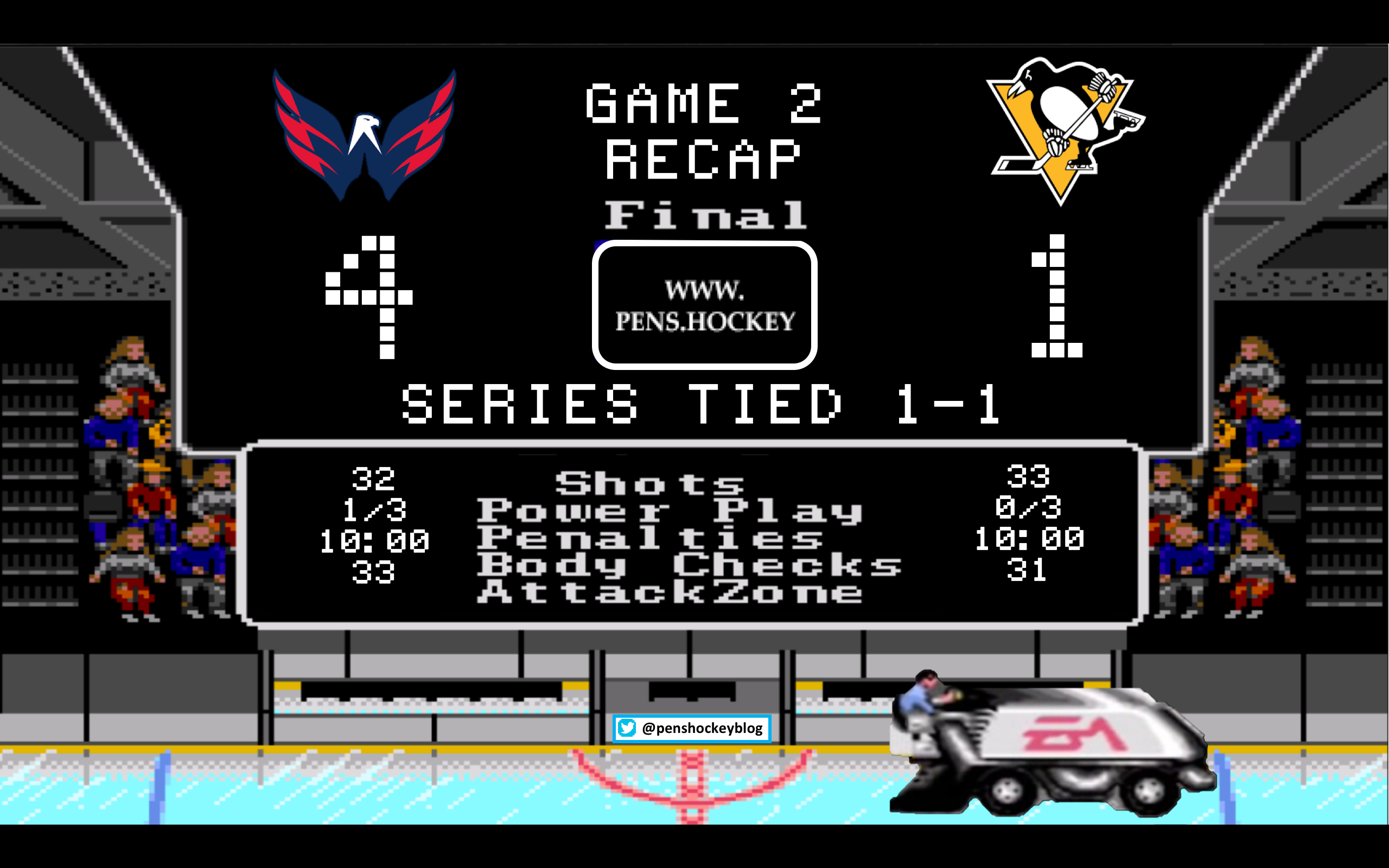 Life, like this article, and the Penguins lineup for the last two games, is like a box of chocolates: sometimes someone else ate all the good chocolates so you’re stuck having to cram the rest of them in your sullen-looking face.  Circumstances have conspired against us today, so this article will be authored by committee. With Evgeni Malkin and Carl Hagelin out of the Penguins’ lineup for a second straight game, all the Capitals had to do was not be as bad as they were in Game 1.  After all, losing Game 2 would have been disastrous for the Capitals’ chances and psyche, so they really needed the win.  Of course, there was no way they could win without having help from the refs, or without taking out a key Penguin (Brian Dumoulin), but that’s Washington Capitals hockey for you.  Hopefully Dumoulin’s injury is not severe, but it’s not like the Capitals will be risking a key player in return (Tom “Only A First Liner For Washington” Wilson).

The Caps put a quick damper on the Penguins chances to 3===Delieve within the first two minutes of the period. Whatever.

To say Connolly wasn’t interfering with Murray here is a joke. Then what was he doing? To claim it was “several seconds beforehand” is also a joke, since it was actually ~1 second beforehand. Sully challenged it. Refs say “no”, Pens get all the calls. Nevertheless, this little rascal scored.

lol, Penguins marketing team acting as if Blur – Song 2 is some sort of original goal song.

2 minutes into the period. Connolly is officially in Murray’s head.

Letang scores. No one cares, because all anyone is going to talk about for the next few days are the following two things:

This, Wilson is looking at a suspension (most likely)

If you fucking dare say it was a goal you’ll have hundreds of Neil deGrasse Tyson style physics experts lecturing you about AnGLeS.

Now we know that the thing you do when you’re driving and you move your head around to see if the fuel gauge is really at empty is called the “Parallax effect” and this effect, which you would think would be incredibly relevant for every icing and offside play, has come into play for the second time in NHL history.

It’s 2018. We have drones delivering packages and self-driving cars, but we can’t put a chip inside of a puck.

The puck was over the line. Connolly interfered with Murray. If the refs had any consistency at all this game would have gone into OT. But it didn’t.

Disclaimer: I am Brendan. Take all of this with a grain of salt, unlike Andy Sutton, I’m not an expert