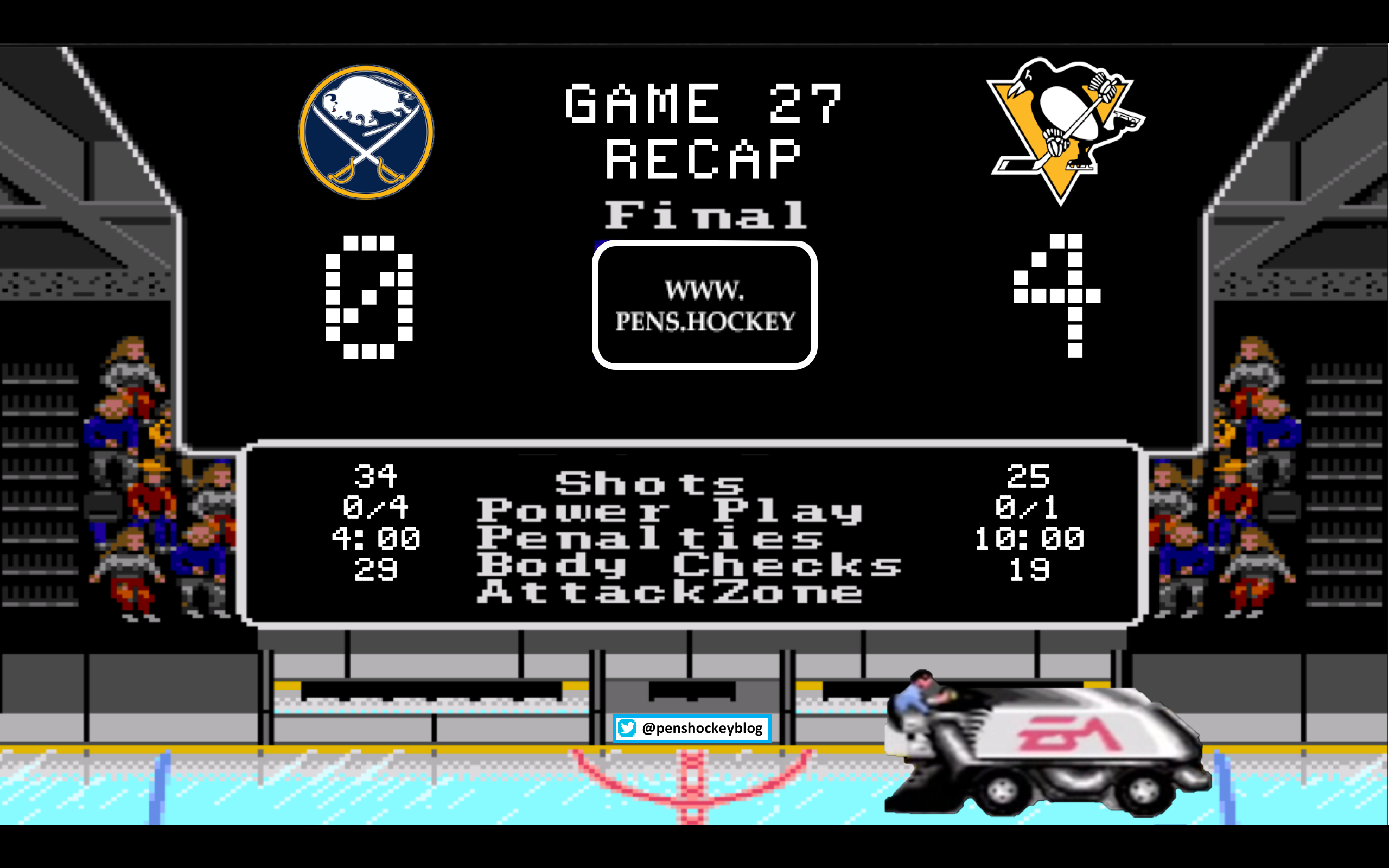 The Penguins have started playing hockey in a pattern that is more recognizable as the Penguins. Granted this didn’t start with the win in Tampa, it has been forming throughout the last three weeks and finally things are falling into place and bounces are finally going the right direction. Of course wins against Philadelphia and Buffalo should hardly be considered season changing moments, though wins in games that you should win can certainly be classified as great for the overall team morale. We are into December now, and wouldn’t you know it, the Penguins look like a different team than they did in October?

3 minutes into the game the Sabres were trying to do something but they ended up just doing what they always do by shooting themselves in the foot. First a shot from the point was blocked by Tom Kühnhackl, who properly accelerated to gain a breakaway. Then the Buffalo defense decided they have less faith in Robin Lehner stopping Kühnhackl than Kühnhackl scoring and hooked him up. Tommy Tutone was awarded a penalty shot…

Pretty straight forward here, he looked at his spot the whole way and neither shielded it nor tried to hide it, and honestly I think that’s what made Lehner overthink the shot. You have to feel good to see Kühnhackl finally get on the board this year, unfortunately he would not score 4 more goals 4 different ways in this game to complete the Lemieux Trick.

The goal didn’t really result in a change of play from the Sabres because honestly they are completely lifeless under head coach Phil Housley. Three minutes after the Kühnhackl goal the Sabres decided to put another one on the board for the Penguins by giving Sidney Crosby the biscuit right in the lane.

Don’t for one second overlook the incredible defensive decision by Ian Cole to pinch down and poke the puck deeper into the zone, Cole could’ve easily retreated but knowing two forwards were in the zone he took the chance. Crosby just determined to get to this puck first, and uhhh… don’t look now but the man who was dead two weeks ago is now 3 points back from top 10 in the league, again. 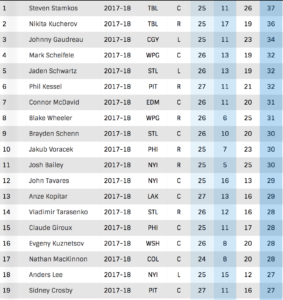 The goal basically broke whatever spirit Buffalo had, the arena was as lively as the Capitals Stanley Cup parade and man did it feel good to know the Penguins were finally controlling a game. As time ticked down the Pens kept swarming the net, then the insurance salesman made an incredible play. Evgeni Malkin carried the puck up the ice and after crossing the blueline tossed a knee-high lob pass to Jake Guentzel, who knocked the knee-high puck out of midair down to his stick and protected it from the other defenders while not breaking stride. Guentzel carried the puck powerfully behind the net and then notched his 9th goal in his last 12 games.

Just an unreal play to knock the puck out of midair like that, and it shows the trust Geno has in Jake to know he can send him a puck like that.

Rumor is Donald Trump is jealous of Guentzels yuge hands. Unreal play, get the hell out of here, and that’s what the Sabres did,

The second period was all about not having a brain fart and making sure Buffalo continues to feel worthless. The Penguins did just that, and Tristan Jarry was having himself a night. I felt like Sullivan took the opportunity of a big first period lead to challenge his defense. Often in junior play if our team had a big lead our coach would say “only [player name] can score” to make us work on our passing, or “if they get less than 8 shots this period no practice tomorrow,” and with the team needing defensive work it would make sense for him to say something that challenges the defense in a similar way.

Regardless of my unfounded speculation the Penguins defense was stellar, and in the final minute the offense wanted to have fun too:

Tristan Jarry shut the door on backup goaltender speculation. Rumor is Anti Niemi let in 4 goals while watching the game. Nothing else happened in the third other than Evander Kane being a dick and Ryan Reaves being pointless. Now we get to do it all over tonight! 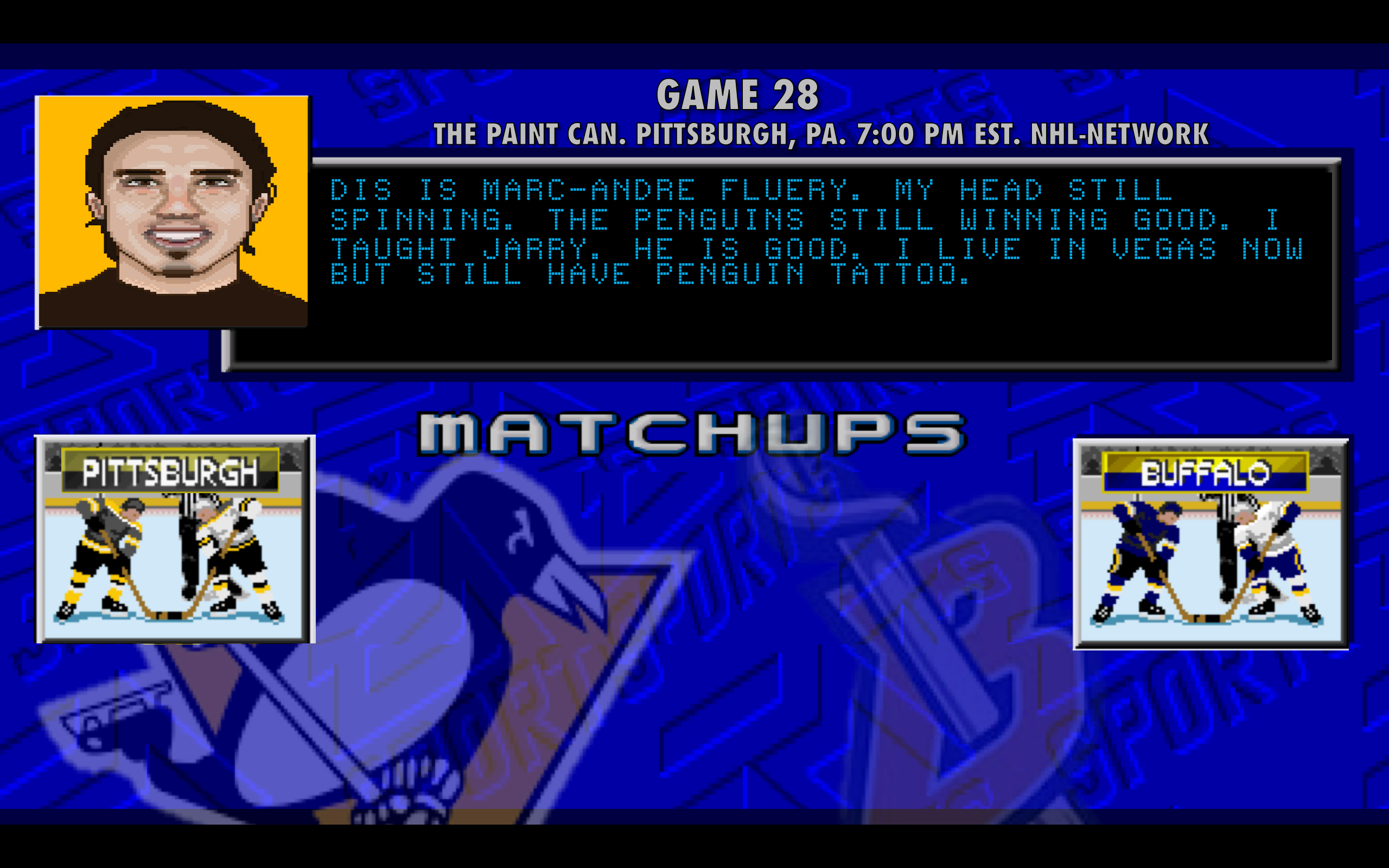 The Pittsburgh Penguins return home to complete the second game of their back-to-back, home-and-home set with the Sabres.  Unless something happened between then and now, there will be little difference between tonight’s matchup and yesterday’s, so I’ll be filling in today’s space with a retrospective of the first third of the regular season.

I find it more poetic to consider the regular season to be three roughly equal parts, seeing how a single hockey game is broken up into three periods.  Looking at it this way, the season is broken up as such:

For the Penguins, the “first period” concluded yesterday, and it’s been an interesting start to say the least.  There aren’t a lot of obvious positives, but let’s see what good news we can drag up here:

Alright, let’s get the bad news out of the way:

Let’s look at the big picture.  At this point last season, the Penguins had 37 points in the standings, so this year’s team is a little disappointing in that regard.  But also consider that each UFA the Penguins had in the fold at this point last season – namely, Nick Bonino, Matt Cullen, Trevor Daley, and Chris Kunitz – are all plying their trades elsewhere this season, leaving depth gaps in terms of skill, production, leadership, and experience that cannot be replaced with just some different bodies.  Mike Sullivan can lean on three forward lines for a time, but in the next seven weeks the Penguins have to start shoring up their forward depth.  I have a feeling that if the Penguins can get back to giving all of their fourth-liners ten-plus minutes a night, all that ails them will be cured.  (Last night, only Reaves was under 10 minutes.)

There’s still a lot to be positive about with the state of the Penguins right now.  Even though Matt Murray is out with an injury, let’s be grateful that Antti Niemi is nowhere to be seen in a Penguins jersey.  Much of the defense is still in good shape, they just need more support.  And the forwards who are out on the ice on a regular basis are doing well enough.  It will likely take some tinkering (and perhaps a surprising trade, with or without Ian Cole) to steer the Penguins in the right direction.  The question now becomes: just how much effort will Jim Rutherford put into making this team a more serious contender for the Cup this spring? 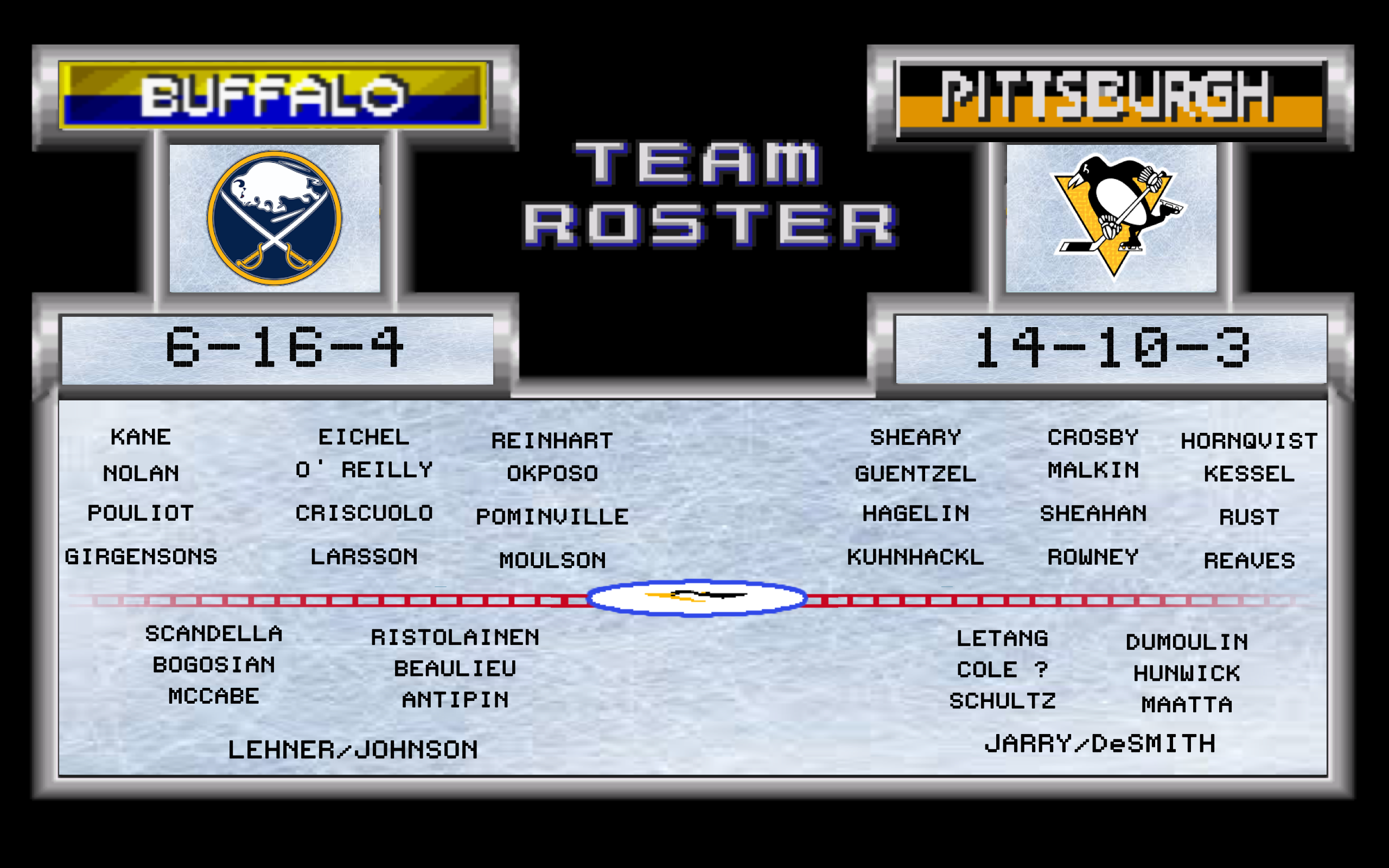