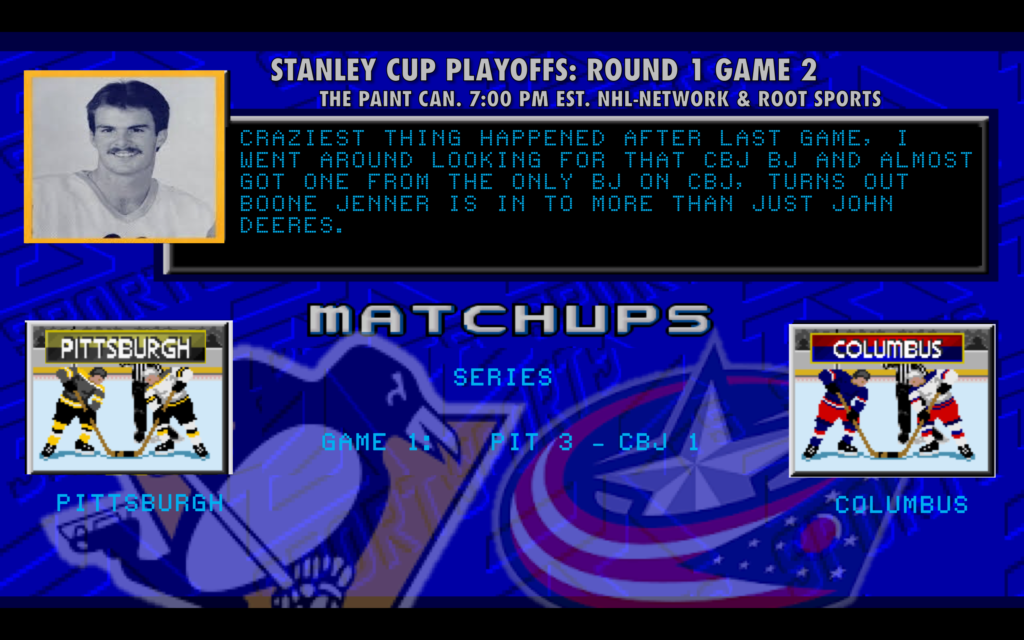 Even before Game 1 began, the expectation of the Columbus Blue Jackets was that they would be focusing mainly on making the Pittsburgh Penguins pay physically for every inch of ice Pittsburgh had to earn.  By doing so, they hoped to create turnovers and glean some scoring chances.  At the very least, the hope would be to make the Penguins either play tentatively instead of decisively or draw the Penguins into the same level of physicality.

The first period had been Columbus’ bread-and-butter this season, with a goal differential of +29 and 28 wins, second only to the Washington Capitals.  For one period, the Blue Jackets looked to be steering the game in their direction, outshooting the Penguins 16-3 and coercing the Penguins into nearly drawing level on hits, 23-22.  Thanks to some important goaltending from Marc-Andre Fleury, the game remained scoreless, but everyone knew that the key to Pittsburgh winning would be to stay out of the physical game and beat the Blue Jackets with skill. Unfortunately for Columbus, the second period has been Pittsburgh’s bread-and-butter, with a League-leading 102 goals in the second period to go with a third-best .949 record when leading after two.  Sure enough, the second period started and the Blue Jackets did not come out of the locker room with the same tenacity they exhibited in the first period.  With barely a minute gone Malkin gets the zone entry, dishes to Kessel who draws Jack Johnson out of the slot and tees it up with his skate for Rust who doesn’t miss, 1-0 Pittsburgh.  Columbus would spend the rest of the period chasing the Penguins around, to no avail, as the Penguins tallied another two goals on the way to a 3-1 victory.  Columbus ended up outhitting (49-35) and outshooting (32-29) the Penguins, but the second period really told the story as the game turned in Pittsburgh’s direction (hits: 14-9 Columbus; shots: 16-4 Pittsburgh).

Pittsburgh was successful in Game 1 largely because they were able to withstand the Blue Jackets’ pressure in the first period and not fall into the physicality trap that Columbus needs so desperately for Pittsburgh to fall into.  In years past, being hit a lot might have drawn the Penguins into undisciplined play, but this veteran team is less likely to succumb to such shenanigans.  It’ll be difficult for Columbus to continue playing a physical game without getting the kinds of turnovers like the one that led to their goal in the third period.

Speaking of that turnover, it was at the behest of sloppy play from the Penguins’ forwards:

The Penguins already had a three goal lead with 7:19 to go, so attempting to seize on the pinching Anderson backfired and forced the Penguins to play the rest of the third period basically in their own end.

It will be interesting to see how, and if, the Blue Jackets adjust for Game 2.  What’s most likely is that head coach John Tortorella and his staff simply make matchup changes. Perhaps they won’t need to do anything; if they are able to score first and break through on Fleury, then perhaps the Penguins will have a tougher time recovering.  In any event, I wouldn’t anticipate the Blue Jackets deviating from their “hit first” mentality.

The good news is the shock of no Murray won’t happen again. The bad news is it is the playoffs and Sullivan confirming a day ago that Fleury starts tonight would be the first time all year he’s given us the starter so early. The Blue Jackets went with Harrington on defense in the first one but after getting embarrassed by Kessel they most likely sent him back to Toronto. Everything else should be pretty close to game 1 lineup-wise as both coaches will try to play the perfect match-up game. Let’s keep this thing rolling boys!

It was looking good for the Toronto Maple Leafs…for half a period…but Braden Holtby turned aside the remaining 26 shots Toronto took last night, including nine in the 25:15 starting in the third until Tom Wilson broke the tie to win the game for Washington.  Justin Williams brought the Capitals back from their 0-2 deficit, adding to his legacy as a clutch playoff performer.  Game 2 is Saturday in Washington.

Viktor Arvidsson scored the only goal at 7:52 of the first period, and Pekka Rinne notched his first playoff shutout against the Chicago Blackhawks to give the Nashville Predators an all-important Game 1 win on the road.  The win is just Rinne’s fifth in 13 tries against the Blackhawks in the playoffs, and it may help the Predators gain confidence against the best team in the Western Conference.  Chicago hosts Game 2 on Saturday.

Penalties galore in Anaheim last night, as both teams combined to go 3/12 on the power play, but it was Jakob Silfverberg’s power-play goal at 17:47 of the third period that was the difference for the Anaheim Ducks, downing the Calgary Flames 3-2.  Brian Elliot made 38 saves on 41 shots for the Flames, but he couldn’t hold the door open; Pittsburgh native (didn’t ya know) John Gibson made 30 saves on 32 shots.  Game 2 is Saturday in Anaheim.