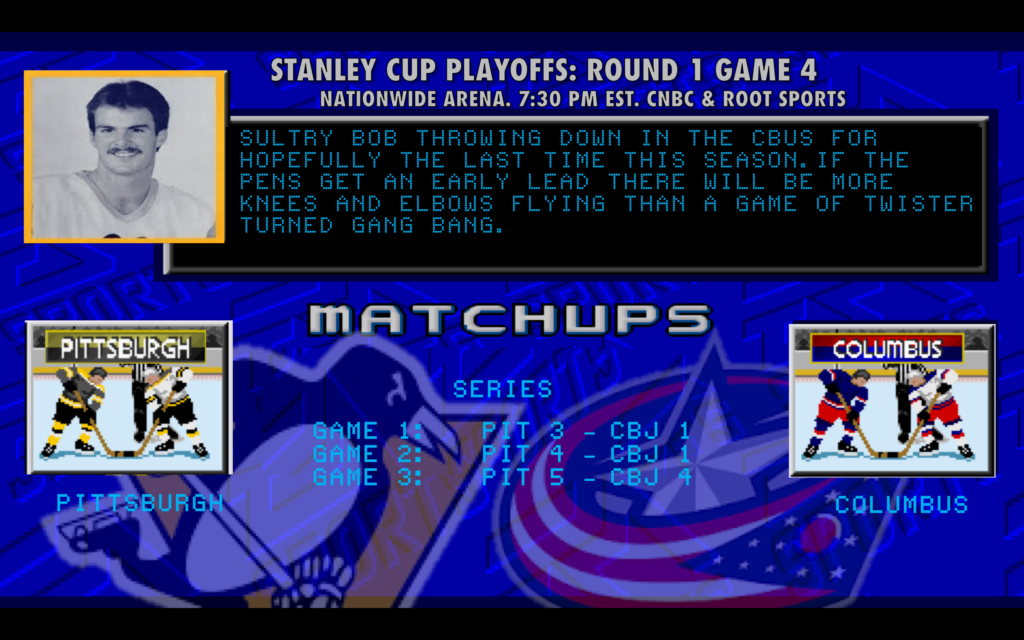 For the Columbus Blue Jackets and their fans, the dreams started sometime before their sixteen-game winning streak that began after Thanksgiving and ended in the second week of January.  Before the streak began, they only had 26 points in the standings, but that was already good enough to have a 70% chance of making the playoffs.  After the streak, they had doubled their points in the standings to 58, already more than half the points they finished with (108) in just 43% of the season.  They were already a lock to make the playoffs in January, and clinched their berth in the playoffs in mid-March with eleven games to go.

Many teams who clinch that early will take their foot off the gas.  The Blue Jackets ended the season with fifty wins, but went 3-7-1 as goalie Sergei Bobrovsky lost his last four decisions with save percentages of 0.913, 0.900, 0.852, and 0.833.  It did not bode well, but still the dreams of winning the Cup and proving yourselves against the best teams in the East persisted.  The Blue Jackets were one of many young and hungry teams that wanted to prove that they could hang with the big boys and even take them down.  Down 0-2 going into Game 3 at home, the Blue Jackets and their fans were determined to erase the deficit in loud, passionate, emphatic fashion.

As we have learned from our eleven straight years of playoff runs, if you let off the gas for a second, it could be the end of your playoff dreams.  Such was the case in Sunday’s epic Game 3 wherein the big boys of this Penguins iteration, Sidney Crosby and Evgeni Malkin, made Columbus pay for all of their mistakes.  While Columbus raced out to a 3-1 lead in six minutes ten seconds, it was the Penguins who showed the Blue Jackets what it means to be a veteran hockey team by slowly digging away at the lead until they had a lead of their own, courtesy of Jake Guentzel’s second goal. 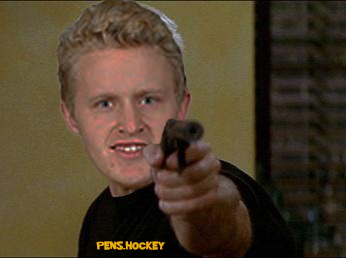 The man in the penalty box for Columbus when Guentzel scored was Brandon Dubinsky, and he tied the game minutes later and pushed the game into overtime.  That’s when the Penguins took advantage of the Blue Jackets letting off the gas for just a few mere seconds. 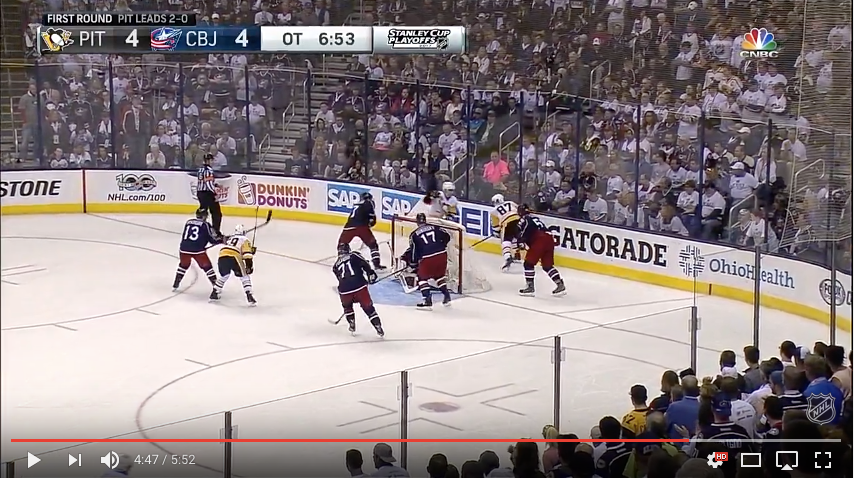 If you don’t want to give Bobrovsky the benefit of the doubt, that’s all six Blue Jackets watching Sidney Crosby, including poor Denis Savard who doesn’t know whether to cry or wind his watch.  Conor Sheary was giving Sid cover, and Jake Guentzel makes three Penguins below the hash-marks vs. Columbus’ five.  Guentzel was idly watched by Nick Foligno while Cam Atkinson slid to the outside on Guentzel, inexplicably giving Guentzel the inside position and prime real estate for scoring a goal.  The immediate aftermath: 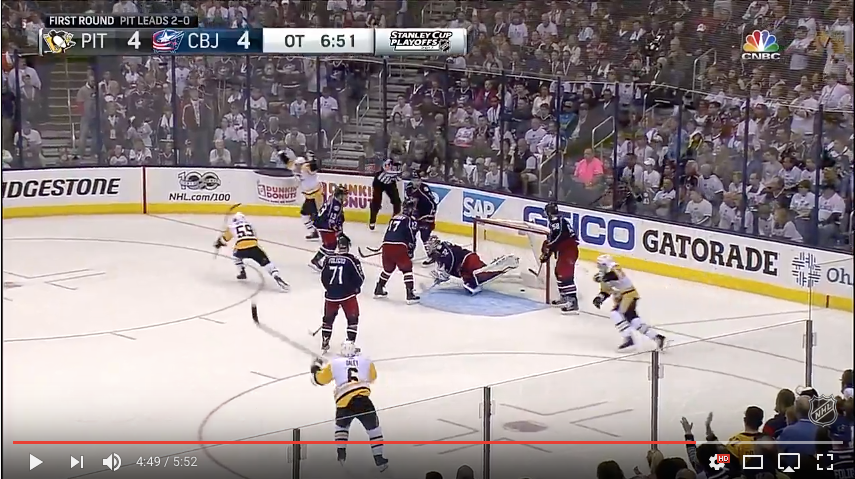 It’s been a long time since Penguins fans were able to think about bringing brooms to a playoff game.  The last successful sweep the Penguins performed on a playoff opponent was during their second-most-recent Cup run in 2009, on the road in Carolina in the Eastern Conference Finals.  The year before they actually had three chances at a sweep, doing so against Ottawa in the Conference Quarterfinals then against the Rangers and Flyers in the next two rounds.  Before that the Penguins hadn’t swept a team since the Cup-winning 1991-92 season, doing so against both the Bruins and the Blackhawks.  (Interesting factoid: the Penguins have never swept a series that ended in Pittsburgh.)

You can’t say the Blue Jackets didn’t put forth their best effort in Game 3, and that may perhaps be why they and their fans were so disconsolate when Guentzel scored his hat trick/game-winning/legend-making goal.  They might have known then that that was the moment that ended their Stanley Cup dreams.  They might have known that was possibly the last time in this series that their team might have made things interesting against a team that has beaten them at nearly every turn.  And yet they could still go home thinking that tonight’s Game 4 might not be the last nail in the coffin.  But Columbus has to find something else in their repertoire because relying on Sergei Bobrovsky to steal them a game has been an ineffective strategy to this point.  We’ll see tonight if they have anything left, or if they’ll be swept away at the hands of a team that is simply dreaming bigger. 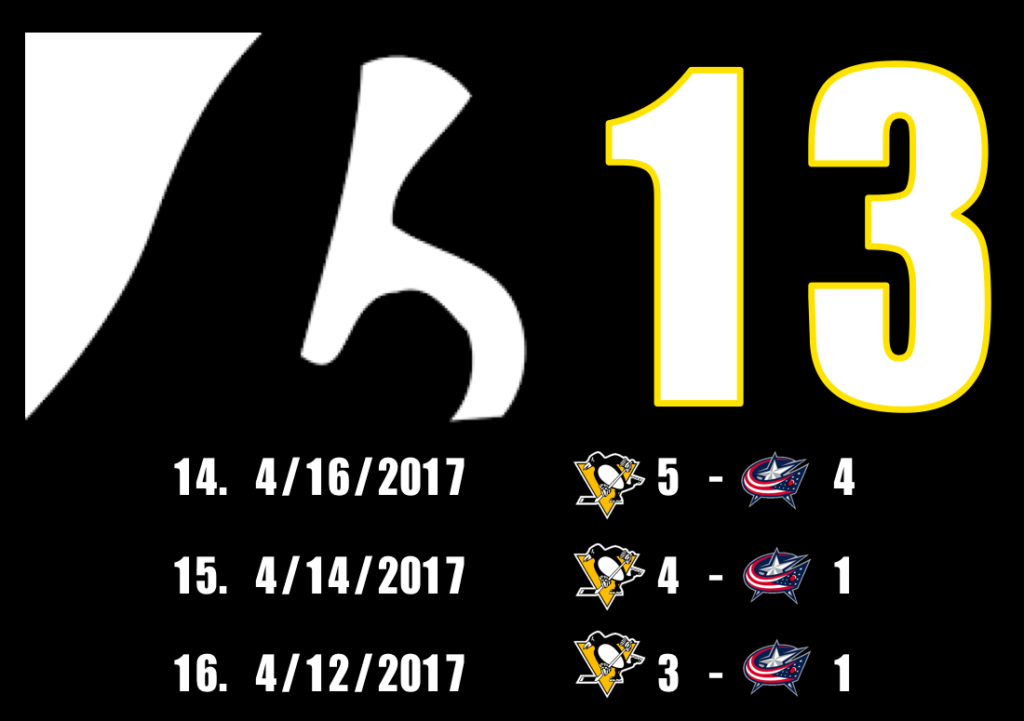 Tyler Bozak scored a power-play game-winning goal 1:37 into the first overtime to give Toronto a 4-3 win and a 2-1 series lead over the Washington Capitals.  Lars Eller high-sticked Zach Hyman with 16 seconds left in the third period to set up the power-play.  Washington has leads of 2-0 and 3-1, but they were unable to shake the Maple Leafs who have put the fear of God in the Capitals and their fans.  Game 4 is in Toronto tomorrow.

Bobby Ryan also scored a power-play game-winning goal in overtime, 5:43 into the first OT as the Senators stole Game 3 away from the hosting Bruins.  Ottawa was up 3-0 after Mike Hoffman scored 3:42 into the second period, but Boston drew level before the period ended.  Riley Nash was the goat for Boston, as he was in the box for punching Ryan after being checked into the boards.  It was apparently controversial?  That’s the playoffs for you.  Boston hosts Game 4 tomorrow night.

The number one seed in the Western Conference is on the brink of elimination, as the Nashville Predators sank the Chicago Blackhawks in Game 3 on a goal from Kevin Fiala at 16:44 of the first overtime.  Chicago was up 2-0 (including Patrick Kane’s 50th career playoff goal, join the club) until Filip Forsberg broke the shutout at 4:24 in the third, then Forsberg tied then game ten minutes later.  Rinne had to make an outrageous diving stick save on a clearing attempt while the Blackhawks were shorthanded, and stopped the last 20 shots he saw for Nashville.  The Predators will have the chance to clinch the series in Game 4 on Thursday.

Calgary had a 4-1 lead heading into the last minute of the second period, but the Ducks clawed their way back and Corey Perry scored his first goal of the playoffs, an overtime game-winner to push Anaheim to the edge of advancing to the next round.  This in spite of Calgary going 3/5 on the power play, but Jonathan Bernier saved all 16 shots he saw after relieving John Gibson when the score went to 4-1 Calgary.  Anaheim can finish off the Flames with Game 4 tomorrow.

THERE CAN ONLY BE BUN

The winner of this epic battle will be ‘Officially’ announced and awarded the Pornley Cup in tomorrows Glorious H.P Recap.