With the holidays over, the holiday roster freeze over, and the Pittsburgh Penguins in the middle of their “bye week,” I felt like now would be a good time to do a trade deadline preview.

Yes, the trade deadline is at the end of next month, but if we’ve learned anything about the Penguins and general manager Jim Rutherford over the last few years, it’s that Rutherford doesn’t like waiting until the last minute to make any roster changes.  Even this season, we’ve seen trades in October (Andrey Pedan for Derrick Pouliot, and Riley Sheahan for Scott Wilson) and December (Michael Leighton for Josh Archibald and Sean Maguire, and Jamie Oleksiak for the draft pick they got with Leighton).

Unlike in the last few seasons under Rutherford, the Penguins look a little more vulnerable.  Two-time defending Stanley Cup champions, they ended up retreating in terms of depth this past offseason, particularly at forward, at the same time as the rest of their Metropolitan Division rivals are increasing their pressure in hopes of unseating the Penguins from their dominant position.  The prevailing wisdom through the first half has been that other teams have been less willing to trade with Pittsburgh, not wanting to be the team that helps Pittsburgh win another Cup.  Coincidentally, the first half of the 2017-18 season wasn’t ideal for the Penguins, with League-worsts in shooting percentage and save percentage and abysmal performance on even strength.  To their credit, the Penguins had hung around the top three of a very tough Metro Division for a time, before falling down to as low as seventh, and only recently recovering back to fifth, eight points behind the division-leading Washington Capitals.

With this uncharacteristic underperformance has come a raft of trade buzz, and as usual in these circumstances, things can get a little silly.  Pretty much everyone has already been the topic of rumors, which, in a vacuum, may be fair from the standpoint of the team looking for something to return to credibility.  That being said, pretty much everyone has performed below expectations offensively, so it’s more challenging to say who needs to go.  At the same time, when factoring in the reluctance of other teams to play ball with the Penguins (whether perceived or real), making a deal to improve the team’s depth will likely come at the cost of players who are useful or prospects who look good.  Perhaps neither sound palatable to anyone, but if the Penguins want to have a serious shot at winning their third Cup in a row, they might have to part ways with players that either benefit their present or their future.

With that in mind, I made a list of the current and active Penguins, in pairs (for no very good reason), ranked by their value to the franchise in trade.  The idea is that the guys at the top and bottom are nearly impossible to get rid of, whether they are franchise-defining legends (hint) or bottom-dwellers who the Penguins would probably have to pay someone to take off their hands.  In between are the players more likely to be traded, and as you approach the middle of the list you’re more likely to see even value for a trade. 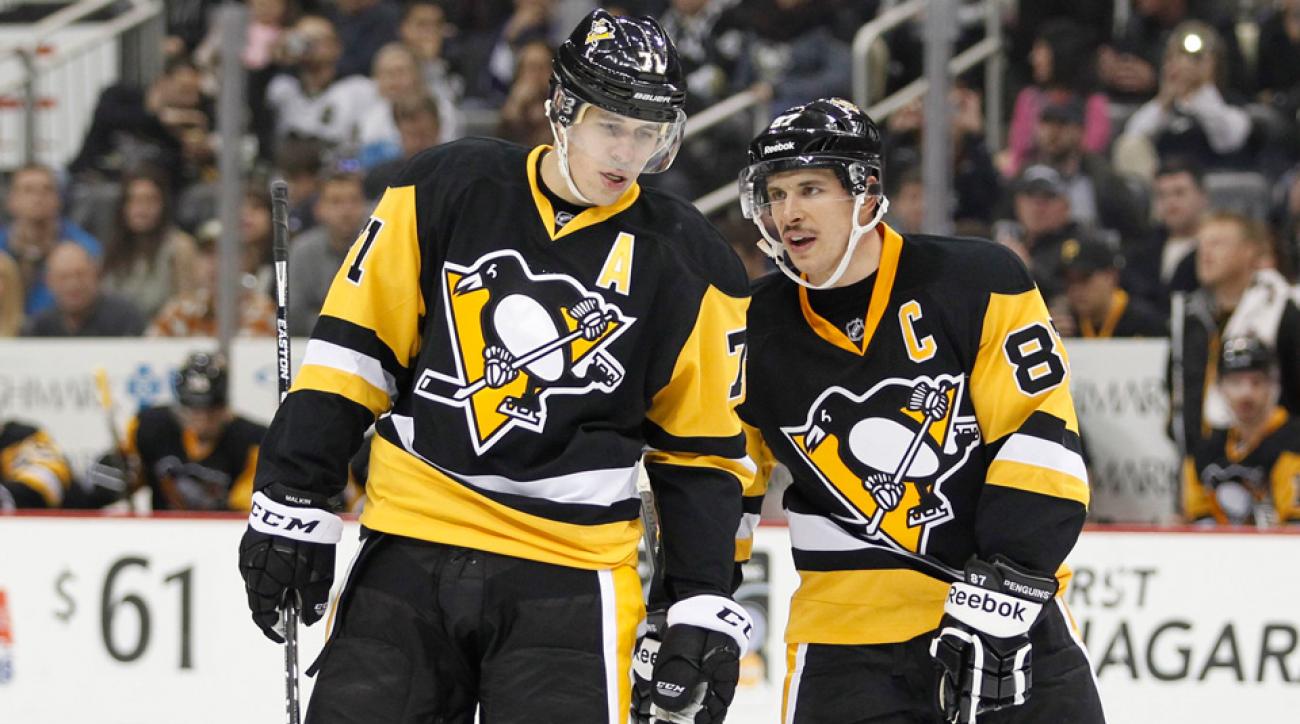 #1b and #1a: Evgeni Malkin and Sidney Crosby

The no-brainer of no-brainers, Sid and Geno are locked into Pittsburgh for this and the next four seasons (plus three years for Crosby).  They both have total no-movement clauses, so the Penguins couldn’t move them unless there were some pretty big reasons for either player to want to move on.  Maybe as they move into their mid-to-late-thirties the Penguins will start to wish they could trade them, but it’s seeming more and more that they’re never leaving Pittsburgh.   In ten years or so years, when Sid and Geno have their jersey number retirement ceremonies (not necessarily on the same night), it’ll be Guentzel wearing the captain’s C and Murray starting in goal.  At least, that’s how it should be. 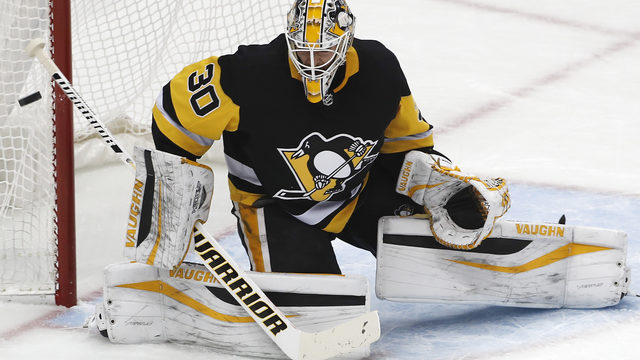 The Penguins traded Marc-Andre Fleury to make room for Murray to be the franchise goaltender for the next decade.  After all, Murray backstopped the Penguins to the last two Cups, and is on the path to being a better goaltender than Fleury was in his time in Pittsburgh.  That’s saying a lot, since Fleury holds pretty much every significant franchise goaltending record.  Murray has what it takes to eclipse those numbers.  With a shallower and longer-term goaltending prospect pool behind him, there’s basically no way the Penguins can get rid of him now.

As for Guentzel, he has had a couple brief stints centering his own line and did fine.  That’s probably the worst thing you can say about how his time in Pittsburgh has started, as he’s now attached to Crosby’s wing and has flourished in that position.  He led all skaters in goals last postseason, including five game-winners.  His shooting percentage has dipped a bit, but there are few Penguins whose hasn’t; his possession numbers have otherwise gone up.  He’s only 23 and he’s got another year on his entry-level contract.  His future is bright, and there’s not a chance he leaves Pittsburgh.

I think Määttä is the most untradable defenseman in the franchise, but his age, his team-friendly cap hit ($4.083M/yr) and certain qualms about his game make him a popular target for trade talks.  One of the big complaints with Määttä, besides his health, has been his diminished offensive output, but not only is he on track to match his great rookie season, but he’s having some of his best possession metrics as in any year.  He’s becoming a very talented two-way left-handed defenseman, and that would catch a pretty big haul if any of those trade rumors would come to fruition. Määttä’s contract starts a modified no-trade clause in 2020, so it’ll become harder for the Penguins to move him, but it would be a big surprise if they tried to move him at all as the young Finn heads into his prime. 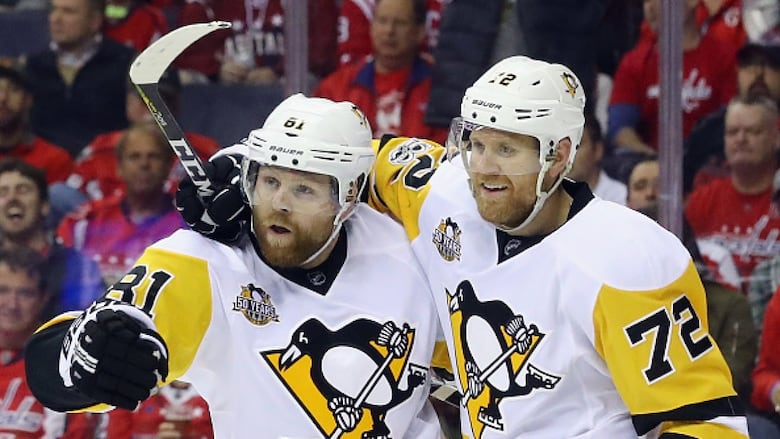 #3b and #4a: Phil Kessel and Patric Hornqvist

Kessel has been one of the best trade acquisitions of the Rutherford era, as he shook off a Toronto media fake news report that he wasn’t capable of helping a team to a Cup.  Two Cups later, and Kessel is even the points leader for the Penguins as he’s on track for one of his career-best statistical seasons.  Out of the spotlight in Toronto, Kessel has flourished and is a leader in many ways for the Penguins.  It’s hard to believe that he’s just two months younger than Sidney Crosby, but he just turned thirty in October, and he’s got four years left on his $6.8M/yr (for the Penguins, thanks again Toronto), so the Penguins will likely benefit from a few more years of 25+ goal, 60+ point production out of Phil the Thrill (who, as you might have heard, can fire the pill).  He’s the team’s MVP thus far this season, so he’s not going anywhere for now.

It’s been another year of consistency from Patric Hornqvist, as he’s on track for another 25/25 season.  He’s also 31 and in the last year of his contract.  If the Penguins wanted to move him, he has a modified no-trade clause.  He’s also not that old, and if he re-signed for another relatively team-friendly contract, it’s easy to see Horny staying in Pittsburgh for at least a few more years.  Unlike his younger peers in the depth chart, Hornqvist is reliable.  So would the Penguins consider moving Hornqvist? Perhaps, but it would take some very dire circumstances to go down that road, and his ability to get in front of goal and pick up the trash is unrivaled by most.  But his best days are behind him, and with Rust, Sprong, and Guentzel bumping him down the depth chart (and other prospects coming along the road), it’s possible the Penguins could move on from him if they fail to return to the playoff picture by the trade deadline. 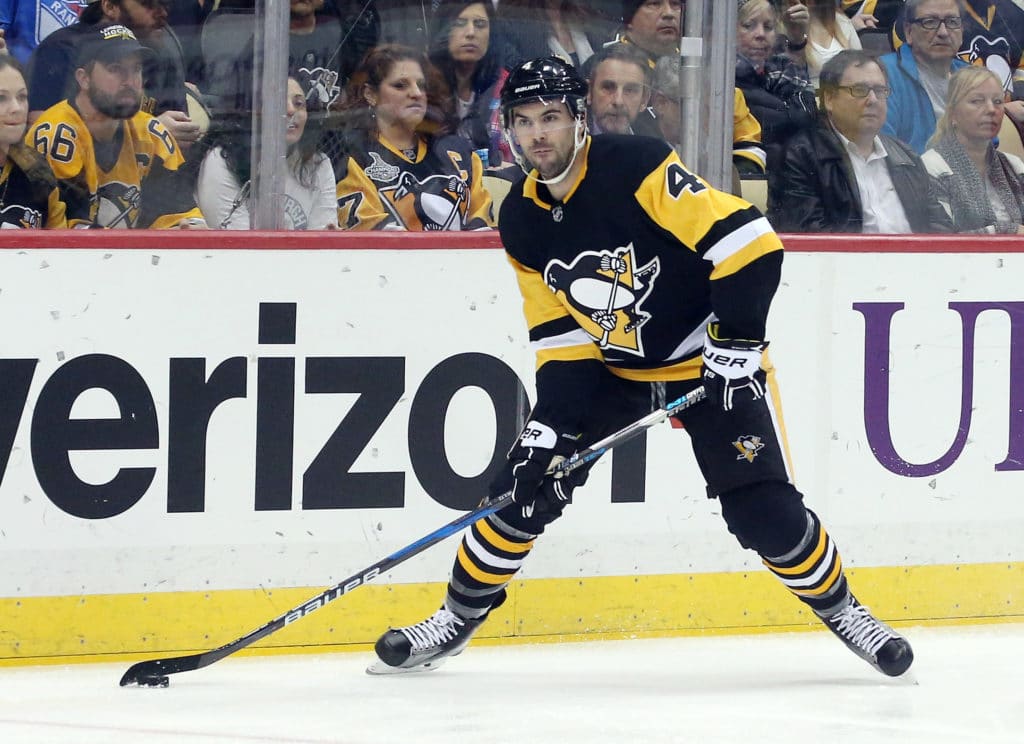 Justin Schultz just started a three year contract this season, so it’s pretty unlikely he’ll be moved at all.  That said, Schultz’s offensive production is way down from last year, and he’s also been on the receiving end of more shots against.  It’s also been a tough year for Schultz on the health front, as he’s missed eighteen games, so perhaps the inconsistency has been a drag for him as well.  His main pairmate has been Ian Cole, but he was paired primarily with Cole last year which didn’t seem to affect his productivity. Perhaps if Schultz can keep himself in the lineup from here on then he can get his season rolling? Nevertheless, Schultz proved last season that he can be the number one defenseman for this team, which might free up the Penguins to make a big move with Letang.